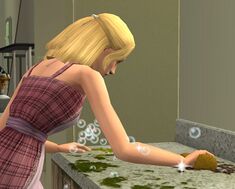 Cleaning is a chore throughout The Sims series, and is also featured as a skill in The Sims and The Sims 2. Most objects, such as toilets, stoves, and sinks, will get dirty over time and will eventually need to be cleaned. Puddles that are created by broken plumbing will need to be mopped. A higher cleaning skill allows Sims to clean objects and mop up puddles faster and more efficiently. Dirty objects and unmopped puddles will lower the environment score of the room[TS1][TS2] and will cause negative moodlets to appear.[TS3][TS4] All Sims aged child and older can clean up most messes, although some messes cannot be cleaned by children. Several social interactions between household member are featured, that allow to tell one another to clean up or take up the garbage.[TS2][TS3]

In The Sims, cleaning is a hidden skill that's mostly used by maids, community lot janitors, Servos and Bonehilda. All playable Sims and townies have the cleaning skill, even if it's zero. However, the skill doesn't appear in the skill panel, and cannot be changed or improved in-game without the use of hacked objects or third-party programs.

It goes without saying that a clean house is a happy house, but Sims should work on their housekeeping abilities to make the cleaning process quicker and easier. They can tidy up around the house to improve this skill; it comes most naturally to neater Sims.

In The Sims 2, the cleaning skill can be improved by tidying up the messes which occur during daily life (for instance, washing counters, appliances, toilets, sinks, and mopping) or by reading a skill book. Sims can also gain cleaning skill points by using certain career rewards, or by filling in holes dug up on the lot. A higher cleaning skill speeds up the cleaning process.

There are several career tracks that focus on building the cleaning skill in order to get a promotion, such as law, medicine, science, natural scientist[TS2:U] and education.[TS2:S] For teenagers, having eight points or more in the cleaning skill will earn them the §750 Kim Metro Prize for Hygienics when they apply for college.

It uses ultraviolet radiation to quickly and easily dust fingerprints everywhere, then display the ironclad evidence right on the viewscreen.

The Prints Charming Fingerprint Scanner is the career reward unlocked when a Sim reaches level 6 of the law enforcement career. It is a pistol-sized gun that looks much like bar-code scanners used by employees in modern supermarkets. If a Sim scans an object that was used by someone recently, that Sim's fingerprints will show up and the Sim's picture will appear in a thought bubble above the Sim using the scanner. If no one has used the object recently, a question mark will appear in a thought bubble. The scanner has a skill gain rate of 250%, and has a fun rating of 4.

In The Sims 4: Bust the Dust Kit, cleaning is expanded upon by allowing entire floors to get filthy, requiring the need to be vacuumed with floor or handheld vacuums. Rooms that go untidy will gradually get stinky and cause uncomfortable moodiest for Sims and generate dust piles. There are multiple additions this grants other pack features: maids will be able to automatically use vacuums by themselves. This includes Bonehilda[TS4:PS]. Robot Vacuums[TS4:C&D] will fulfil the same vacuuming needs without needing a Sim to do it. Cleaner Utili-Bots[TS4:DU] will then clean the dust piles and surfaces.

Dusty level cleanliness is a normal state for a house, this allows Sims to gain relationships as well as fun and social needs gain a little faster. Dust Bunnies appear when a floor is dusty.

Filthy level cleanliness is the worst state for a house, cleaning takes even slower and it is much harder for Sims to clean, Sims will get frustrated or angry from everything being filthy, and Sims who keep cleaning will enter a rage cleaning state where they'll get energy and fun for cleaning as their angriness builds. Dust Bunnies turn into filth fiends in this state.

Retrieved from "https://www.thesimswiki.com/w/index.php?title=Cleaning&oldid=963197"
Categories:
Hidden category:
Cookies help us deliver our services. By using our services, you agree to our use of cookies.