The Bachelor family is said to have descended from a long line of occultists, mystics and decadents. It is possible that they have an alchemist lineage, as Bella throughout several games is implied to be capable of magic while also having an interest in the paranormal and astronomy. In The Sims 2, Simis Bachelor, Jocasta Bachelor, and Michael Bachelor are all dead mostly likely of old age. Bella is missing, having been abducted by aliens, but is presumed to be alive somewhere. In the game, Jocasta and Simis can be seen in the family trees of their grandchildren, Cassandra and Alexander Goth.

In The Sims 3 the prequel to The Sims, Jocasta Bachelor and Simis Bachelor are adults, living with their daughter, Bella Bachelor, who is a child, and their son, Michael Bachelor, who's a teenager. The Bachelor family is portrayed as being a picturesque, tight-knit family. It is clear that the family is close, as all of the members of the family are friends with one another. According to the bio, Simis Bachelor is the head of the household who imposes strict rules for everyone to abide by. Jocasta, meanwhile, is mainly a housewife and stay-at-home mom (even though she has a part-time job, at the book store) to Michael and Bella, the "well-behaved" kids in the neighborhood.

While Mortimer's family appears to be of German and English descent, the Bachelors are suggested to have Southern European and/or Romani heritage as hinted by their names, swarthy features, and Bella's bio in The Sims Bustin' Out, as well as her connotation to the supernatural.

Bachelor: "a man without a wife."
Michael: "who is like God?"
Bella: Italian for "beautiful."
Simis: pun on "Sim is" so that the name reads "Sim is Bachelor." It could, however, be real name in the Sims' universe.
Jocasta: mother of Oedipus in the Greek mythology of Oedipus Rex.
Milton: from an English surname meaning "mill town."
Enriqueta: Feminine form of Enrique, which is the Spanish form of Henry. It means "home ruler." 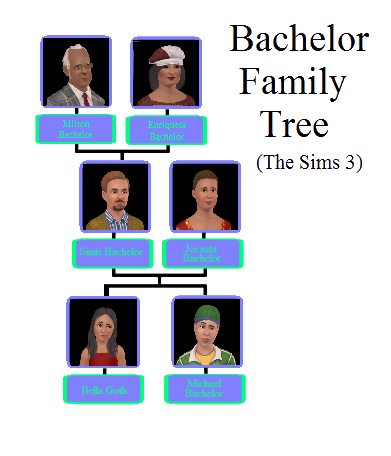 The Bachelor Home is behind the town hall of Sunset Valley, but before The Sunset Valley Cemetery and The Goth Manor. The building consists of three floors, has three bedrooms and three bathrooms.

Greener & Greener, 12 Sim Lane: "This Arts and Crafts style home is family friendly with large rooms throughout its three stories. It features several porches and a sizable backyard with a spacious garden."