A bill is an object delivered to lots on a recurring basis, which requires the payment of Simoleons from the household's financial account. The amount due from each bill is determined by the value of the lot, including all items on the lot. If there is not enough money in the household's account to cover the cost of the bill, the bill cannot be paid.

Bills are delivered by a mail carrier to the lot's mailbox. Once delivered, a Sim must be sent to retrieve the bills, and to place the paid bills back into the mailbox within a fixed number of days. Neglecting to pay bills will result in negative consequences for Sims. How often bills are delivered, the amount of time given to pay them, and the formula used to calculate them varies between games.

In The Sims 2, bills are delivered to the lot's mailbox on Tuesday and Thursday at 10:00 am. As in The Sims, bills must be removed from the mailbox before they can be paid, but unlike The Sims, children cannot do this. Sims may get the bills from the mailbox autonomously, but usually will not. Teens and older Sims can pay bills, but will not do so autonomously.

The way the bill is calculated is as follows:

Things that do not have a value in build/buy mode when selected do not count. In addition, items held in personal inventories also will not count.

In Mansion and Garden Stuff, purchasing green energy sources can decrease the amount owed in bills. Purchasing multiple sources decreases that amount further, and can eliminate bills or even generate a credit back into the household funds. In these cases, the bills will not be delivered and a notification will show how much was earned in credit. 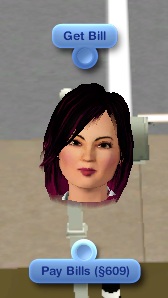 The options when clicking on the Mailbox in The Sims 3

In The Sims 3, bills are delivered to the lot's mailbox on Monday and Thursday at around 8:00 AM. Teens and older can pay bills.

The "Pay All Bills" feature has returned from The Sims 2: Seasons and can be chosen from the pie-menu on the mailbox.

In World Adventures, bills and the repo-man can be "devastated" using the 'No Bills Ever' lifetime reward. This costs 15,000 lifetime happiness points.

As in The Sims 2: Mansion & Garden Stuff, it is thought that purchasing "green sources" in Ambitions can help reduce the bill amount, by 0.2% per solar panel and up to 2% per windmill.

In The Sims 4, bills come once per week. Bills can be paid with a cellphone, a computer or the mailbox. They can be paid by a Sim who is a teen or older. They also appear to be more expensive than previous games. Unlike previous games, items kept in inventory will still count towards the bills.

A trait called "Frugal" can be purchased from the aspiration reward store that will reduce the amount needed to pay off the total bill by 25%. The effect will stack with multiple Sims having the "Frugal" trait.

A Lot trait called "Off-the-grid" will reduce the lot taxes by 25% from the target residental lot. However the power and water will not work until the household generate their own utilities, which means no utility bills. 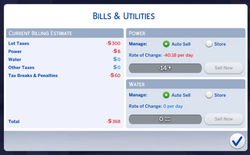 In Patch 95, bills get an update where players can see a more detailed view of their weekly bills, as well as be able to see current bill status before needing to pay. Players can now manage power and water storage.

Some build mode items have the tag "Bill Surcharge Item" and "Bill Discount Item". This will increase and decrease the bills needed to pay. This feature can be disabled in the gameplay option menu.

With City Living, Sims residing in apartments and penthouses will have to pay rent, although the rent is included in the bill and is not delivered separately, unlike The Sims 2: Apartment Life.

With Discover University, Sims partaking in a degree at University will have to pay student loans, if the loans aren't paid of in time, the repo-man will come to collect a random item of similar value to the loans.

In The Sims, The Sims 2, and The Sims 3, bills will begin to change colors as they become overdue. Bills start out as a white color, then change to yellow, then orange, then eventually red. After several days of non-payment, a notification will appear warning the player of the delinquency. In The Sims 3, the player is given the option to pay the bills immediately from the notification.

If the bills are not paid before the end of that day, the bills will explode and a repo-man will arrive on the lot and repossess items roughly equal in value to the debt owed and in some cases more. In The Sims 2, a visit from the repo-man will incur a bad memory on members of the household involved. The repo-man in The Sims 3 will repossess the item that is closest to the debt but not under it, meaning he will almost always repossess items that are worth more than the amount that was due.

In The Sims 4, if a bill isn't paid within 48 hours, electricity will be cut off until the bills are paid, meaning that all electrical appliances, electronics and lamps will cease to function. If the bills remain unpaid for another 48 hours after that, the household water supply will also be cut. The disconnection of utilities will also extend to retail and restaurant lots owned by the household. Prior to patch 95, no repo-man will come, unlike previous games, therefore the shutting off of utilities is the most serious consequence. However, patch 95 added the repo-man to The Sims 4 - should bills remain unpaid 48 hours after shutting off water supplies, repo-men will come to the house and repossess items, like previous games. If the Sims live in an apartment, failure to pay the bills may result in the landlord refusing to look at problems with the apartment.

Retrieved from "https://www.thesimswiki.com/w/index.php?title=Bill&oldid=966675"
Categories:
Hidden category:
Cookies help us deliver our services. By using our services, you agree to our use of cookies.