Chemistry tables are objects featured in The Sims: Livin' Large, The Sims 3: Generations and The Sims 4, which allow Sims to craft drinkable potions with various effects.

The "Concoctanation Station" is an item that was added in The Sims: Livin' Large. When used, the player cannot select which potion will be made.

After a potion is made, another cannot be made until a Sim drinks it. Guests may drink potions, but NPCs will not. There is no option to dispose of the potion once brewed. If the player does not wish for any Sim to drink it, they must sell the Concoctanation Station and buy a new one.

A Sim needs at least one cooking point to be able to use this item. Using this item increases a Sim's logic skill. However, if the Sim using it has a low logic skill, potions being made can easily blow up in the Sim's face, or go drastically wrong, creating a horrible smell that will waft around the neighborhood, causing the police to appear and fine the Sim §500 for doing so. Having a full logic skill (10/10) greatly reduces but does not eliminate the possibility of explosions or release of stench. If a Sim brews or drinks a potion outside during school hours, the police will fine the player for pollution.

If a guest drinks any potion in the chemistry set, they will suddenly walk out of the house and cannot be interacted with.

The potions and their usages are as follows. 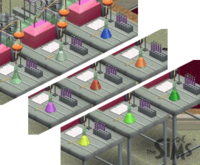 Chemistry tables have been reintroduced in The Sims 3: Generations, and can be used to craft potions. Children and older can use the table, and using it increases the logic skill.

Sims with any logic skill level can use the chemistry table, but they will not be able to discover a new potion until they are at least level 1 of the logic skill. Initially discovered potions are free, however they require a certain amount of money if recrafted.

There is a chance for the chemistry table to explode when using it. If it explodes, Sims can get caught on fire, and as a result they can get killed.

Chemistry tables can only be used by children in The Sims 4, but the potions they craft can be given to older Sims. Using one raises the mental skill and, if it is maxed out, the logic skill as well. If no potions have been discovered, there is simply the option to experiment with the table.

The potions that can be crafted with a chemistry table are:

Retrieved from "https://www.thesimswiki.com/w/index.php?title=Chemistry_table&oldid=950366"
Categories:
Cookies help us deliver our services. By using our services, you agree to our use of cookies.