The Cordial family is a pre-made family residing in Belladonna Cove that came with the Apartment Life expansion pack. The Cordial Family includes twin sisters Samantha Cordial and Kimberly Cordial. The purpose of the twins is to show players the new magic system as both twins have befriended two witches – one of light and one of darkness. Samantha Cordial is the "nice" twin who has made friends with the good witch Phoebe Adams. Kimberly Cordial on the other hand is the "mean" twin who has made friends with evil witch Frances McCullough. They appear to be parodies of the Pleasant family in multiple ways, such as the teenage sibling rivalry and the opposite personalities of the twins. The Cordial family house has a floorplan very similar to the Pleasant family of Pleasantview, though the section is smaller, and the "pleasant, little town" could refer to Pleasantview, the Pleasants' hometown. Also, the names and appearances of the ancestors of the twins match the names and appearances of the ancestors in the Pleasant Family. If so, then the Cordial sisters could also be a foresight into Angela and Lilith Pleasant's futures.

Coridal: "of or for the heart," "heartfelt, from the heart" 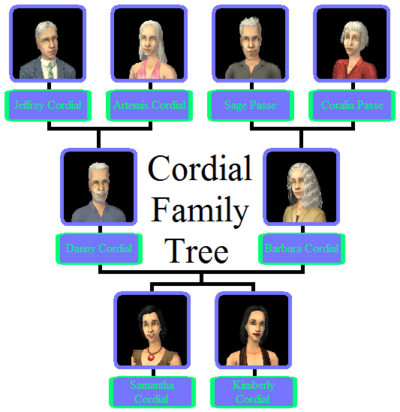