The Dean family consists of a father and son; Bennie and George Dean. They no longer live together as Bennie moved in to Grandpas household and George lives in an abandoned firehouse in the town of Riverview.

Bennie took his wife, Lonnie's, death badly and is trying to recover from the shock, while his son is determined to help others, supposedly so they don't die either. Bennie relies on George to help him through life and George often visits his father because of his unconditional love for his family.

Bennie's current job is as a Produce Quality Assessor at the grocery store, although he used to be employed as a firefighter. His son George is employed in the Law Enforcement as a Patrol Officer.

George is particularly good friends with Hal Breckenridge and Walter Grisby, while his father only seems to enjoy the company of the Spenster family; the two elderly sisters, Lucille Spenster and Nellie Spenster, who live next door, and his roommates; Melvin Taft and Henry McGlum. 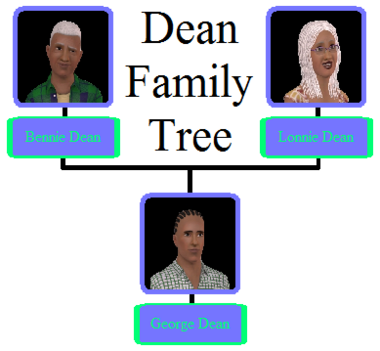 Retrieved from "https://www.thesimswiki.com/w/index.php?title=Dean_family&oldid=452129"
Categories:
Cookies help us deliver our services. By using our services, you agree to our use of cookies.