From The Sims Wiki, a collaborative database for The Sims series
< Fanon:Amar's Hangout
Jump to navigation Jump to search

The following was posted on ModTheSims on August 8, 2019. The original post can be found here.

I was never a really good builder. At least, I never considered myself to be one. When I had some time off recently, I played the Newbie family and brought them over to Amar's Hangout, and suddenly felt really disgusted by the layout. The lot had been expanded a lot since it initially opened for business, and many of the new additions were simply slapped on top of the old structure, leading to a general lack of consistency and a sense of things being unplanned (because it really wasn't). The lot needed some serious modifications to keep me from grinding my teeth just looking at it. Perhaps it needed another expansion too. Maybe even make it more accessible to the disabled Sim! 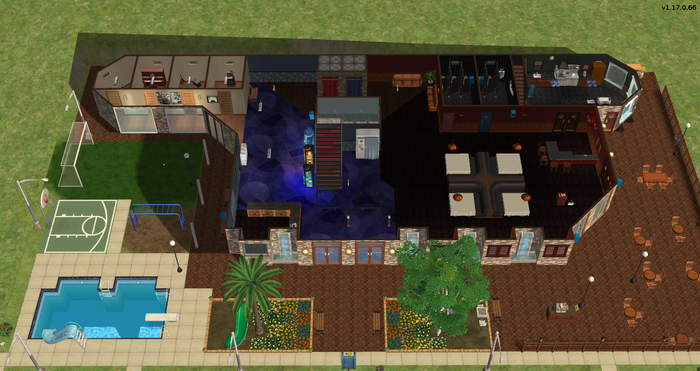 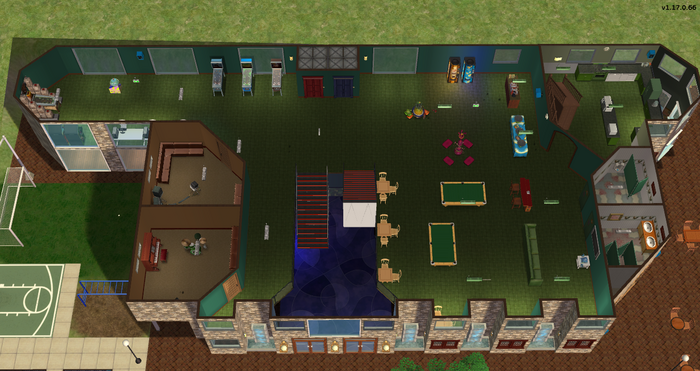 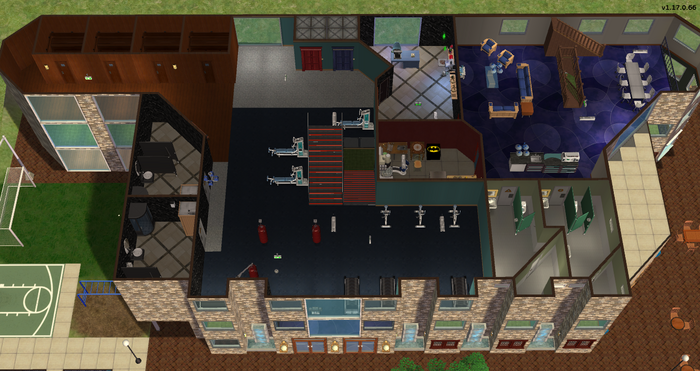 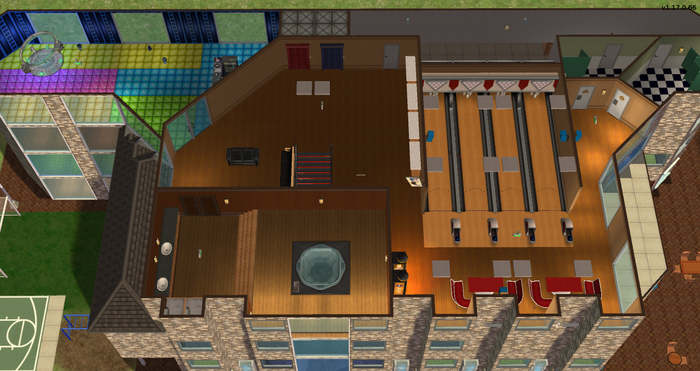 From the outside, not much appears to have changed... 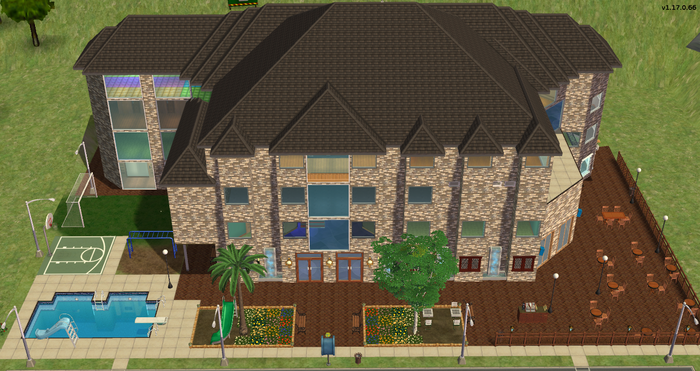 ...but when you walk in, you'll notice something different right off the bat: half of the stairs are missing! 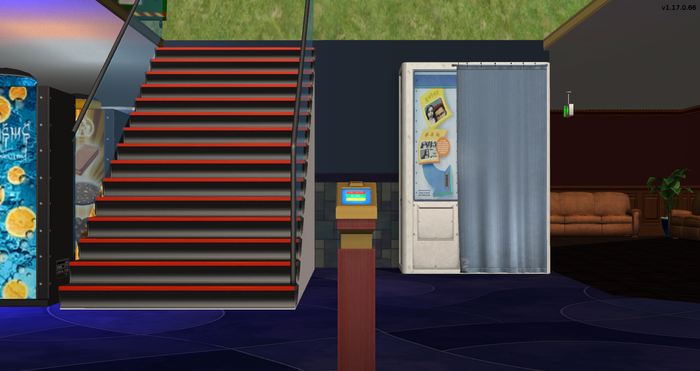 Not missing, exactly. You'll see why they're no longer there when you go upstairs. For now, though, just walk over to the other side of the stairs to see the shiny new additions to the hangout: elevators! 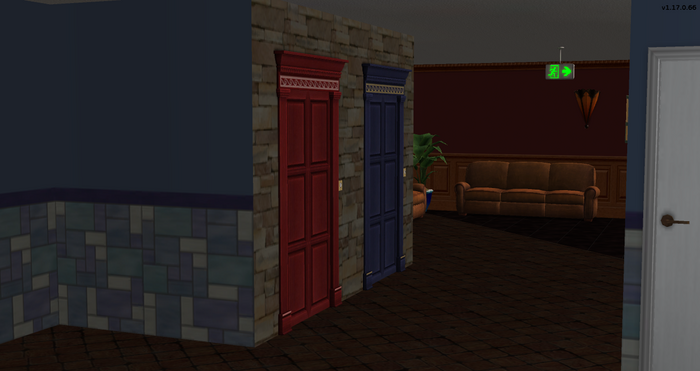 Elevators are a surprisingly uncommon sight in community lots around SimVille. If wheelchairs and crutches were a thing in The Sims 2, then perhaps we'd be taking accessibility into account when building. Sadly, they are not, and elevators are more of an unnecessary extra for buildings that don't exceed more than four stories. But as Amar's Hangout was going to be a proper community lot with facilities, it made sense to plop some elevators in. Besides, that sad fishing pond that once stood here wasn't being used at all. 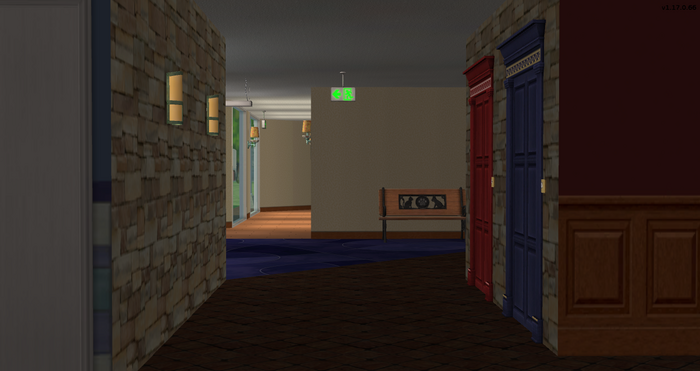 Up on the second floor, you'll see a new pool table, a dartboard, and a MYSHUNO! machine, so that there are more options on offer here. 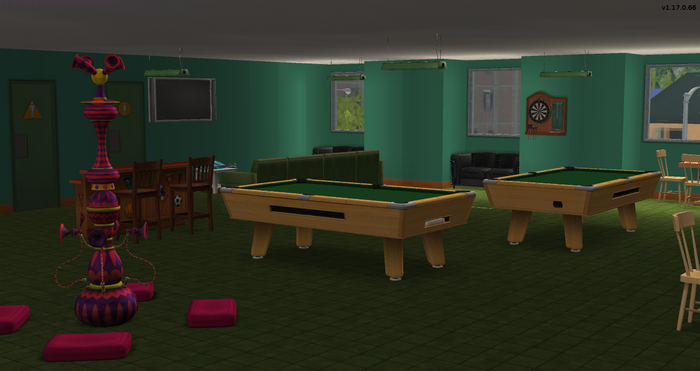 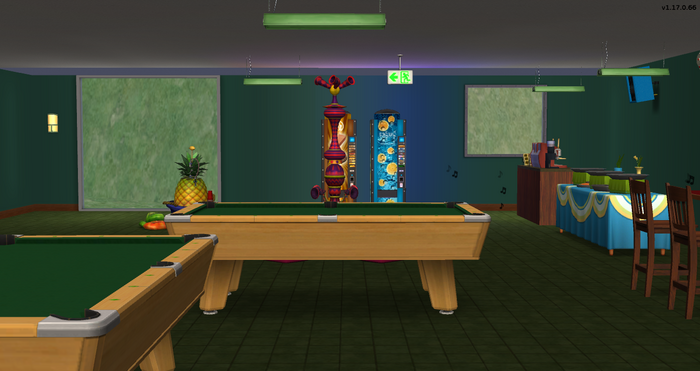 The west wing of the second floor looks mostly unchanged, except for the fact that the misplaced stairs here are no longer here. That's because... 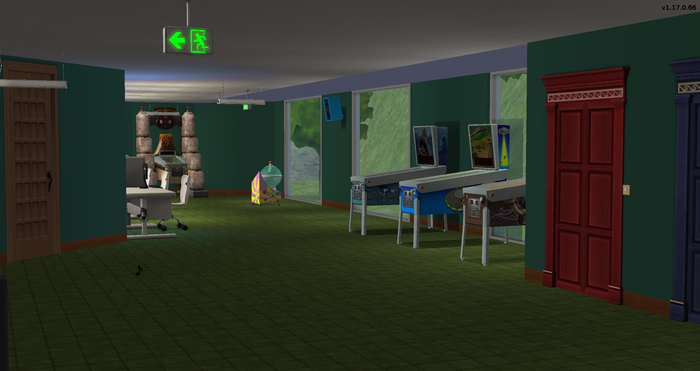 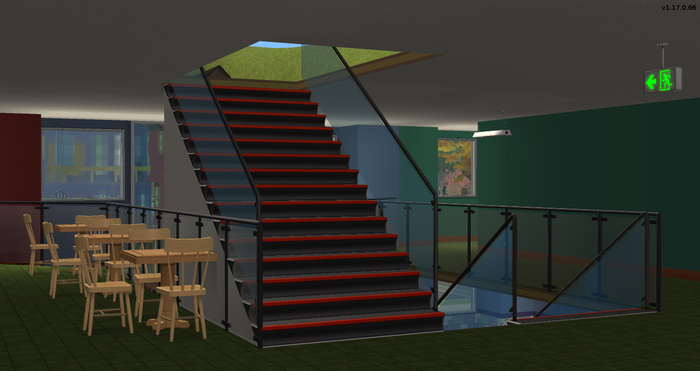 The new set of stairs leading up to the third floor cuts into the gym, so a lot of furniture had to be moved around. The bathrooms were moved to the exterior walls in order to give the gym more space. A few new punching bags were added. 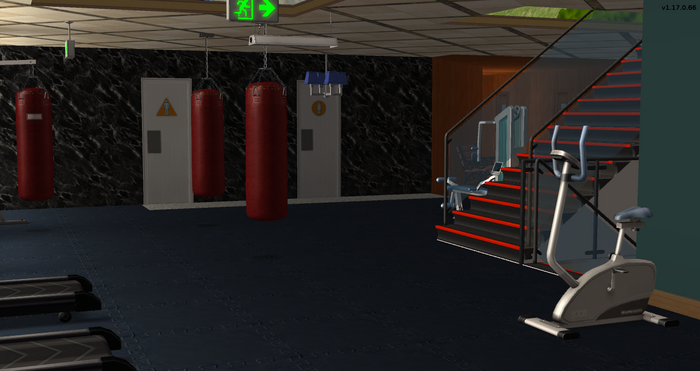 The third floor west wing used to be where the dance floor and DJ booth were located. Don't worry, that hasn't gone away. As gym-lovers probably prefer a sauna over loud music after a long workout session, Amar is proud to provide public saunas—the only ones in SimVille so far. 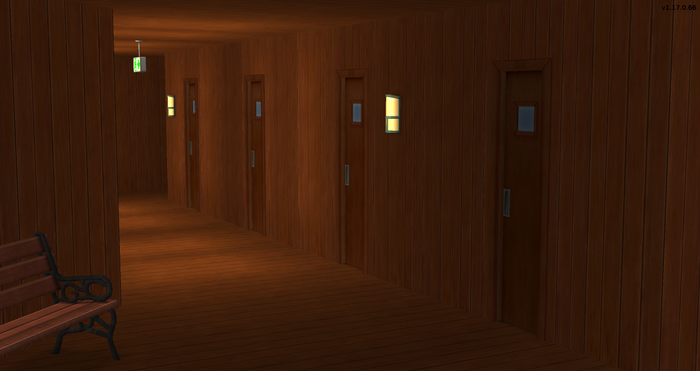 The old crafting room is now even smaller; it now serves only as a messy storage room of a short-lived past. Amar doesn't seem interested in using this space for actual crafting any longer, preferring to move the crafting operations to his other business lots. 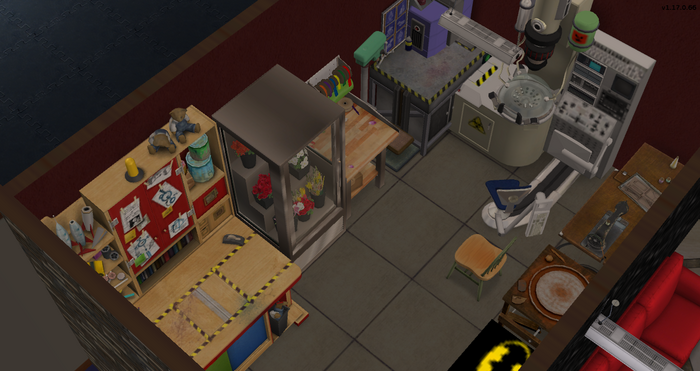 Amar decided it was time to expand his hangout and built a fourth floor on top. The main highlight? Bowling alleys. 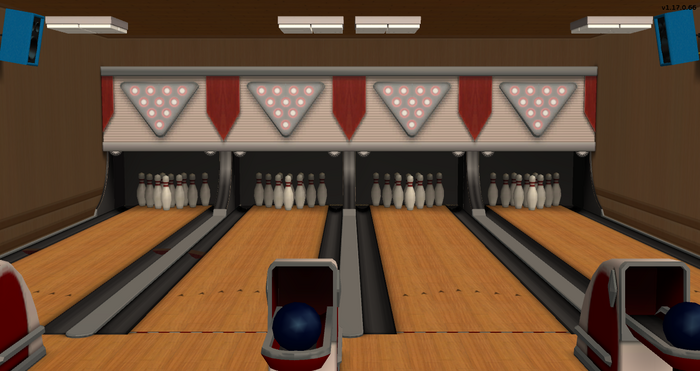 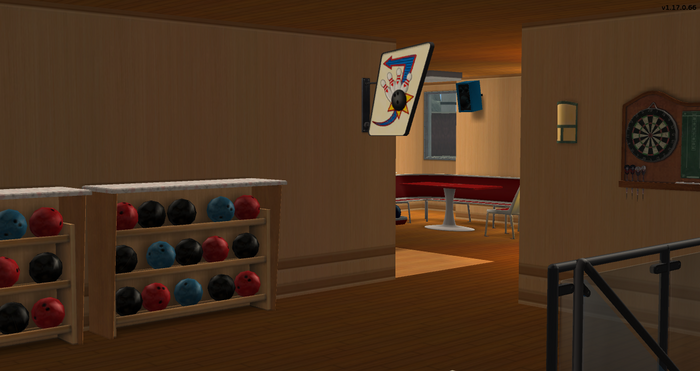 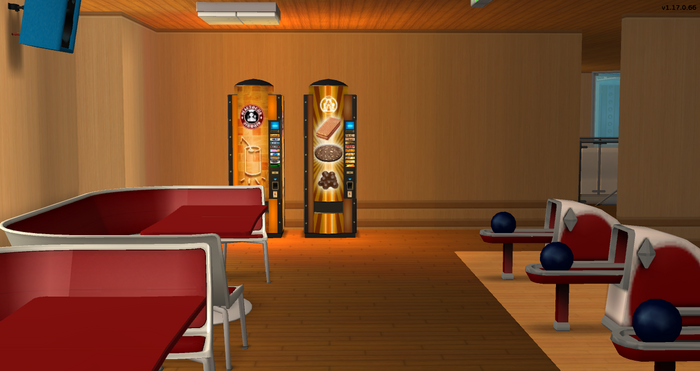 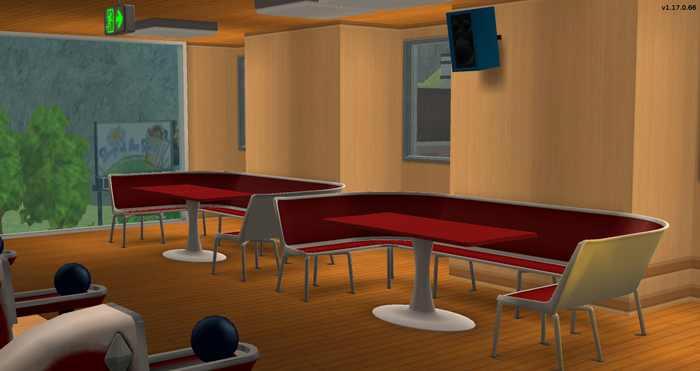 Next to the bowling alleys is a hot tub, at long last! Overlooking SimVille from the fourth floor, it ain't a bad view. 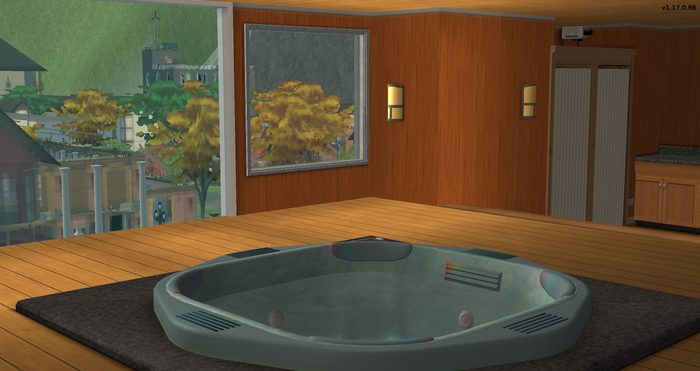 The dance floor and DJ booth now find their home on the fourth floor, together with other appropriate entertainment facilities. 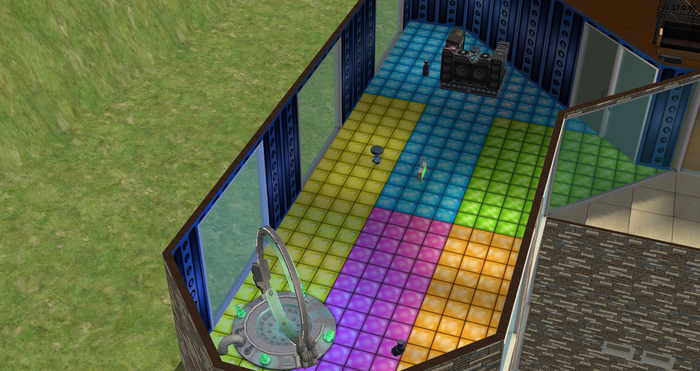 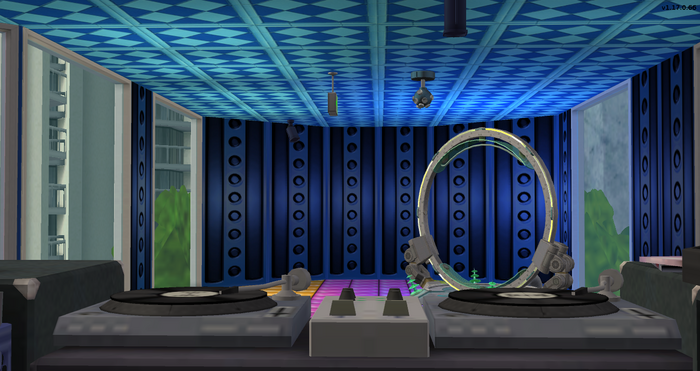 There were a couple other minor changes to the lot as well: