Amar has a passion for cooking (as well as just about everything!). Come on in and at least catch a sniff of the delightful aromas that fill the air!

Amar's Restaurant is a community lot in SimVille, owned by Amar Newbie.

It is the only lot in SimVille with a "true" basement that was built underground.[n 1]

The following was posted to ModTheSims on June 21, 2017. The original post can be found here.

We're going to take a look at lots again. Next up: Amar's Restaurant 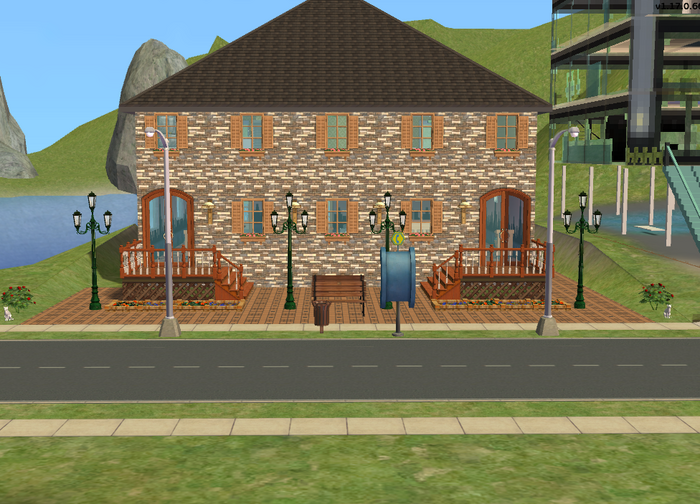 Amar has a passion for cooking (as well as just about everything!). Come on in and at least catch a sniff of the delightful aromas that fill the air!

For a town of its size, SimVille sure has a lot of restaurants. There's Bernard's Botanical Dining, Restaurant 'Down The Bridge', and Cooke's Place, three dedicated restaurant lots that see quite a bit of business during the day. There's a bistro on the second floor of Wellness Center 'H.E.R.E.', as well as the spacious restaurant in Amar's Hangout. When Amar opened this restaurant, people thought he was crazy; could he really compete against all of these other restaurants? The restaurant in Amar's Hangout, while critically acclaimed, sees very little traffic during the day, except for evenings and weekends. But Amar was determined to make his robot vision come true (I assure you that Amar is not Skynet, and is not plotting our demise), and when the county expanded the boundaries of SimVille and permitted the town to expand across the river along the once lonesome stretch of SimVille Street that fringed the lake and hills, Amar picked a cozy corner, near where the road turned, as his restaurant's home. 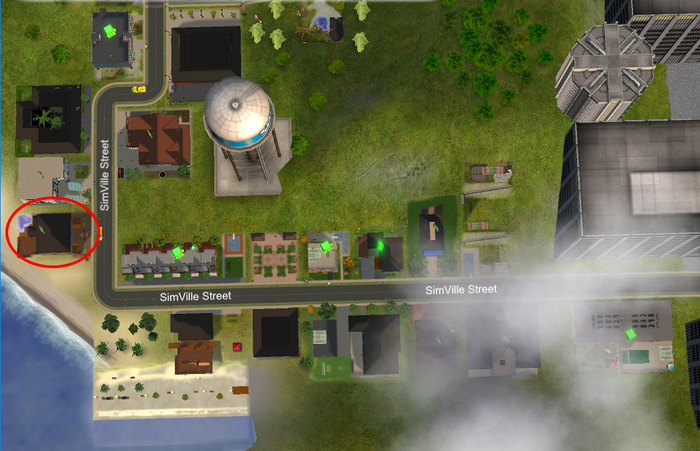 SimVille grew quickly, and Amar's once "naked" restaurant was quickly surrounded by newly-erected buildings. Though it's still a little bit of a walk for Sims living inside the old part of SimVille, they were quick to agree that Amar's Restaurant was "well worth the walk as well as the wait". And wait they did: a few days after Amar opened his restaurant, the place was so busy that Sims were seated on the curb, eating from their laps. The restaurant never did see such a successful (or horrific) day again, but it's still quite popular, and has certainly earned its place in SimVille's culture. 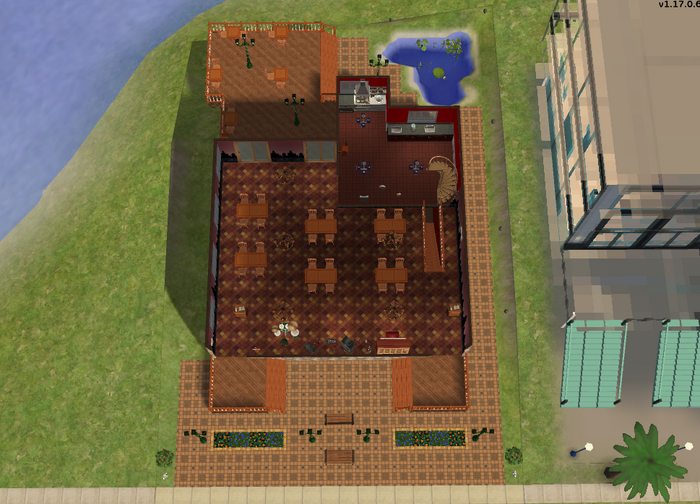 Pretty much everything you need to have a great dining experience at Amar's Restaurant is located on the first floor. The dining room, while not the grandest, is comfortable and airy. The kitchen has seen some expansion to accommodate the employees. And of course, there's some entertainment too.

Two doors lead into Amar's Restaurant, and each door is staffed by an enthusiastic host that helps customers find their way. No more shuffling around to ask for a table for two... just be sure not to block the doorway so other Sims can come in. 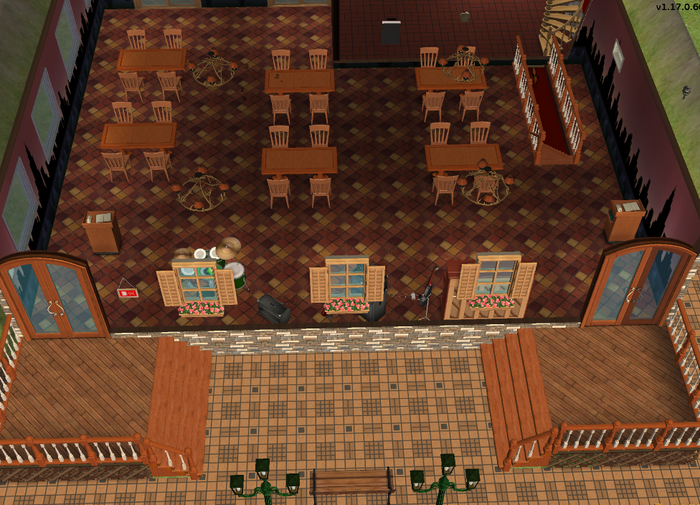 The dining room has received numerous reviews alone. Critics say that it's an "interesting blend of rustic living combined with the sights and sounds of the city." One famous restaurant reviewer wrote: "Amar seems to be trying to tell us something here. Perhaps he's declaring to the last rural holdouts that the city was nigh and it was time to surrender. Or maybe he's actually showing us the strong resilience of the countryside's resistance to urban sprawl—for while the city has surrounded the last plot of 'vacant' land, nature refuses to let Sim-kind have it." Whatever the case may be, it's a popular atmosphere. 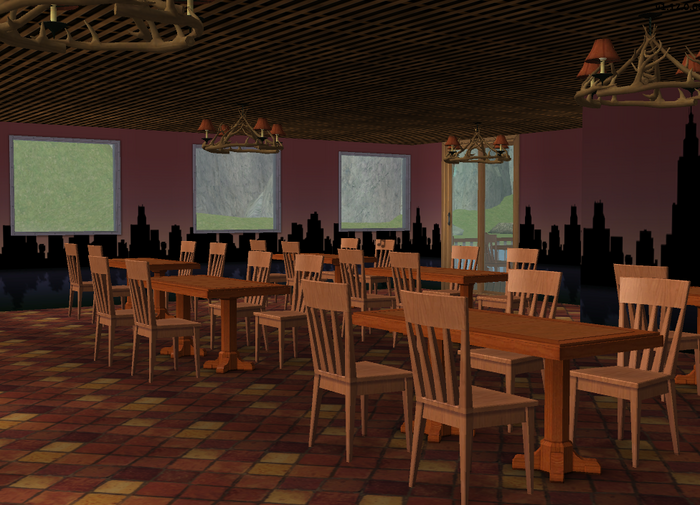 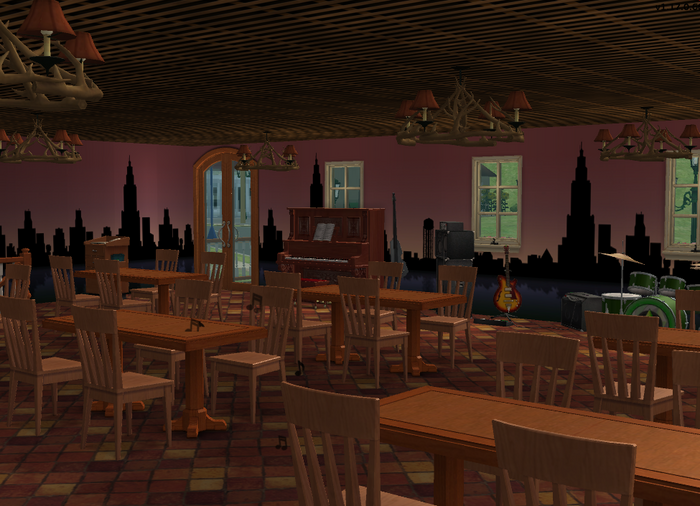 Near the front of the restaurant are four musical instruments in the dining room. This is where The Servo Band performs in front of all the customers, and it's the only one of Amar's businesses where the band actually performs in on a regular basis. Every day, from 11AM to 11PM (the restaurant's opening hours) the band is here, playing jazz or country for tips. Given how restaurants don't tune in much of a profit, the tips definitely help with the cash flow of the business. The dining room used to have R&B music playing in the background, but that was removed in favour of a live band of Servos. Amar's Restaurant has a manager that runs the business for Amar, leaving the Servos free to perform here. 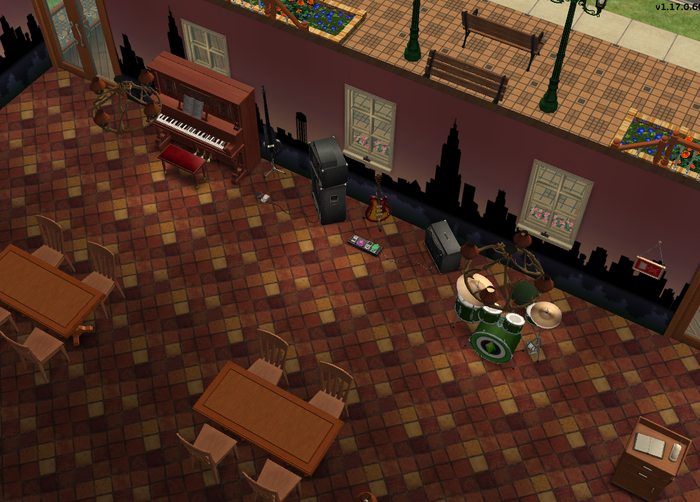 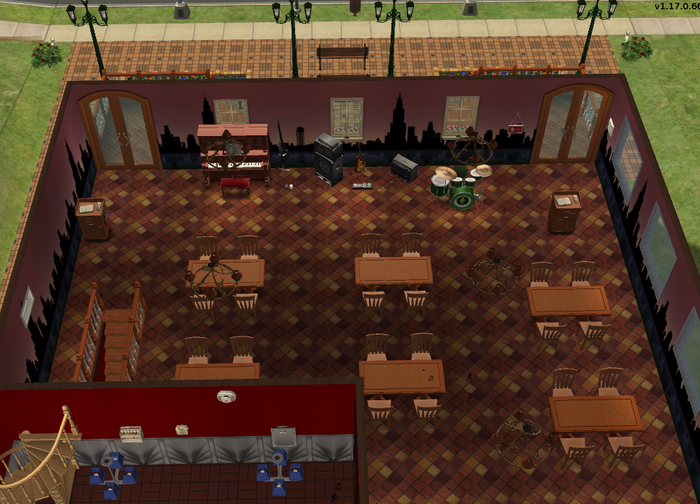 There's a patio at the back of the restaurant that provides additional dining space. The patio faces Lake SimVille, a small lake that is filled and drained by the mighty Tasman River. On a warm SimVille evening, couples frequently fight for reservations at these tables, hoping to enjoy a nice evening meal facing the lake and the river. Some families in SimVille, however, aren't too pleased that there aren't any "family" tables out on the patio. Amar might decide to add those in one day as the population in SimVille grows. 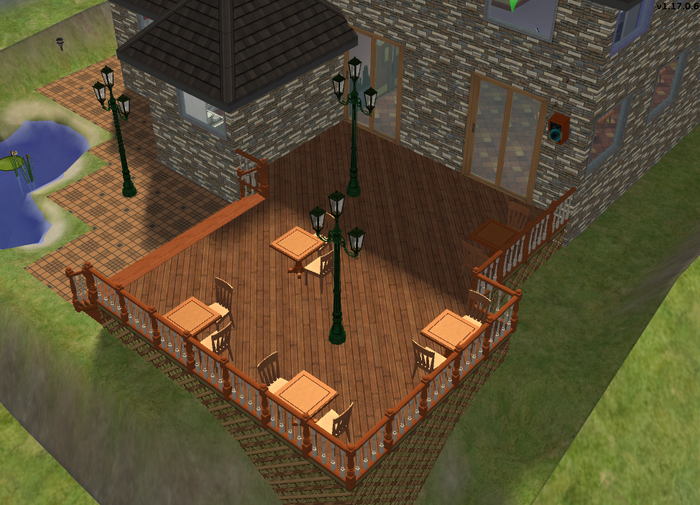 You can see a strange temple across the lake from here. Archaeologists have concluded that an ancient tribe constructed it as a sacred place of worship for their polytheistic religion. The tribe was destroyed when Admiral Landgraab conquered the area, but he had no interest in pillaging the temple, so it's been left to the elements for hundreds of years. The temple is protected by the government and is off-limits to the public. 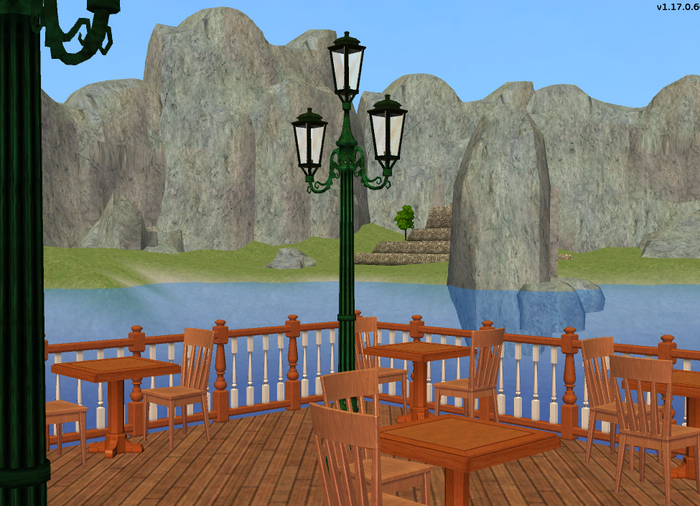 There's a small pond here that Sims can fish in. Unlike the pond at Amar's Hangout, this one sees a bit more traffic. Some couples like to fish together after a meal. To encourage people to fish, Amar's Restaurant allows Sims to fish for their meal in the pond; once a Sim or family is satisfied with their catch, the restaurant will happily prepare the meal for them at half the regular price! It's mostly a program geared towards families, giving children an opportunity to entice their family to eat something that they played a role in making. Of course, if you're not interested, you can just fish in the pond and keep your catch for free. 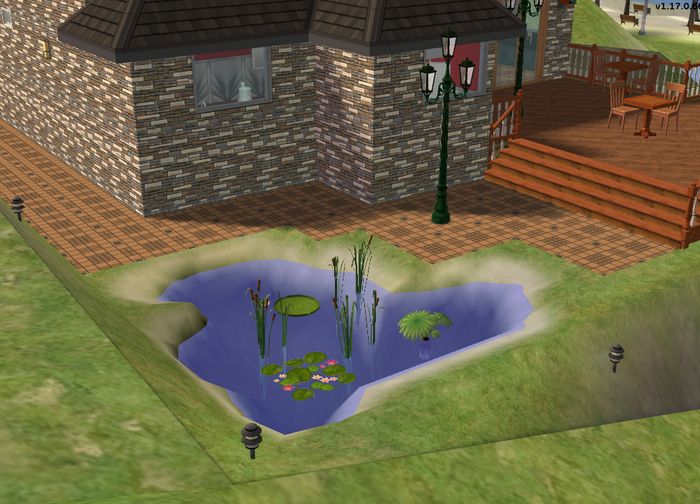 The kitchen used to be much, much smaller, but as the restaurant grew in popularity, the teeny tiny kitchen that was never big enough couldn't handle all of the traffic. It was frequently hot, crowded, and messy. Amar knocked a few walls out and expanded the kitchen, giving the employees in there more room. It's still hot, but at least it's no longer crowded, and it's much easier to clean than before. 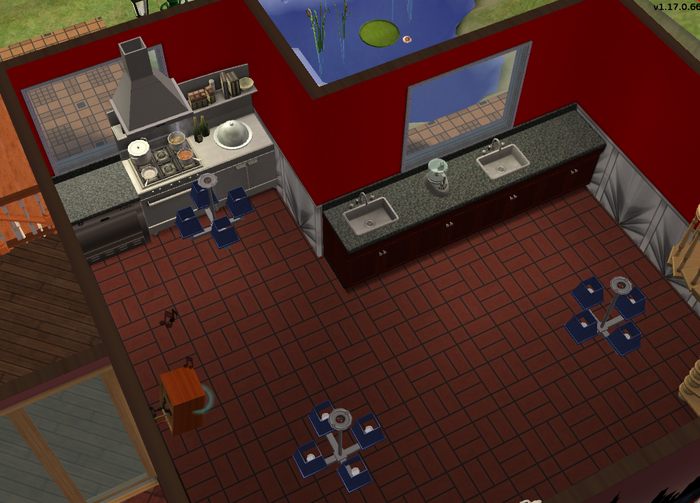 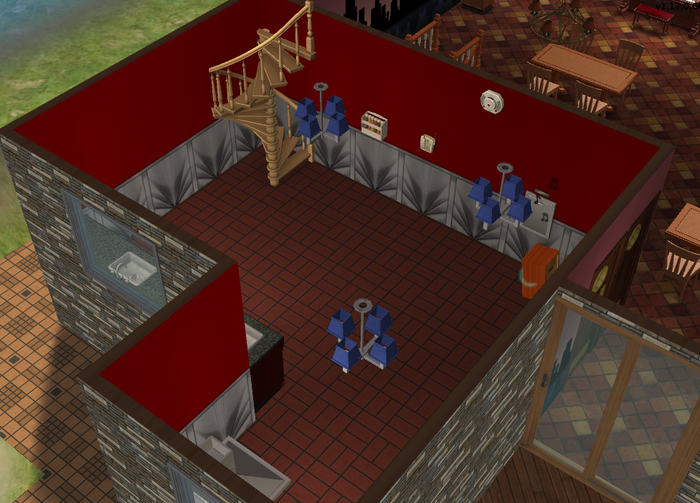 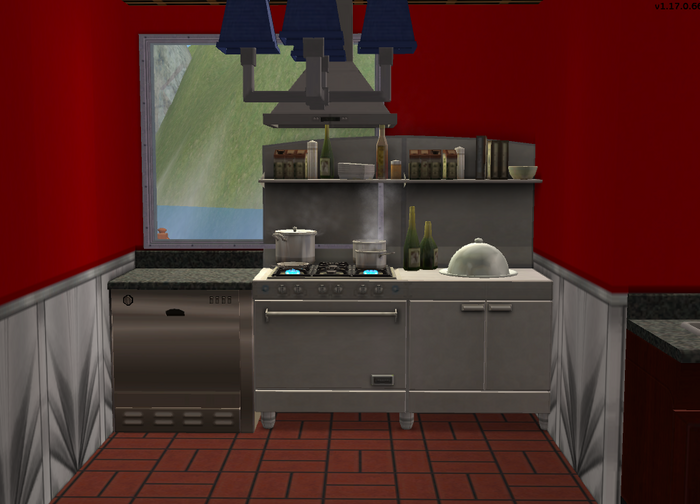 You may have noticed a set of stairs leading down from the dining room. Amar's Restaurant is the only lot in SimVille that currently has a basement,[n 2] and while it doesn't have any dining tables and chairs, it certainly does give Sims an excuse to linger around after their meals for a little bit longer. Outings and parties make good use of the space. 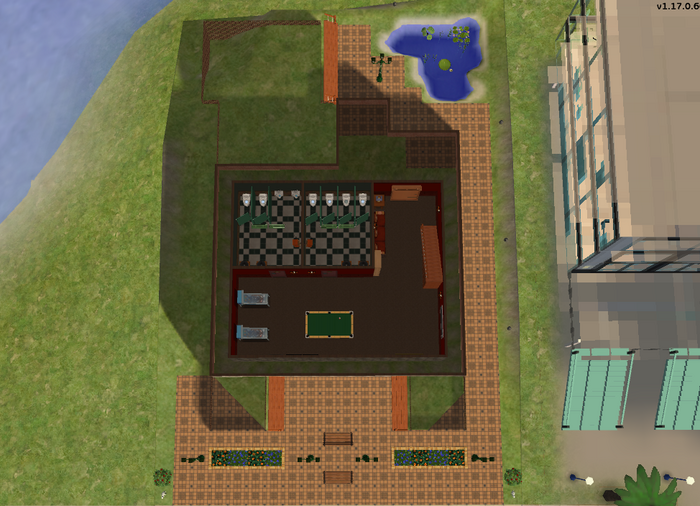 Near the bottom of the stairs are a few bookshelves and a sofa, intended for the Sim that just wants a book to read while they recover from their overindulged stomachs. It's small, but it works. 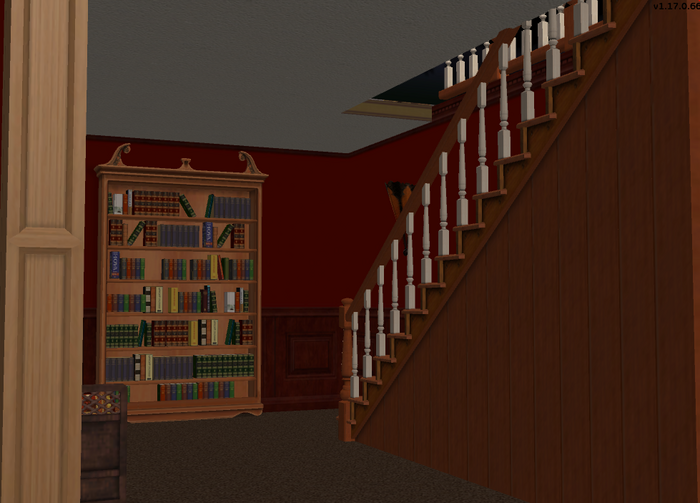 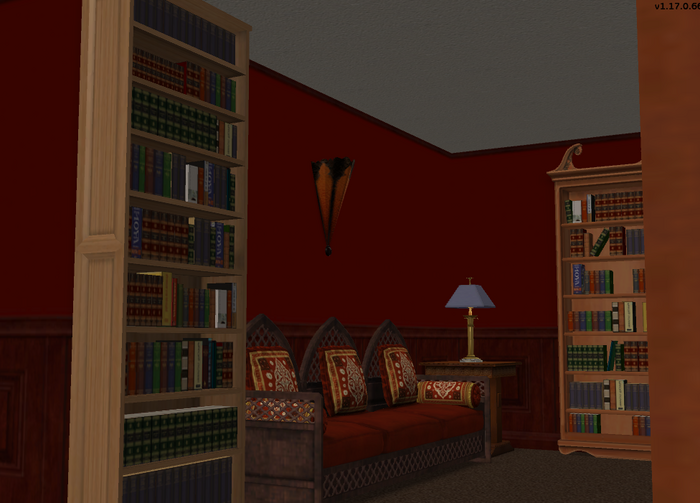 There's a TV and a pool table for the socialites that think books are a silly way to pass an evening with. 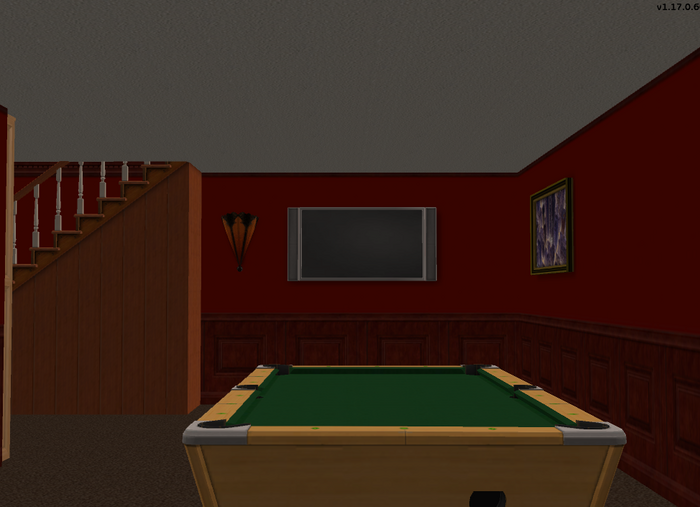 Sims who like to have fun but aren't into social activities have two pinball machines at their disposal. 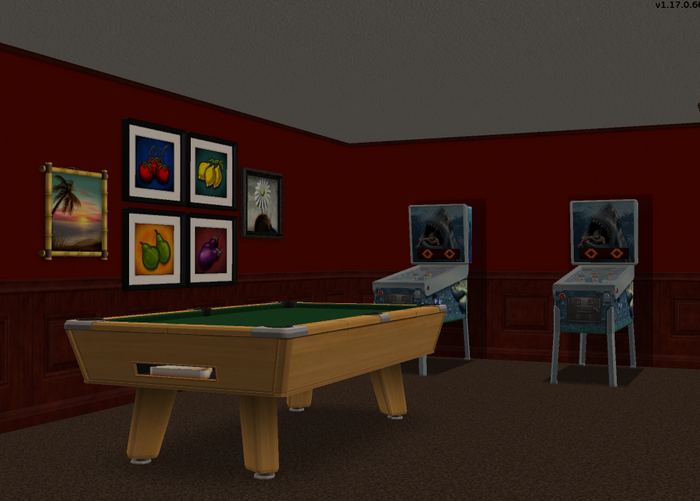 The public bathrooms for the restaurant are located in the basement, as is usually the case in small, family-owned restaurants in older parts of towns and cities where the density is greater and there just isn't enough room on the ground floor for a public bathroom. This isn't one of those restaurants, but the dining room needed expansion not too long after the restaurant opened, so Amar built a basement and moved the bathrooms downstairs. 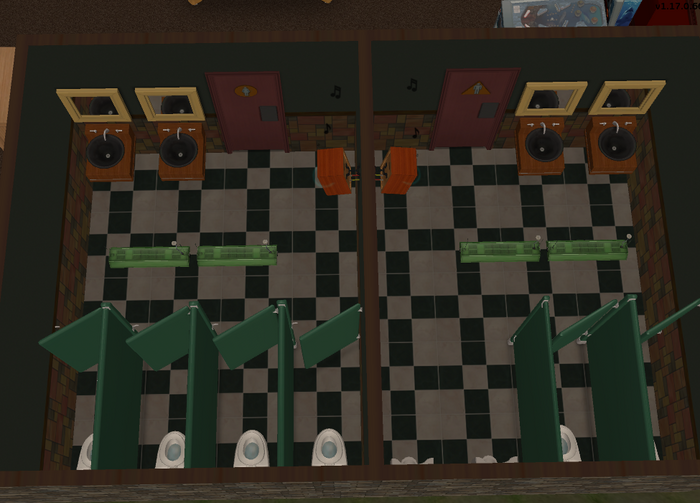 There's a spiral staircase leading up from the kitchen. The kitchen is off-limits to customers, so the stairs and the floor they lead to are naturally off-limits as well. There's not much to see up here—mostly because you can't come up here—but if you work here, you certainly know about this place. 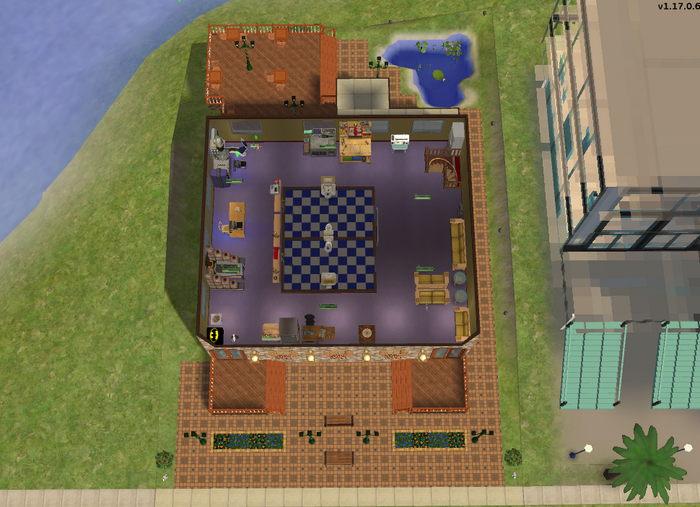 The second floor is a bit plain and ugly, but at least there's a TV, some couches, a stereo, and even a food replicator I got off the Booty. 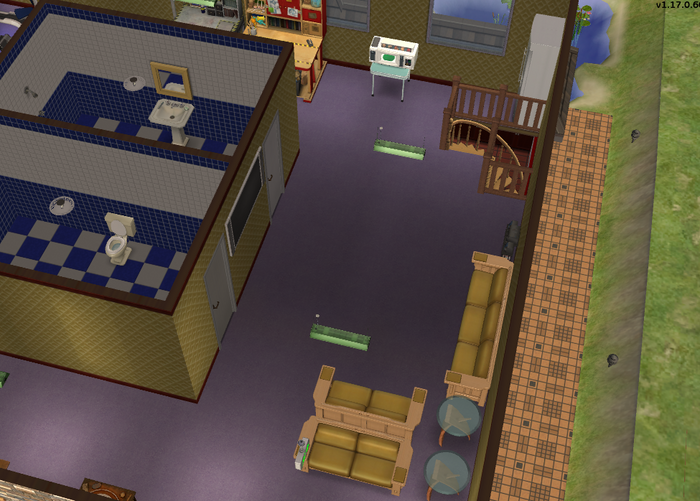 Two bathrooms are available for the employees. They each have a sink, a toilet, and a shower. They're not as nice as the ones in Amar's Hangout, but they work. 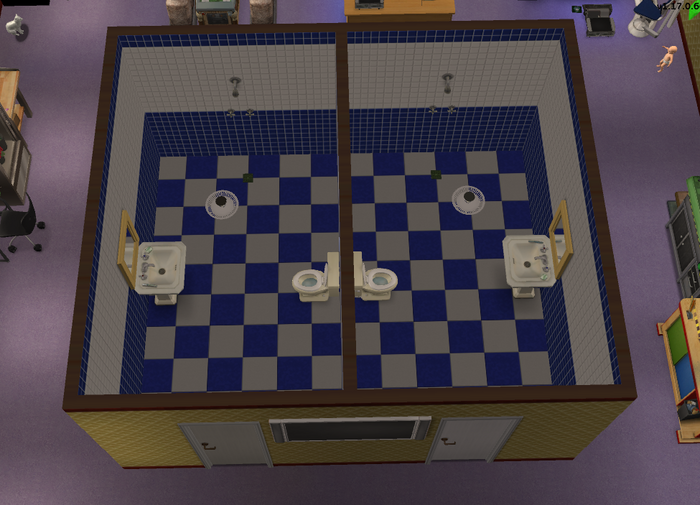 The office is located here (Although offices aren't needed here anyways, considering how Sims don't need to do paperwork or any of that boring stuff). It's also where I stash objects like the FFS Lot Debugger here... and the InSimenator? Hrm, so maybe I'm not really an honest gamer. 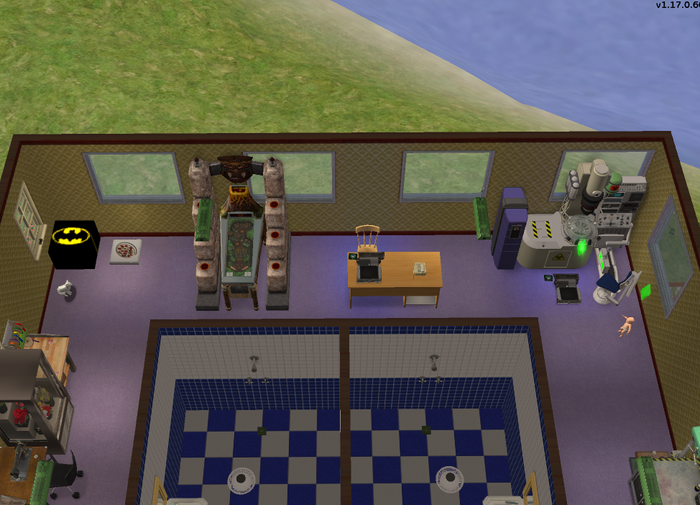 Interestingly enough, there are also a few crafting benches here. This was mostly meant for the Servos, who could run upstairs and make a few things for Amar's other businesses during off-peak hours. With the addition of The Servo Band, however, these benches are again gathering dust, and are unused for the most part. Still, if you buy something from Amar and notice a "Made at Amar's Restaurant" label on it, this is why. 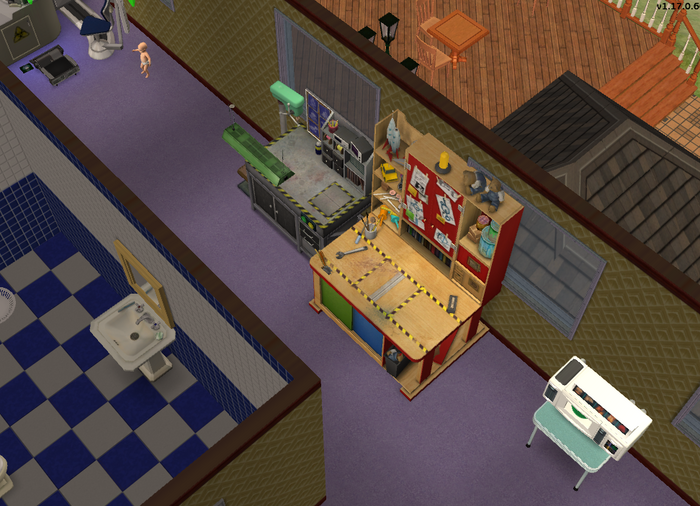 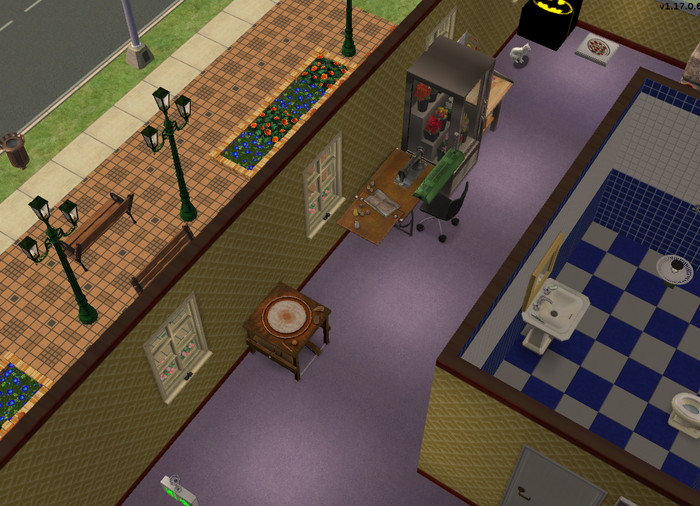 Amar's Restaurant is SimVille's most critically acclaimed restaurant, and sees the most traffic out of all. Sims love the atmosphere, the patio, the music, and the menu: the restaurant has the largest selection of food in the hood, and offers them all at a competitive price. Amar's Restaurant is located near some of the cheapest apartments in SimVille, and the Sims there sure do love Amar's reasonable prices. While it may not be as lavish as Restaurant 'Down The Bridge', for most Sims, Amar's attempt at getting into the restaurant industry more than exceeds their expectations.