Christian Day is a Sim in SimVille. He is an illegitimate son of Cody Day and the second oldest half-brother of Jaden, Ethan, Bradley, and Taylor Day.

Christian wants to find his mother someday in the hopes that she'll take him in again. In the meantime, however, he's comfortable with his half-siblings, and while he doesn't see himself as a parental figure like Jaden does, he's mature enough to clean up after himself.

Christian is an adventurous kid, and wants to be a cave explorer when he grows up. He has no problem with snakes, bugs, and other "small, creepy things". Right now, though, given his uncaring father and the lack of opportunities open to him, he's stuck bug collecting, although he isn't distraught about it.

The Day brothers came home with D report cards today... well, except Taylor. Christian tried not to let it get to him at first, but by the time evening rolled around, he was feeling quite depressed.[1] 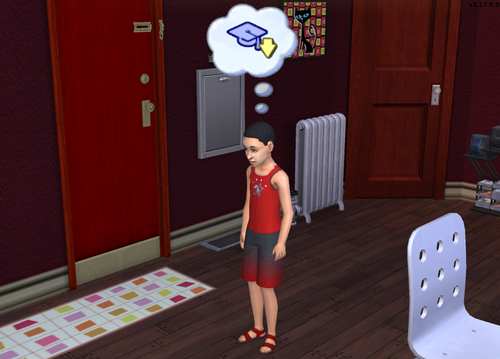 Retrieved from "https://www.thesimswiki.com/w/index.php?title=Fanon:Christian_Day&oldid=240873"
Categories:
Hidden category:
Cookies help us deliver our services. By using our services, you agree to our use of cookies.