The Firebaum family is a family in SimVille. It consists of Cory Firebaum and his two teenaged children: Carly and Darren.

Cory is described as a lazy and apathetic father who has little interest in work. His two children, however, do not share the same ideology and are willing to work for success, although their definition of success differ from each other. With no real role model to base themselves off of, Carly and Darren are off to quite a shaky start in their transition to adulthood.

The following was posted to ModTheSims on May 22, 2017. The original post can be found here.

If you remember the post about the Days, you will recall that Cody Day is a father, but at the same time he's too busy wrapped up in his own pursuit for pleasure to actually be one.

For the Firebaums, the situation is similar... but a lot less extreme. 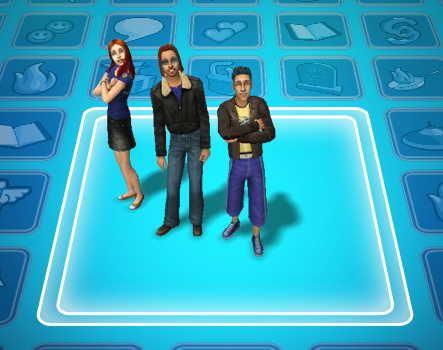 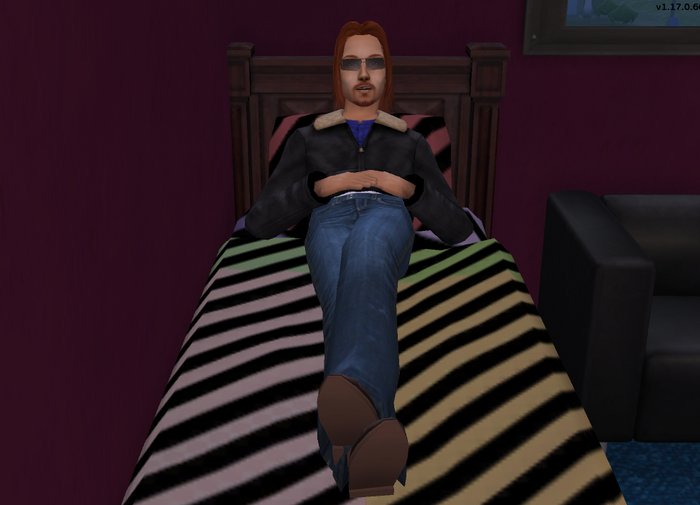 Cory wants to invent a movable bed that will let him taxi around town under his covers, but he's too lazy to do that.

Cory Firebaum (whose name is coincidentally very similar to Cody's), father of two kids and (formerly) married to an unknown woman, has settled into SimVille, looking for cozy comfort. While Cody is more focused on WooHoo, Cory just wants to veg out on the couch with a bag of chips. Dates are nice... kinda, but to Cory, it takes even a small level of commitment that Cory doesn't want. 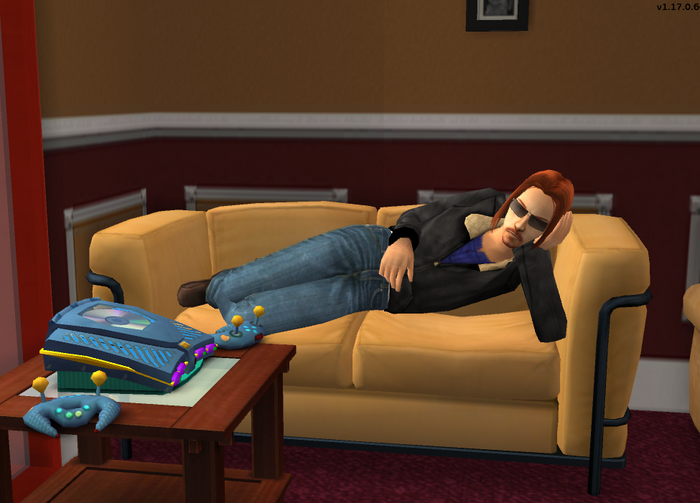 Cory has only one active point, making him one of the laziest Sims in SimVille. Dan Newbie would probably want to invite him to a gym, but Cory will only accept dinner invitations... and party ones too. Cory's laziness extends into his career, where he works as a Button Masher in the Gamer career. He's not actually that interested in money, only into making enough to buy food and to keep the repo-man at bay. The only skill he wants to build up is his gaming skill... but he's too lazy to do that! He's not one to stray very far from "Easy Mode".

While Cory is disinterested in work, he has 7 neat points and 8 playful points, making him a Capricorn. He's not a slob, unlike the Newbies, so at least he keeps his home clean and tidy. Cory also doesn't mind company, and unlike Cody, he's willing to spend time with his kids and their friends. 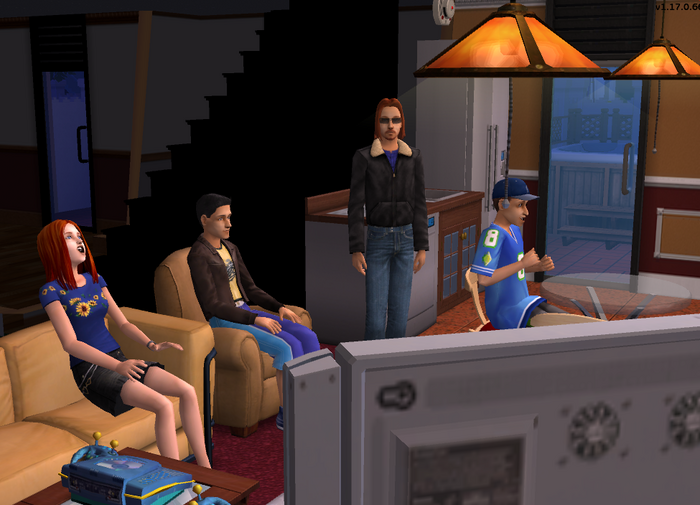 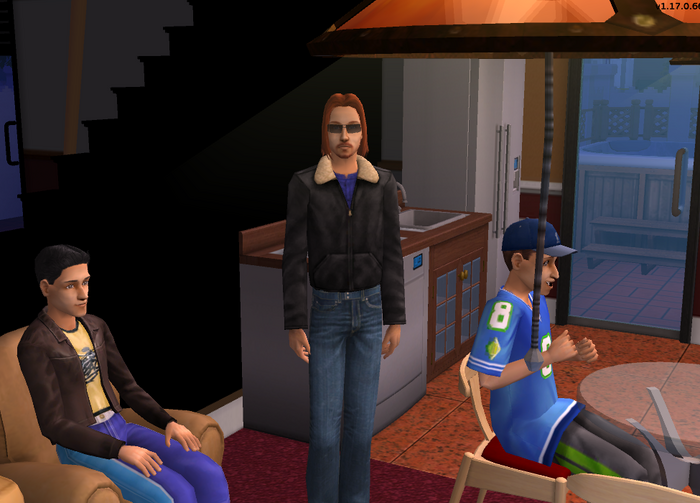 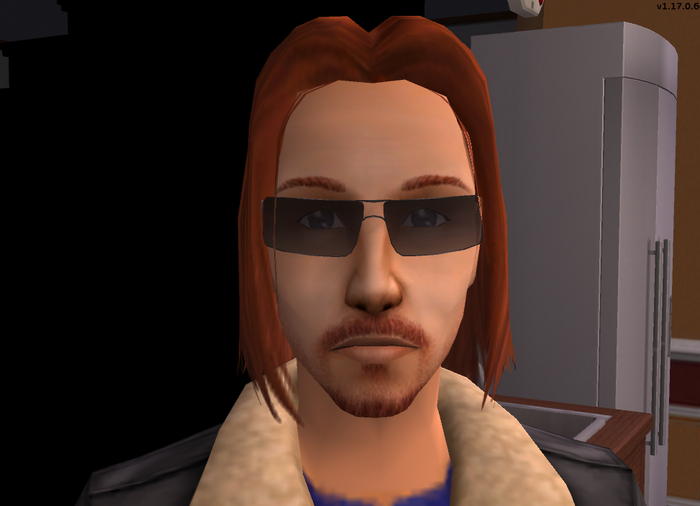 Guessing he just wasn't happy there wasn't a seat for him

Cory's eight playful points also enables him to play in the bathtub... you know, I think I have more fun watching him pretend he's a pirate than he does! 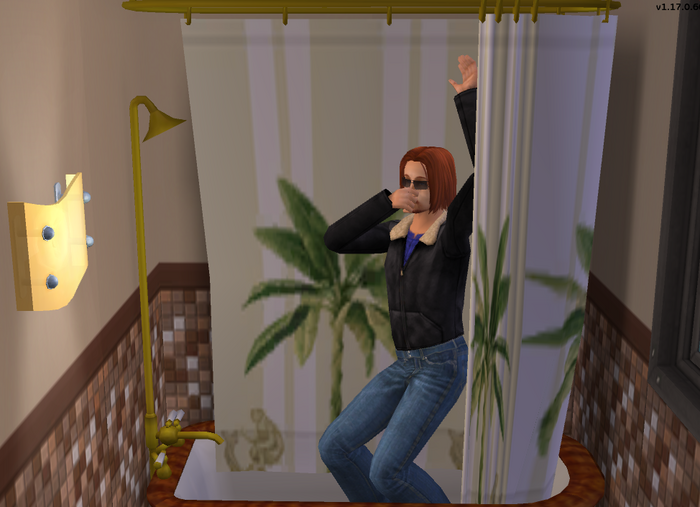 While Cody might have a long history with being a romancer, that's only because he's old. SimVille's home to only three romance aspiration Sims (excluding townies), and only two of them have it as their primary aspiration. Carly is one of the two. 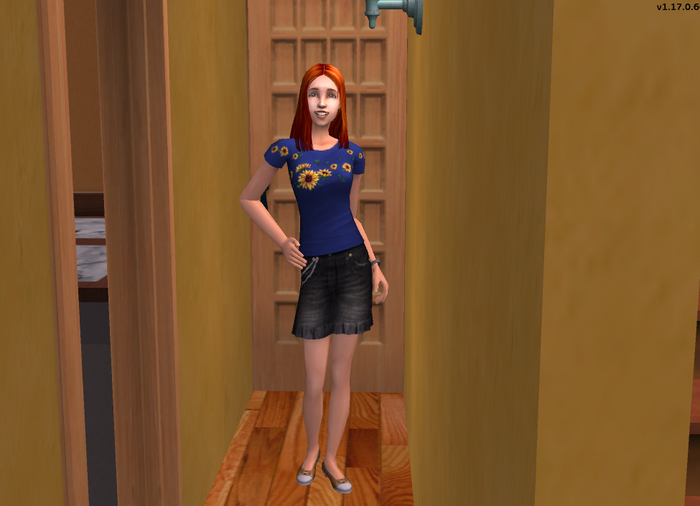 Carly believes in polygamy and likes having fun while doing so, but unlike her father she's willing to work for it.

Carly's personality is similar to Don Lothario's. She has 1 neat point, 8 outgoing points, 5 active and playful points, and an impressive 7 nice points. Carly's heard the rumours that "nice girls finish last", but she doesn't believe in that. 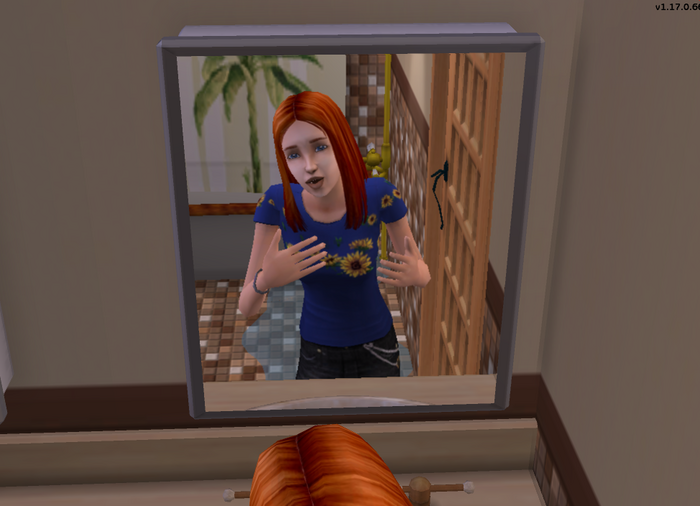 Carly currently has two loves—Julio Cuevas and Toby Jocks—and she's hankering for more. It appears that Toby is her favourite (for now, at least), since she had her first kiss with him. As a plus, the two aren't aware that she's dating both of them at the same time! And what's even more interesting is that Toby is the other Sim who has romance as their primary aspiration! Things are going to get interesting if Carly doesn't keep a low profile.

Unlike Cody and Cory, Carly's willing to work for success, and she currently has an A+ in school. She does work in the Slacker as a golf caddie, but hey, carrying golf clubs around surely requires more effort than just mashing buttons like potatoes, right? 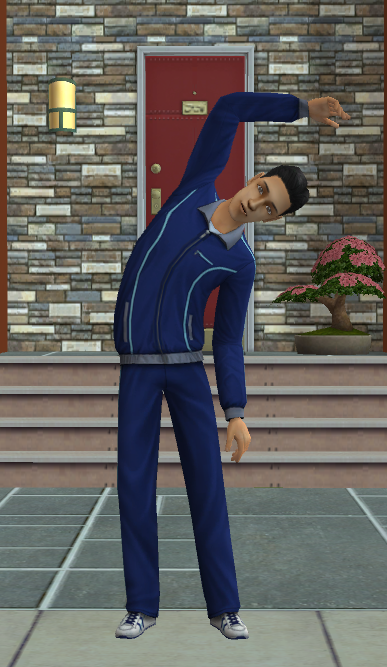 Darren wants to own a guitar, but his apartment's way too small for that. The next best thing for him is to freestyle in front of the mirror.

Yes, Darren is the second-born child, so he does get some points from me for that. Like his sister, Darren's extremely outgoing, but his social nature is focused on making friends rather than loves. Other than that, his personality is similar to Carly's, varying only by a few points in each area. 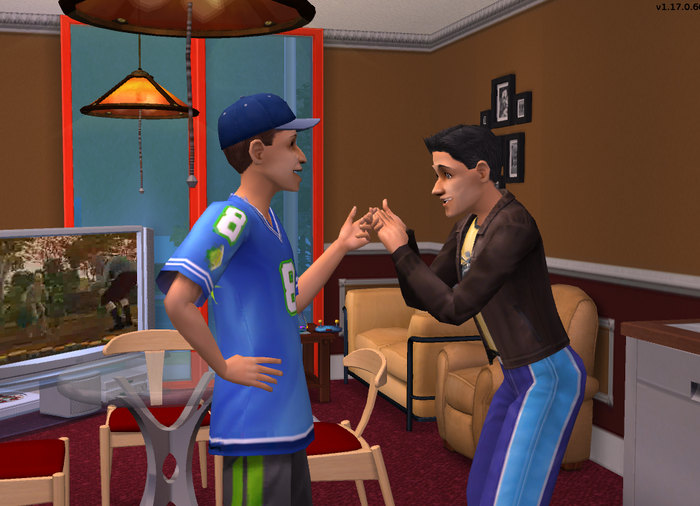 Darren wants to be a musician like the Newbies, but there isn't enough room in his small apartment for a musical instrument. He has, however, shown some interest in holding up the bathroom freestyling in front of the mirror... 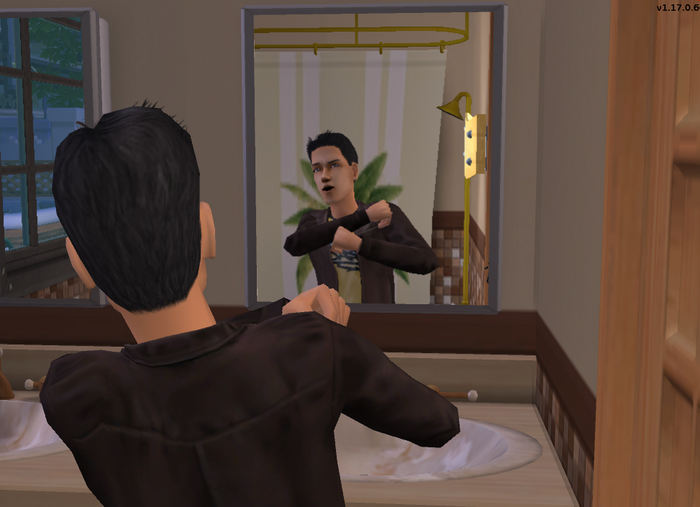 Oh wait, there's a mirror in your bedroom, nevermind. Now you can keep your sister awake instead! 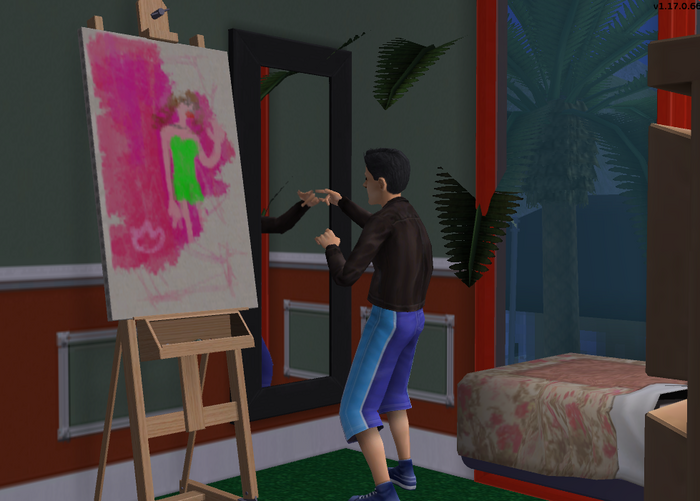 The Firebaums live in an apartment lot I downloaded from MTS. The lot has one of the smallest apartment units in the hood, but by no means uncomfortable. 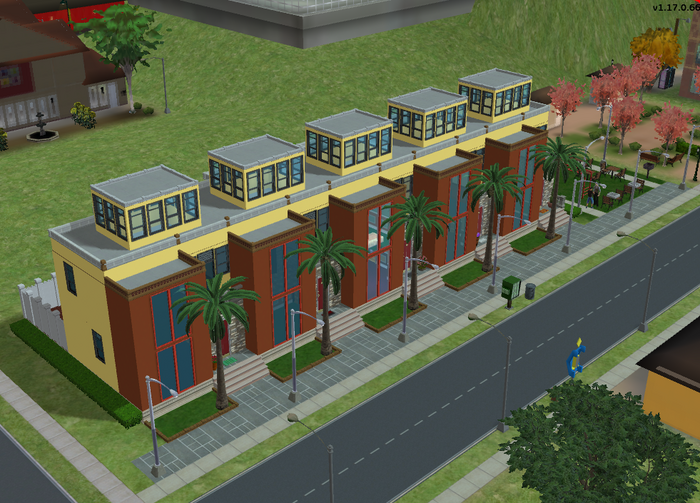 The Firebaums have the apartment smack in the middle of the building. Two doors to the left, two doors to the right. Their front steps are steps from the public sidewalk. The first floor is where the kitchen, living room, and bathroom are located. The apartment also offers a nice private patio in the back, complete with a hot tub. Perfect for someone like Cory. 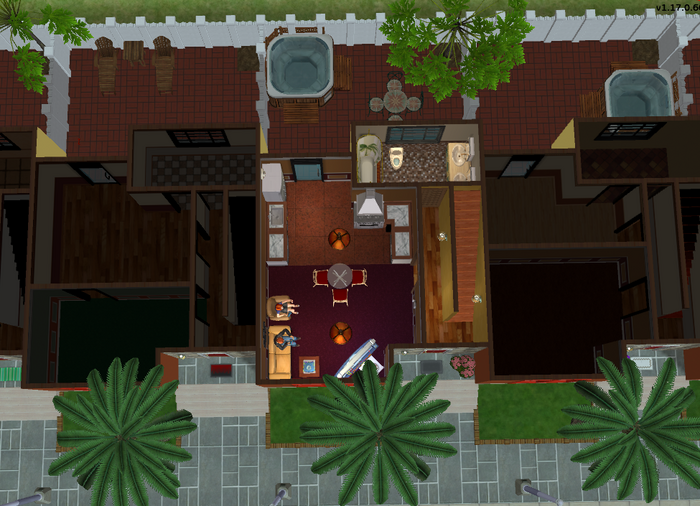 The second floor has their two bedrooms and their computer desk. There's also a balcony, but it's too small to be reasonably functional. 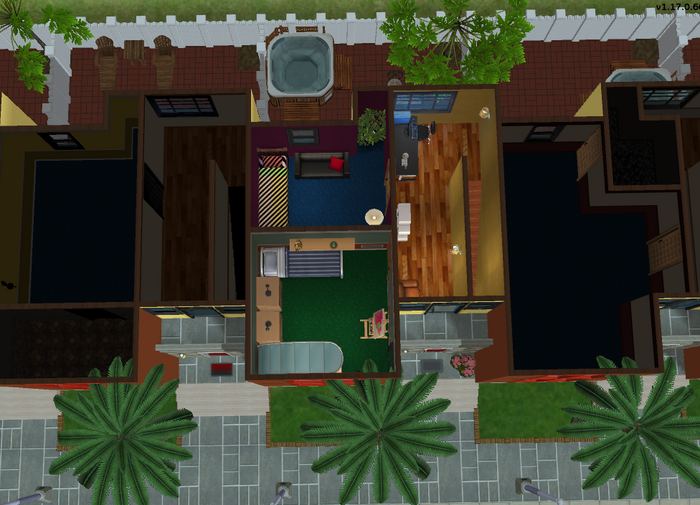 The communal area of the apartment has a few chess tables, a monkey bars set, a grill, and a swimming pool. 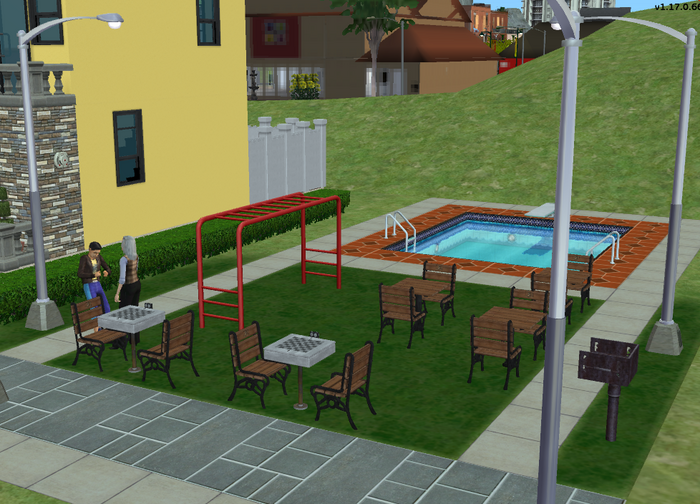 A brief glimpse of life in the Firebaum family

Cory's always the last one to wake up in this house. Carly and Darren are up long before he is. 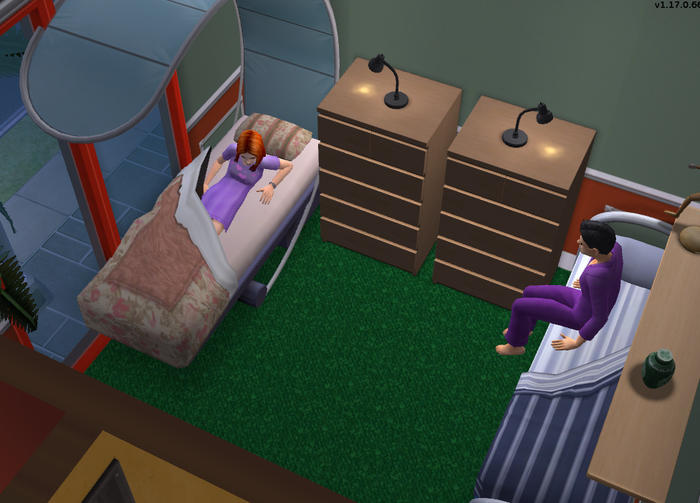 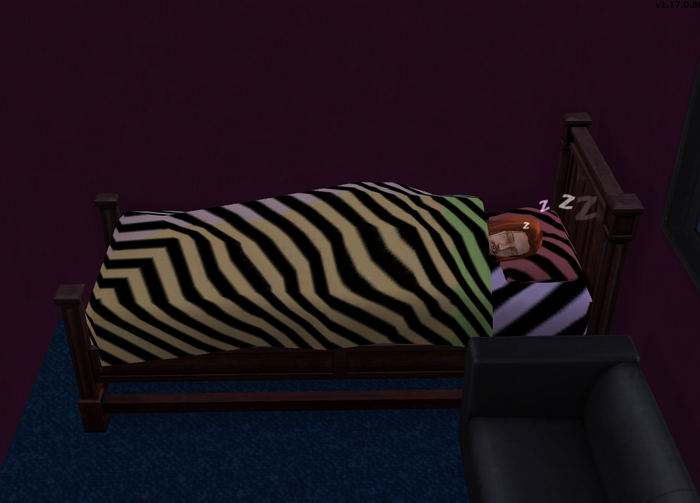 Cory has the most cooking skill points, however, so his kids usually wait for him to make his famous breakfast omelettes! 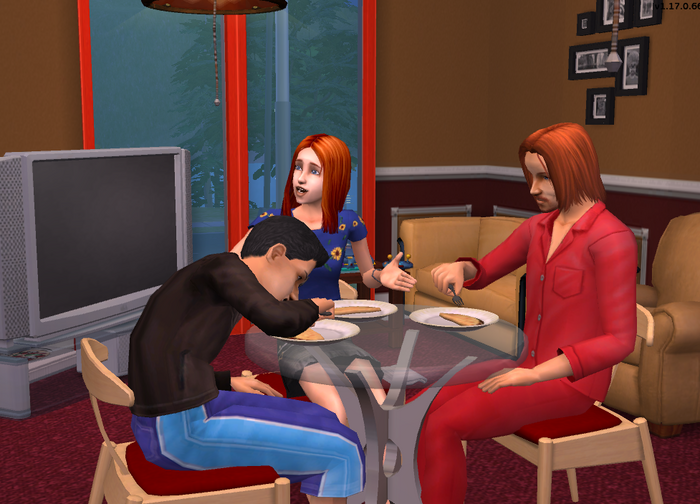 Unlike the Days, Carly and Darren wake up bright-eyed and bushy-tailed, so they're attentive, alert, and engaged in class. Cory has to "work" today... if playing video games constitutes work. 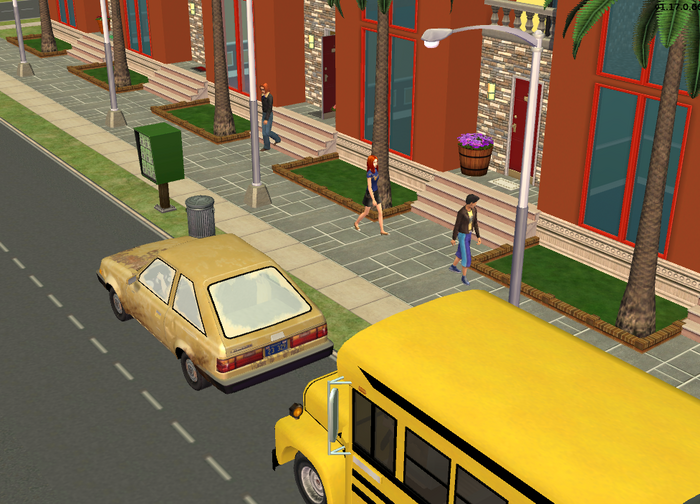 Cory works until 4, so Carly and Darren, being teens, get home before he does. Both of them have jobs, so they don't stick around for long. Carly works as a Golf Caddy while Darren works as a Record Store Clerk, and their hours are the same: 3pm to 6pm. That means Cory has two hours to himself once he's home from "work". 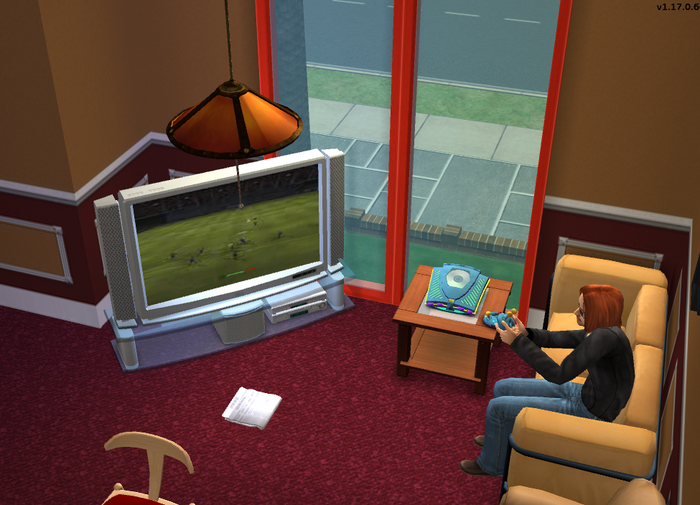 When Carly and Darren get home, Cory prepares some mac and cheese, not just because it's easy to make, but because it truly is the best comfort food in the world. At least for Cory. 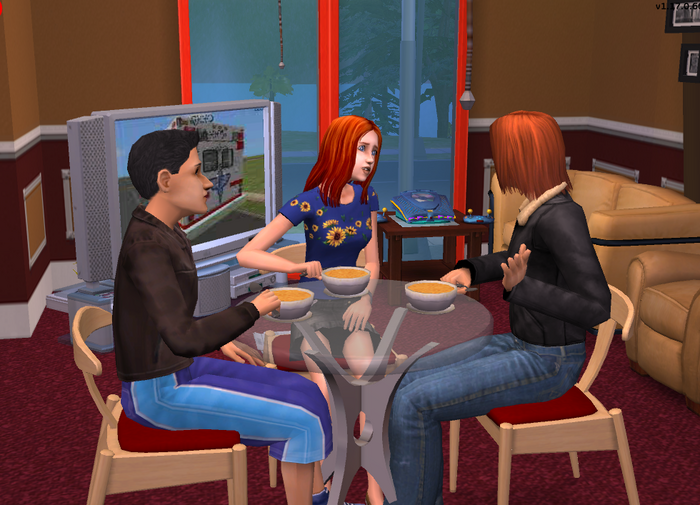 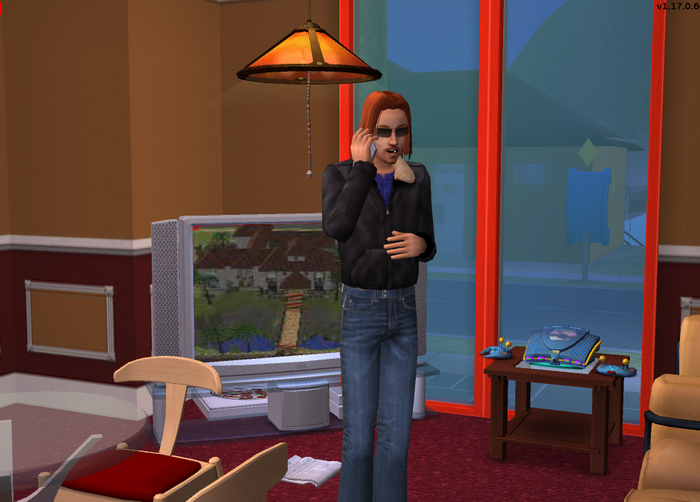 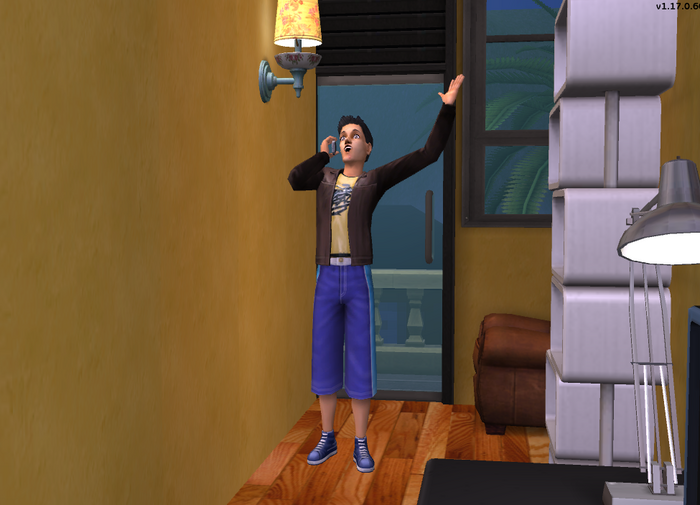 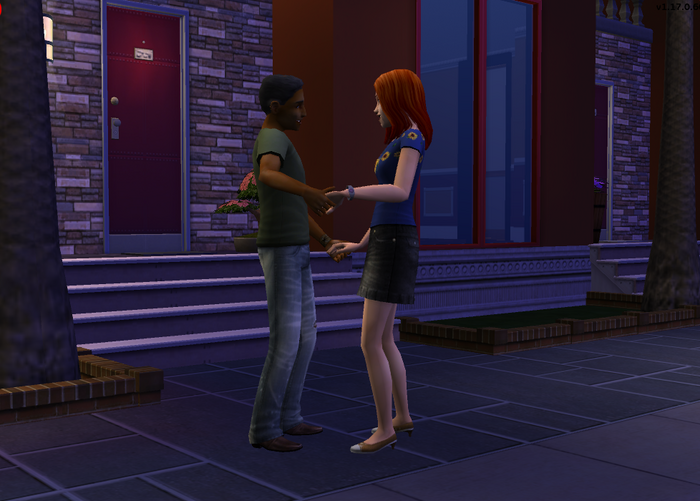 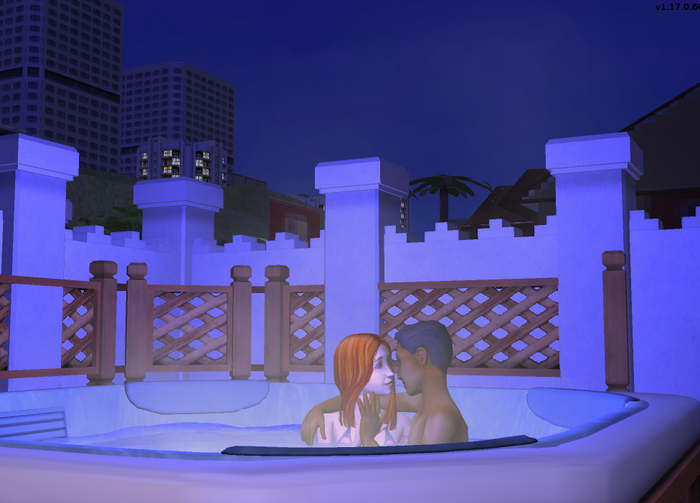 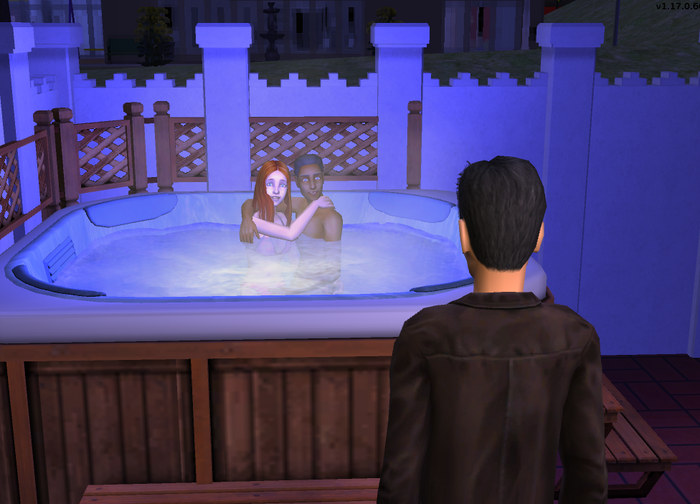 Why the scowl, Darren? 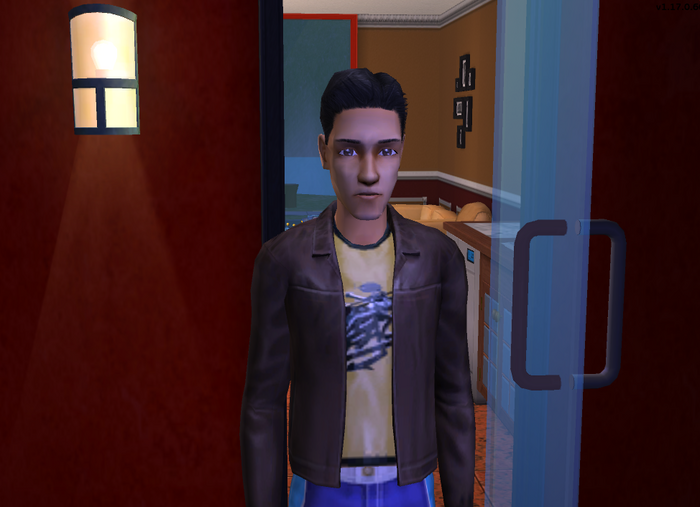 The Firebaums are one of my oldest families, although I haven't actually played them that much in SimVille. Cory's definitely better than Cody, and his kids aren't doing too bad. But every parent is a role model, whether or not they like it, and Cory and Cody aren't playing that role very well. Will Cory ever realize just how unexciting his hedonistic lifestyle is compared to what's out there? I mean, eventually you have to get bored of munching on chips in front of the TV.

The following images were cut from the final version of the forum post.[n 1]

Retrieved from "https://www.thesimswiki.com/w/index.php?title=Fanon:Firebaum_family&oldid=241299"
Categories:
Hidden category:
Cookies help us deliver our services. By using our services, you agree to our use of cookies.