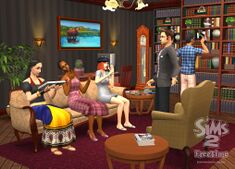 Book club members having a gathering.

Film and literature is one of the hobbies in The Sims 2: FreeTime. Its secret lot is Desirable Discourse. It is the only hobby that is not associated with any skill, although there are some implications that it is linked with the charisma skill. Having a lazy or shy personality will raise the enthusiasm for this hobby faster. It seems to be very rare for a Sim to have film and literature as a predestined hobby, due to its assignment being based on having few points in two personality aspects.

The television and the bookshelf are honored places for those Sims that thrive on stories. The film and literature Sim revels in the comedy and the mystery present in all intricate narratives.

Activities that raise a Sim's enthusiasm in film and literature are:

Available to toddlers and children:

Available to children and up:

Available to teens and up:

Available to adults and up:

Gaining enthusiasm in this hobby can unlock these interactions:

When reading a book that builds enthusiasm in this hobby, Sims who are "in the zone" will hear sounds related to the book's genre.

Sims with enthusiasm in this hobby tend to read a book while walking.

Befriending a film and literature hobby instructor will decrease the friends requirements by one for Sims who work in the Entertainment, Journalism, or Show Business careers.

Retrieved from "https://www.thesimswiki.com/w/index.php?title=Film_and_Literature&oldid=334700"
Categories:
Cookies help us deliver our services. By using our services, you agree to our use of cookies.