From The Sims Wiki, a collaborative database for The Sims series
(Redirected from Fire department)
Jump to navigation Jump to search 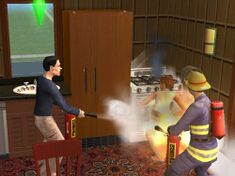 A Sim and a firefighter extinguishing a fire in The Sims 2.

For the firefighting profession in The Sims 3: Ambitions, see Firefighter.

The firefighter is an NPC who extinguishes house fires. They will be automatically called to a scene if a fire alarm goes off. If there is no alarm in the room where the fire is, it is best to phone them up quickly.

In The Sims, the firefighter is a male named Freddy, who is dressed in a yellow firefighter suit and carries a large fire extinguisher on his back. When summoned, he will take a few Sim minutes to arrive. If called when there is a fire on the lot, he will rush over to the fire and attempt to extinguish it, and will be able to extinguish it even if the fire is inaccessible. If called when there is no fire, he will fine the player's Sim §100.

When extinguishing fires, he will make no attempt to prioritize Sims or pets on fire, instead extinguishing the flames closest to him.

Like other NPCs in The Sims, he will arrive and leave the lot on foot. He cannot be interacted with in any way.

In The Sims 2, firefighters are full-fledged Sims, and can be interacted with by Sims. Sims can talk to them after they are done with their jobs, and relationships can be made with the firefighters. Firefighters can be married or moved in if the relationship is high enough.

Firefighters will come in a fire engine almost immediately after they have been summoned. If there is a fire, a firefighter will emerge from the engine and rush to the fire, and if the fire is very large, a second firefighter will come out. If they are called when there is no fire, there is a §500 fine, and the caller will get a negative memory of being fined, plus the negative memory of having a fire. Firefighter outfits are available through Debug Mode in Create a Sim.

Firefighters use the same fire extinguisher as Sims do, unlike The Sims, although they will use it more efficiently. Firefighters will prioritize saving Sims who are on fire over other objects. Firefighters are unable to extinguish fires that are inaccessible, and players will receive a notification about this.

Once the fire has been extinguished, firefighters will stick around for a short time, allowing Sims to converse with them. Before leaving, they will advise the Sims to "be more careful next time."

If Seasons is installed, lightning during a thunderstorm may strike an object and cause a fire, which will often be extinguished shortly by the rain. If a Sim calls the fire department, the fire will usually be out by the time they arrive, and the household will be fined as a result.

If Ambitions is installed, Sims are able to be in the Firefighter profession, allowing them to work at the fire station and respond to house fires or building disasters. Sims not in the profession can regularly visit the fire department, but will not have access to the fire engine or fire alarms.

If Seasons is installed, frozen Sims can be revived by firefighters that have been summoned by the fire alarm or over the phone.[1]

The Sims 3 and Expansions[edit | edit source]

Firefighters were added into The Sims 4 with patch 95. Two firefighters will automatically be called if a smoke detector goes off, but Sims can also call them on the phone. However, if there is no fire, they will berate the household and charge them a fine. Firefighters will usually cheer after extinguishing all fires on a lot, but they may sometimes do a dance as well.

Firefighters will show up in every residential world except Sulani, where a household's neighbors will help put out fires instead.

Retrieved from "https://www.thesimswiki.com/w/index.php?title=Firefighter_(NPC)&oldid=938901"
Categories:
Cookies help us deliver our services. By using our services, you agree to our use of cookies.