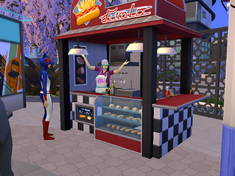 A food stand at a festival in San Myshuno.

Food stands, or food stalls, are community lot objects that allow Sims to purchase food or drinks. Unlike food-selling vehicles, these objects stand still in one place and have one Sim as a vendor. Bars and espresso bars are similar to food stands, except they are intended to be placed inside a venue such as a bar or café.

Some food stands appear for special occasions only.

Food stands were first introduced in The Sims: Hot Date, and more were added in every subsequent expansion after. They give Sims an opportunity to replenish hunger while they are on community lots, but differ from restaurants in that Sims do not need to be formally seated.

Sims can purchase food or drinks from these stands, and can choose from up to three different types of foods, depending on the vendor. Some food stands, however, only sell one type of food. The Sim will watch as the vendor prepares the food before handing it to them, after which they will either find a place to sit and enjoy their food, or consume it standing up.

Three new food stands were introduced The Sims 2: Bon Voyage—one for each vacation destination—along with an additional fast food stand from The Sims 2: Apartment Life. They consist of a small kitchen staffed by an NPC chef, with a bar and four stools at the front. Sims can seat themselves on one of the stools and order a plate for themselves, after which the chef will prepare and serve the meal directly to the Sim, who will eat it at the stand. The chef will also clear off finished plates from the bar. Sims cannot remove plates from the stand and eat it elsewhere, although it is possible for Sims to eat abandoned food left on the stand. If the food stand is located in a vacation destination, Sims can ask the chef for travel tips.

The stools on the food stands are technically separate objects, but will follow the stand when it is moved in buy mode. If the Bon Voyage patch is installed, the stools can be removed from the stand separately.

Although they can be placed in owned businesses and can have their prices changed, Sims cannot assign employees to staff them; instead, they will spawn their usual NPC chefs. Since chefs do not need to be paid, food stands can be used to sell food for free.[confirmation needed]

All food stands have a hunger and environment rating of 10.

This food stand is found on Twikkii Island by default. Sims can purchase Pineapple Surprise, Luau Ribs, and Teriyaki Mahi-Mahi, each of which cost §25.

This food stand is found on Three Lakes by default. Sims can purchase Chicken Pot Pie, Char-broiled Catfish, and Flapjacks, each of which cost §25.

This food stand is found on Takemizu Village by default. Sims can purchase Ramen, Steamed Rice Bowls, and Chirashi, each of which cost §25.

Sims can purchase hot dogs, hamburgers, and gyros, each of which cost §25.

Food stands return in The Sims 3: Seasons, where they are called "concession stands". There is a stand for each season, and they can typically be found at a world's festival grounds. However, they can be placed on any community lot. Each concession stand has its own menu, and they also sell some food from previous packs' food trucks and ice cream trucks. However, the latter requires Late Night and Pets to be installed, respectively.

Island Paradise includes two new food stands that can only be placed at resorts. Unowned resorts automatically assign vendors to work at these stands, but they must be hired at player-owned resorts. There are three food quality options for owned resorts: low (§15/day), medium (§25/day) and high (§50/day).

The Sims 3 Store offers two stands in the Humble Harvest Stands set. One that sells fruit, vegetables and skill books, and another that children can use to sell lemonade and other juices.

Food stalls are reintroduced in The Sims 4: City Living. Each stall sells its own unique menu of food. Sims learn to cook the type of food from the food stall after they eat it. Food stalls located in the neighborhood space will spawn a vendor automatically. For food stalls placed on a lot, Sims can hire a vendor for §100. There is also a stall that sells fresh produce and spices, but it is normally hidden from the catalog and can only be bought if the bb.showhiddenobjects cheat is entered.

Several packs add more food stalls to the game, including Cottage Living, Cats & Dogs, Jungle Adventure, Seasons, Island Living, Discover University, Eco Lifestyle and Snowy Escape. Each pack's stalls typically spawn in their associated world, except for the Seasons stalls, which can spawn in almost any world depending on the season, and the Eco Lifestyle stall, which does not naturally spawn in any world. Some worlds, such as San Myshuno, Sulani, and Britechester, have the food stalls that are present differ based on a specific time, while other worlds, such as Brindleton Bay, Selvadorada, and Mt. Komorebi, never have their food stalls change. The coffee carts from Discover University allow Sims to buy food and drinks "for here" or "to go", similar to espresso bars in Get Together.

The food stalls in City Living change automatically at 2:00 AM in San Myshuno. The following rotation applies:

During festivals in San Myshuno, the following stalls will instead be present:

The stands in Island Living can be found on two of Sulani's islands:

However, during the fishing tournament held in Ohan'ali Town on Saturdays, a special food stand will be present, the "Ready Set Go Fish Shack". It is hidden from the catalog and cannot be bought without cheats.

The coffee carts in Discover University can typically be found in each university's neighborhood in Britechester. During organization gatherings at the University of Britechester, the following stalls will instead be present:

Likewise, during organization gatherings at Foxbury Institute, the following stalls will be present:

The food stalls in Snowy Escape are located in each neighborhood of Mt. Komorebi at all times:

In addition to those stalls, during festivals in Mt. Komorebi the following stalls will be present:

Retrieved from "https://www.thesimswiki.com/w/index.php?title=Food_stand&oldid=965970"
Categories:
Hidden category:
Cookies help us deliver our services. By using our services, you agree to our use of cookies.