The Fyres family is a pre-made family residing in Windenburg, the world introduced in The Sims 4: Get Together. It consists of Moira and Dominic Fyres, and their two daughters Siobhan and Morgan. They live in the Dresden House lot and start off with 20,000 Simoleons.

According to the family bio, Dominic's and Moira's relationship is blooming, but their daughters are having a sibling rivalry with each other. Morgan is supposedly a rebellious teenager, while Siobhan wants to build a club full of popular friends of her. Even though there is a supposed rivalry going on, the sisters don't actually have any negative relationships with each other in-game.

Their names and surname are Irish, which could suggest that they have Irish ancestry. 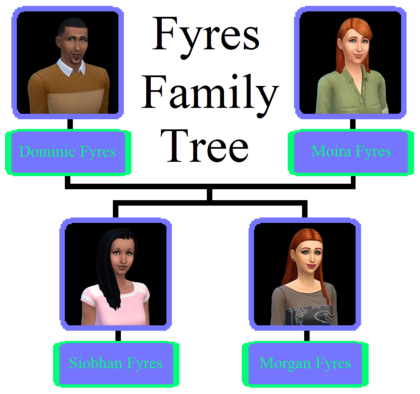 Retrieved from "https://www.thesimswiki.com/w/index.php?title=Fyres_family&oldid=927163"
Categories:
Cookies help us deliver our services. By using our services, you agree to our use of cookies.