This tutorial is for The Sims 2 only.

When you first create a custom neighborhood, it will automatically be given the name "N004", with "004" being the next available number, after Veronaville, which has a folder ID of N003. If you create another hood, it'll be N005, and then N006, and so on. If you want to share your neighborhood with other players, however, it becomes a problem if the other player already created their own custom neighborhoods, and thus already have a hood with the folder ID of N004.

The simplest solution would be to rename the folder; however, almost all files in a neighborhood folder are prefixed with the folder ID! So, if you wanted to change a folder ID from N004 to C404, you'd have to rename every single file in the folder!

This tutorial will show you how to use a program to simplify and speed up the task, so you can share your neighborhood with other players, and if you received someone else's neighborhood, how you can change its name in case you have an existing neighborhood with the same ID.

You will need[edit | edit source]

There are two ways to do this.

If you have SimPE installed, you can use that to find your neighborhood folder. Start up SimPE and wait for it to load. Once it's ready, click on "Tools", "Neighborhood", and then "Neighborhood Browser" (or just press ^ Ctrl + ⇧ Shift + N) 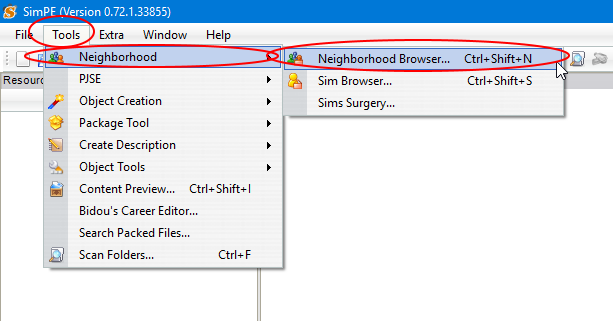 Find your neighborhood and open it. 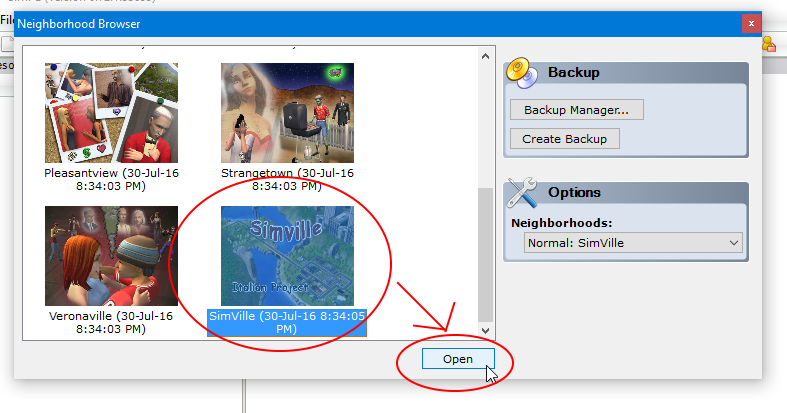 Once SimPE is done loading the neighborhood (may take a while), look at the title bar at the top. The location of the neighborhood's folder will be shown. Make note of it, and then close SimPE.

If you do not have SimPE, or if you can't be bothered to open it, open Windows Explorer and navigate to the My Documents -> EA Games -> The Sims 2 -> Neighborhoods folder. Then, find your neighborhood's folder. All neighborhoods are shown in the in-game main menu in the order that their folders are named. If you have all expansion packs installed, the default folder names for the pre-made neighborhoods are "E001" (Belladonna Cove), "F001" (Desiderata Valley), "G001" (Riverblossom Hills), "N001" (Pleasantview), "N002" (Strangetown), and "N003" (Veronaville). If you had a neighborhood with the folder ID "A001", it will appear before Belladonna Cove. If you have a neighborhood with the folder ID "F002", it will appear after Desiderata Valley, but before Riverblossom Hills. As such, all custom neighborhoods, by default, will always appear after Veronaville. 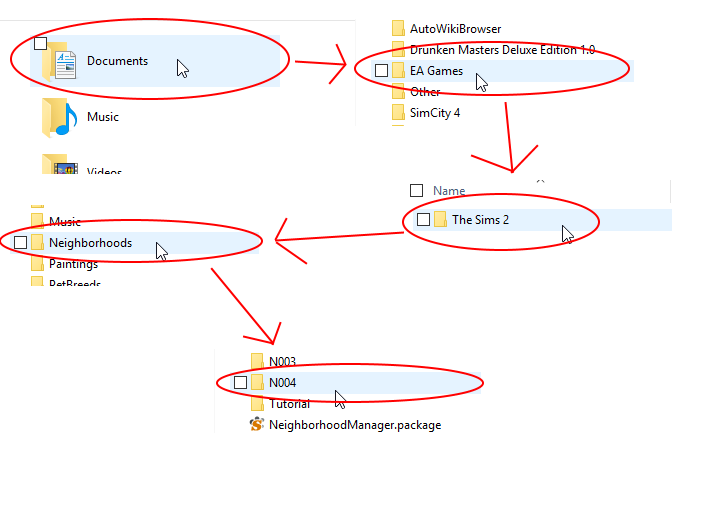 Open up the Bulk Rename Utility and then navigate to your neighborhood's folder.

Let's say we wanted to change our folder ID to "C404". Start by clicking on the folder you want to rename in question, and then, in the "Replace" field, enter the appropriate parameters. Specifically, we want to replace "N004", the current folder ID, with "C404", our desired folder ID.

The program will, in the "New Name" column, show you what the name of the folder will look like after your desired changes are applied. Now click on the big "Rename" button at the bottom-right. 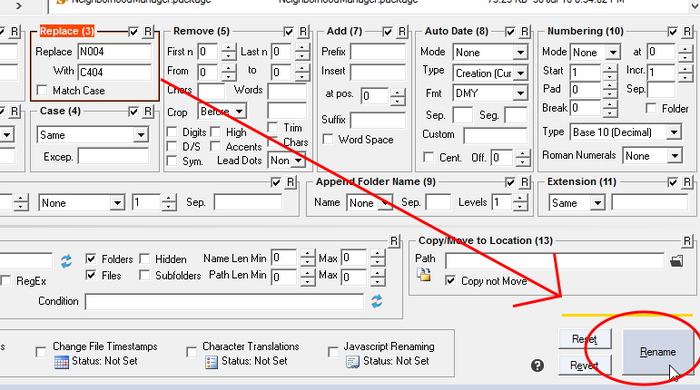 Once you've clicked past all of its dialog boxes, it will rename your folder to "C404".

Bingo! However, you're not done yet. Remember that all the files in that folder still have the old prefix "N004", and the neighborhood may not work correctly if that prefix isn't properly changed.

Now, go into the neighborhood folder itself. Select all of the contents inside (or press ^ Ctrl + A; you may need to click on a file in order to bring focus to that panel). Provided you haven't touched any of the rename options, the Bulk Rename Utility should show you the new file names in the "New Name" column. It will change the "N004" prefix to "C404" without affecting the rest of the filename. Files and folders that don't have the "N004" prefix to begin with will be ignored.

Now, click "Rename". This is important; if you don't click Rename, your changes will not be applied!

After that, go into your "Characters" folder and repeat...

...and then your "Thumbnails" folder (you can skip the Storytelling folder), and repeat...

If you're uploading your neighborhood to Mod The Sims, you should be aware that the site enforces a "Neighborhood Numbers Repository" in order to prevent conflict. The repository page is located here. If you plan on uploading a neighborhood to the website, please pick an ID that isn't listed on the page and change your neighborhood's ID accordingly. A moderator will add your folder ID to said page once your upload is approved.