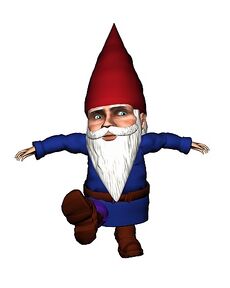 An enchanted gnome from The Sims: Makin' Magic.

Not to be confused with Gardening Gnome or Mysterious Mr. Gnome.

Garden gnomes exist in The Sims: Livin' Large, The Sims 2, The Sims 3 and The Sims 4.

In The Sims: Livin' Large, gnomes can be crafted at the KraftMatic Woodworking Table. One of the spells in The Sims: Makin' Magic can temporarily bring a garden gnome to life as a gardening gnome, which will take care of plants.

Gnomes can be purchased as lawn decorations in The Sims 2.

In Nightlife, a guest may attempt to steal a gnome from the lawn, though not when the game camera is focused on them. If the gnome is stolen successfully, any Sim in the household can retrieve it, and it will appear in his/her inventory. Sims in the household where the gnome is being stolen from will yell at the thief if they witness the theft, although they do not appear to be able to stop it.

In The Sims 2 Castaway and The Sims 2: Pets, there is a gnome called "Shifty Sam the garden gnome". In reference to his name, Shifty Sam will appear in different places on the lot when kicked over and left alone long enough, similar to the Mysterious Gnomes of The Sims 3.

In The Sims 3: Pets, there are garden gnomes in buy mode which can summon animals to a lot. There is a gnome for cats, dogs, and wild animals. 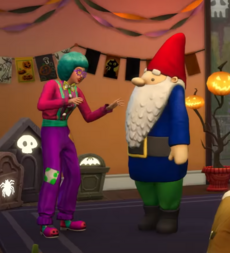 A sim dressed as a gnome for a Holiday in an official trailer for The Sims 4: Seasons.

In The Sims 4: Seasons, the Harvestfest holiday includes an activity called "Holiday Gnomes". During this activity, gnomes will appear around the lot. Sims need to praise them by giving them the right gift. If the player chooses the wrong gift, or if they kick the gnome, they will wreak havoc around the lot. If a Sim attempts to beg for an apology, there is a chance they will be struck by lightning.

When all gnomes in the lot are praised, they will start dropping Seasonal Seeds.

Retrieved from "https://www.thesimswiki.com/w/index.php?title=Garden_gnome&oldid=962632"
Categories:
Hidden categories:
Cookies help us deliver our services. By using our services, you agree to our use of cookies.