A hidden island, surrounded by fog

There are a total of 8 hidden islands around Isla Paradiso, and each of them can be unlocked in different ways. Once a hidden island is revealed, the fog will recede and the island will be owned by the Sims who discover it. The island will become the Sim's secondary home, or it can be turned into a resort. Below is the method how to unlock them. 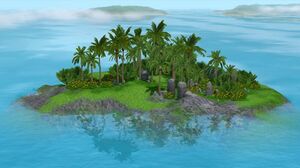 In the island itself, there's a treasure chest that contains §3,333, a large PlumbBob cut Rainbow gem, and the "Evolution of the Plumbob" painting worth §12,121.

Cay to the City[edit | edit source] 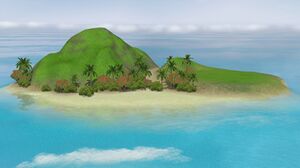 To unlock this island, Sims must rescue 35 drowning Sims in Lifeguard profession. 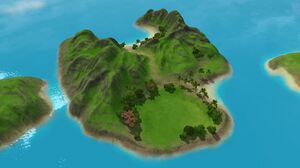 To unlock this island, Sims must reach the 5-star rating of a resort. 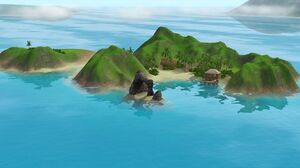 This island is unlocked by completing a series of chain opportunities. Sims can get the opportunity by checking in a resort and asking the front desk for an adventure. There's a total of 6 opportunities to be completed.

On the island, there's a small shack and a fishing spot. 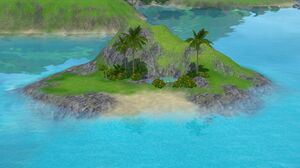 Sims only need to swim or boat to this island to unlock it. 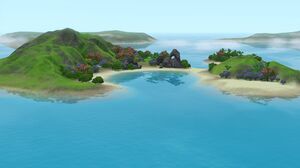 Sims need to become good friends with a mermaid. After that, meet them in a diving area, and they will show the way to the island. 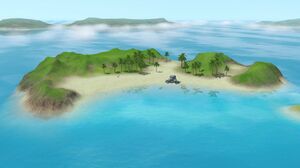 Sims require to master the Scuba Diving skill in order to unlock this island. One of the exit routes of the underwater caves will lead to the hidden island. There is a treasure chest on the shore that contains 1,200 simoleons, gold, iron, palladium, and silver. 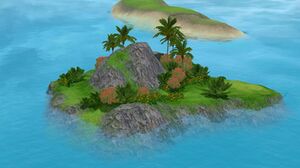 To unlock this island, Sims need to discover 4 map pieces around the town. The map pieces can be found in the treasure chests or from a message in a bottle. After Sims possess 4 of the map piece, they can reconstruct it to unlock the hidden island. Additionally, Sims can purchase the Uncharted Island Map lifetime reward to instantly unlock this island.

Retrieved from "https://www.thesimswiki.com/w/index.php?title=Hidden_island&oldid=928032"
Categories:
Cookies help us deliver our services. By using our services, you agree to our use of cookies.