A hobby lot is a secret lot in The Sims 2: FreeTime expansion that specializes in one of the hobbies. Increasing a Sim's enthusiasm in the hobby to level 5 will reward them with access to a special secret lot. In addition, most hobbies have a work-related chance card that can result in a Sim being given access to the lot, and some also have a school-related card that can result in this. An instructor, also known as an iconic hobbyist, is present on each of the secret lots. He or she is an NPC with maximum enthusiasm in the lot's designated hobby and can be asked to instruct Sims in it. Unlike Sims who have unlocked the "Instruct in Hobby" interaction for a hobby, an instructor can give hobby instruction to any Sim who asks, regardless of that Sim's level of enthusiasm.

A membership pass to the hobby lot is awarded by the instructor who owns it. The pass will show up in the Sim's memories. Townies may be created with level 5 enthusiasm in a hobby. If they are made playable, they will have access to that hobby's secret lot, but may not get a memory about receiving it. Also, children who reach level 5 enthusiasm in a hobby may gain access to that hobby's secret lot when they become teens, but do not always receive it until they pass some other benchmark that triggers a message from the hobby instructor. In the initial, unpatched release of FreeTime, the instructor would even attempt to award membership to toddlers; the instructor would walk into the house, and then leave immediately, being unable to greet the toddler.

While Sims cannot gain skill points and talent badges on normal community lots, they can gain them on hobby lots. Therefore, they make more effective gyms, libraries, studios, etc. than normal community lots. In addition to hobby-related items and activities, hobby lots will have bathrooms with toilet stalls, showers, and either dressers or changing booths (which can be used as dressers). They will also have dining areas with a grill. This enables Sims to replenish all of their motives on a hobby lot, except for Energy. Some hobby lots also contain items only normally available as career rewards.

Sims who are members of a secret hobby lot can also bring other Sims to the lot, even if those other Sims are not members. Children can be taken to a secret hobby lot if they go with an older Sim who is a member. If this is done, children who have at least 5 points of enthusiasm in the lot's hobby may appear as autonomous visitors.

A phone is available on every hobby lot to call a taxi or invite another Sim over. Hobby lots are also places where Dormies, Downtownies, and random selectable NPCs can visit outside their native areas. In the initial release of FreeTime, many types of Sims which are normally not allowed to autonomously visit community lots, such as nannies, stylists, and members of the current family, could be encountered on hobby lots. This resulted in erratic behavior. Even with the FreeTime patch, members of the current family can be encountered on hobby lots. 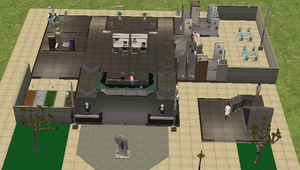 A peculiar feature of the layout is that the outdoor patio which contains the grill and dining tables can only be reached by going through the bathrooms. 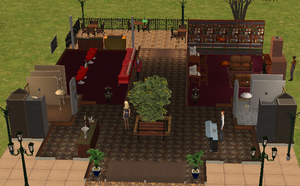 In the back of the lot, there is a small outdoor dining area with a grill, which allows Sims to serve food while on the lot. This lot is the smallest of all the hobby lots.

Note: The changing booths in the bathrooms appear to be placed in a way that does not allow Sims to use them to change clothes, though the Plan Outfit interaction can still be used. 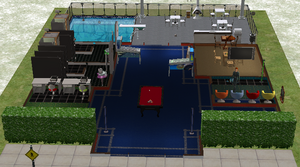 Games of Glory lets gamer Sims interact with other gamers, and gives access to pinball, pool, computers, video games, and chess for their gaming pleasure.

The patio in back of the lot has a dining area and a swimming pool. It also has a speaker which plays the Indie Wave radio station.

My Muse lets musical Sims interact with other musical Sims and gives access to a variety of instruments, as well a DJ booth for dancing or mixing. The second floor is a ballet studio.

Note: In very rare cases, non-playable Sims visiting this lot will appear on the flat portion of the roof, where they will be trapped until the lot is exited. 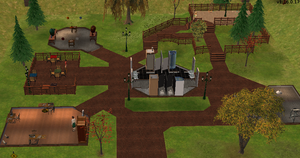 Note: The "Coloratura" corner shower in the men's restroom is placed in a way that makes it inaccessible. If told to use it, Sims will complain that the route is blocked. 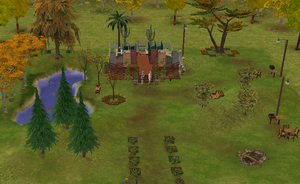 Peerless Park lets naturalistic Sims interact with other naturalistic Sims and gives access to AquaGreen Hydroponic Gardens, a Carefree Koi Pond, and a beautiful park to birdwatch and catch bugs in. There is a pond; if The Sims 2: Seasons is installed, Sims can fish in it, and will build the Fishing talent badge as they do.

There is a small ridge near the barbecue grills and outdoor dining tables. If the instructor or a visitor is initialized in just the wrong spot on that ridge, he or she can become both stuck and unreachable. 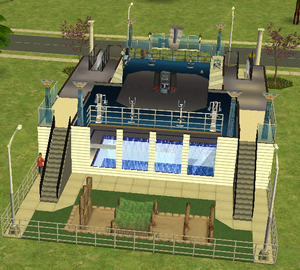 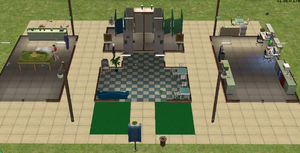 Will's Garage lets mechanical Sims interact with other mechanical Sims and gives access to computers, a variety of things to tinker with, and a train set and RC toys to play with.

Retrieved from "https://www.thesimswiki.com/w/index.php?title=Hobby_lot&oldid=954997"
Categories:
Cookies help us deliver our services. By using our services, you agree to our use of cookies.