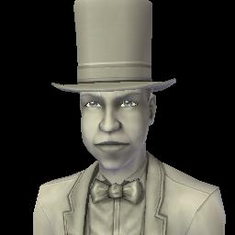 A headshot of a human statue

The human statue is an NPC who poses like a statue, featured in The Sims 2: Apartment Life and The Sims 4: City Living. They will spawn when the Poised Podium by Performance Arts is placed on a community lot[TS2:AL] and around the districts of San Myshuno.[TS4:CL] Sims can watch or give tip for §1 to the human statue for fun. Occasionally the human statue will change pose. There's a chance they will scare Sims while they're watching the human statues posing.[TS2:AL]

In The Sims 2: Apartment Life, human statues always have the same appearance, even though they're different Sims with different facial structures. They always wear a grey top hat, grey outfits, and cover their face with grey face paint. Human statues are also always elder males. Their outfit can be found in Create a Sim by turning on debugging mode.

Warning
Do NOT attempt to add Human Statues to a household, make them selectable, or tamper with them in any way or form. Doing so will corrupt the neighborhood they are in.

In The Sims 4: City Living, human statues wear golden face paint and are dressed either as a golden astronaut or as a golden cowboy. The outfits can be unlocked for playable Sims by giving a living statue tips. Wearing it allows Sims to start performing as human statues, too. NPCs will occasionally give tips that are added to the household's funds.

Retrieved from "https://www.thesimswiki.com/w/index.php?title=Human_statue&oldid=963002"
Categories:
Hidden category:
Cookies help us deliver our services. By using our services, you agree to our use of cookies.