In The Sims 2 expansion packs from University and onwards, influence is gained by making friends and fulfilling wants that gain influence points (indicated by a blue border around the want). The amount of friends a Sim has limits the amount of points he or she can accumulate at one time. A Sim can then use those points to 'influence' or command other Sims to do things for him or her. 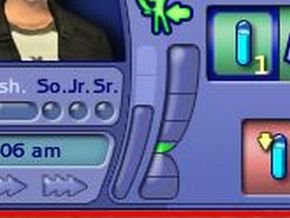 This is what the Influence bar looks like in The Sims 2.

Influencing has a powerful impact over the game, going as far as to controlling or changing a townie's life if planned correctly. For example, influence can lead to two Sims falling in love, or even fighting with each other. Once the initial interaction is completed, the two Sims may continue to move off that interaction. For example, if a Sim is influenced to insult another Sim, they may insult back. Thus, after some time, the two may continue to wage a feud against each other. A player could also do the opposite, and repair two Sims' relationship by using influence, though it may require a fair amount of influence - and patience, on the part of the player.

A majority of Sims, including service NPCs such as maids, butlers, and police, can be influenced. However, some options are limited, and sometimes it's advised not to influence a certain Sim as their own script makes them do something else. For example, trying to influence the butler to do something may result in him going to do household duties instead of what was asked, and the influencing Sim's points will not be refunded. (Also, it is advised not to influence the butler when there are things to be done, but only when there is nothing left.) Some Sims would rather do "Duty over influence", meaning that if something that would usually trigger their immediate attention happens to do so, the Sim may automatically cancel the influence if it has not taken place, and focus their attention elsewhere. If said interaction has already begun, they will finish it if possible. If influenced correctly, paper deliverers can stay on the lot long past their job time, stretching as far as 8 PM.

Players should note the influence pie menu does not take conditions into account. For example, if a Sim is influenced to cook a meal, but that Sim can't get into the house because the doors are locked, the influencing Sim will have wasted his or her influence points, and still won't have a meal. Also, if the influenced Sim needs to use something like a computer or bathroom, and more than one is available, he or she will head for the nearest one (as Sims judge "nearest"), even if it is behind a locked or opposite-gender door.

It should also be noted influence can be a tool of destruction. If a player wants to see a townie or Sim suffer, a playable Sim could influence another Sim to do it. One example is breaking up a couple to get at the desired Sim without triggering jealousy or rejection. Players can also just have Sims fight for their own amusement. Influence has many possibilities.

Influence returns in The Sims 3: University Life, and is renamed as the "convincing" system. It plays a smaller role than in The Sims 2. Sims can convince each other to cook meals, clean the house, do their homework etc.

In The Sims 4: Eco Lifestyle, influence works a bit differently to the similar systems in The Sims 2 and The Sims 3, where it affects the environment more than it affects other Sims.

Voting for a N.A.P. costs 10 influence points, as well as voting to repeal it if it is already in effect. Sims can vote as many times as they like, depending on how many points they have. Influence points can also be used to convince other Sims to support a particular N.A.P., where it costs 5 points.

Retrieved from "https://www.thesimswiki.com/w/index.php?title=Influence&oldid=939927"
Categories:
Hidden categories:
Cookies help us deliver our services. By using our services, you agree to our use of cookies.