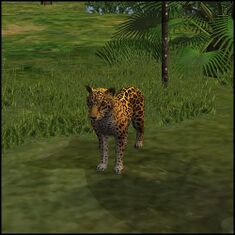 Jaguar in The Sims Castaway Stories

Jaguar is an animal that appears in The Sims Castaway Stories.

Mata is the only jaguar that appears in The Sims Castaway Stories, as she plays a part in the Shipwrecked and Single story. She appears on a location called The Crossroads, when the protagonist passes through the area, led by Winford Rhinehart, who says to "not be afraid of the wild". Later in the game's progress, Amanaki Tama, the village shaman, has Mata guard the way to The Forbidden Village, where the player is supposed to go to retrieve Fangaloka Manave's sacred drums. By taming Mata with a Nepeta leaf found at the Creepy Hollow, the protagonist may follow the path she guarded.

Mata will not appear again during or after the story. The purpose of jaguars seem to be limited to Mata's purpose in the story. However there are indications that jaguars were planned to have more purpose, as various descriptions in the game mention them. More interestingly, Felicity Island has eight jaguars hidden in its game files. These jaguars are treated as cats and have pet personalities. This seems to indicate that initially jaguars were intended to be the equivalent of stray cats (like hyenas are the equivalent of stray dogs), but that the idea had been dropped and left unfinished.

Although the player can't see the jaguar they can download a mod that allows players to summon jaguars, although they have few interactions, as if their character file is unfinished.

Retrieved from "https://www.thesimswiki.com/w/index.php?title=Jaguar&oldid=931055"
Categories:
Cookies help us deliver our services. By using our services, you agree to our use of cookies.