The Kahale family is a pre-made, playable family that first appeared in the downloadable neighborhood of Sunlit Tides and later Isla Paradiso. It consists of three members and an another in Isla Paradiso; Kai, Alana, Lealani as well as Alana's cousin Akoni Kahale. Kai and Alana both rule over Sunlit Tides and both hope that their daughter, Lealani, will take over their reins. However, their bio questions Lealani's career path.

The family, aside from Akoni who lives in a houseboat in Isla Paradiso, resides at 9 Paradise Circle and begin the game with §200,000 in household funds. 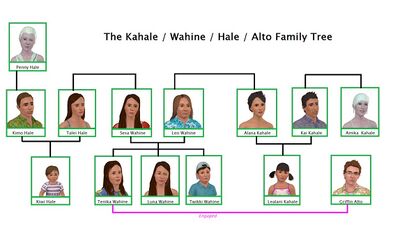 Retrieved from "https://www.thesimswiki.com/w/index.php?title=Kahale_family&oldid=708244"
Categories:
Cookies help us deliver our services. By using our services, you agree to our use of cookies.