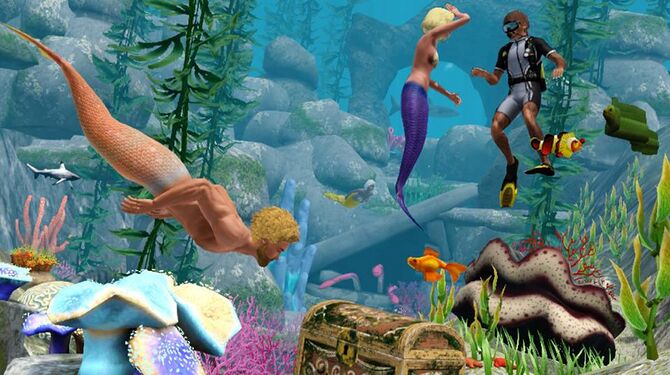 Mermaid
A life state · Featured in: 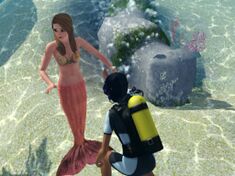 A diver talking with a mermaid in The Sims 3: Island Paradise.

Mermaids are creatures of the ocean and water, that can be encountered by diving or just taking a stroll in a boat in the sea. They are also capable of living on land.

A Sim can become a mermaid by ingesting mermadic kelp, which can be obtained either by becoming good friends with a mermaid and using the "Ask About Fish Parts" interaction while both the Sim and the mermaid are underwater, or purchasing the “Mermadic Kelp” lifetime reward for 25,000 lifetime happiness points. Note that other life states cannot become mermaids even if they eat the mermadic kelp, unless mods are used. They have to become normal Sims before they can turn into a mermaid. Mermaids cannot be created manually or shared on the exchange, since EA wanted them to be an exclusive life state. However, you can still share households with normal sims and at least one piece of “Mermadic Kelp” in a Sim’s inventory to instantly turn them into mermaids.

Mermaid is a genetic life state. There is a 50% chance a child will be a mermaid for each mermaid parent. If both parents are mermaids the child will be 100% mermaid. And because it is a life state it can't have another life state, for example, it can't become a zombified mermaid, despite being a secondary life state that can be combined with other major life state.

Note
Even if Supernatural is installed, mermaids cannot be created in Create a Sim.

While in water, Mermaids have a colorful scaly fish/dolphin tail in place of legs. Males have a tail with a straight fin like a shark, and go shirtless, while females wear a seashell bikini top and have tails that end in a classic dolphin-shaped fluke. On land, a mermaid's tail will transform into a scaly pair of legs of the same color. Mermaids have their scaly legs from childhood, but their legs won't transform into a tail while in water until the Sim is a teenager. Mermaids cannot wear socks as the scales will replace socks.

The color of a mermaid's scales and, if female, seashell bikini top can be customized by using the "Change Scale Color" interaction via mirrors.

Mermaids have the same needs as regular Sims, with two main differences:

Even if a Mermaid is well hydrated, they need to swim in the ocean at least once every 48 hours, otherwise, they'll get a "Salt Water Deficiency" moodlet. Within a day this will turn into "Adapting to Land" and when this moodlet expires, the mermaid will turn into a normal Sim. Purchasing the "Permanent Mermaid" lifetime reward will prevent the Mermaid from losing their occult status.

If a mermaid is near a fireplace or in the sun for a while they will get a moodlet causing their Hydration need to drop faster than usual until they move away and the moodlet expires. The moodlet lasts three hours.

Mermaids have various water-related special abilities. They can breathe and stay underwater indefinitely, and will not get the "Depressurising" moodlet when returning to the surface. This makes the Lungs of Steel lifetime reward useless for them. Mermaids swim faster than normal Sims on the surface and underwater. Once a mermaid becomes a teenager they will automatically maximize their Scuba Diving skill. Mermaids do not need umbrellas when it rains,[TS3:S] and they will get a positive moodlet when they get soaked.

Like normal Sims, mermaids who possess a conch shell are able to summon another mermaid they have met. Mermaids with the Mean Spirited or Evil trait are able to summon sharks to attack other divers. Mermaids are safe in their aquatic environment and will not be attacked by sharks, however, they can be attacked by the cave monster. If mermaids are on a boat, they will not be attacked by the Kraken. Mermaids swim much faster than normal Sims and prefer swimming over using boats. They’ll always win in breath holding contests, unless they’re doing this with another mermaid. They’ll also have a few new water related topics to talk about.

One of the hidden islands in Isla Paradiso can be unlocked by becoming good friends with a mermaid in one of the diving areas. After befriending them, the mermaid will come up and offer to show the location of mermaid's secret island, and then the player will unlock it.

Sims can become Mermaids by eating Mermadic Kelp. Once a Sim ingests Mermadic Kelp, they will be given a "Strange Sensations" +3 Energized moodlet; then the Sim must enter the water and swim in order to complete the transition and grow a tail. If the moodlet runs out, the Sim will no longer turn into a Mermaid upon entering the water and must eat Mermadic Kelp again if they wish to become one. It can't have any other life states; for example, it can't be a vampiric mermaid.

File:TS4 CAS Mermaid Button.png
Mermadic Kelp can be obtained in a specific ways:

Unlike Island Paradise, in Island Living mermaids can be created via CAS under occult state. Mermaids are a genetic life state. There is a 50% chance a child will be a mermaid for each mermaid parent. If both parents are mermaids the child will be 100% mermaid.

Mermaids resemble regular Sims on land, however, once they enter a body of water, either the ocean, pools, or bathtubs, they will grow a tail. The color of a Mermaid's tail and other features can be customized under "Change Sim".

File:TS4 Hydration Need.png
A Mermaid's needs are different from a Sim in one way:

File:Mermaid in bathtub.png
A mermaid's tail appears while taking a bath.
Mermaids have an array of powers that are based around water. Depending on if they have a good or evil trait; Mermaids have different powers, however, if Mermaids have neither trait, they have all the powers.

If Seasons is installed, these powers are self-interactions:

Mermaids also have a few abilities which don't require hydration:

Turning into a human[edit | edit source]

Mermaids who wish to no longer sprout a tail when they go into the water can become a regular Sim by ingesting two Mermadic Kelps in a row. After eating two of them, the Mermaid will be a regular Sim. 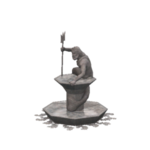 Retrieved from "https://www.thesimswiki.com/w/index.php?title=Mermaid&oldid=967001"
Categories:
Hidden categories:
Cookies help us deliver our services. By using our services, you agree to our use of cookies.