For the expansion pack of a similar name, see The Sims: House Party.

For the aspiration in The Sims 2 DS, see Party (aspiration).

A party is an event that a Sim can throw, either for fun or to commemorate a special event.

Even though Sims could throw parties in The Sims and The Sims: Livin' Large, it was only when The Sims: House Party appeared that Sims could throw huge parties, with many party-related items being included in that expansion pack. Throwing parties allows Sims to interact with neighbors they never knew they had.

It's possible to increase the size of a party by using the "Throw Party" action more than once, and it's generally up to the player to keep it within his/her computer's limits. When using the "Throw Party" option on a phone, the player has no control over who is invited. However, another feature of House Party is that any sufficiently large gathering on a residential lot is considered to be a party. Therefore, a Sim could throw a party by inviting a sufficient number of other Sims to come over.

Some of the most prominent party-related items are mentioned below:

Other special NPC characters include the entertainer, the DJ, and the caterer. 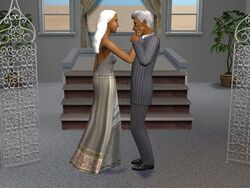 In The Sims 2, parties became timed, scored events. Once a party scenario begins, it lasts five game hours. There does not appear to be a way to end it early; sending all guests home early simply causes a large drop in the party score.

By default, parties can have two to four guests, regardless of the player's system specs. Later expansion packs allow for more guests, but a good party is generally easier to accomplish with a small number of guests. The player can decide which Sims to invite, but the likelihood that an invited guest will come depends on his or her relationship with the Sim throwing the party, regardless of his or her relationships with any other household members. Guests may leave early if they are tired, hungry, or bored, but the party score should not suffer greatly unless they all leave before the scenario has ended.

If a party hasn't ended by 11:00 PM, the police will come and break it up, ending it immediately. The final party score will be the score the party was at when the police ended it.

The types of party include:

In addition, if the party host invites many of his/her family members to the party, the Sim will get a memory of having a family reunion.

The Sims 2 for console[edit | edit source]

In The Sims 2 for console, parties can have any number of guests. The more times a Sim performs the "Throw Party" action with the phone, the more people will show up. Which guests come when the "Throw Party" action is used is random; if the player wishes to invite specific Sims, they may simply call those Sims with the phone and invite them over normally. The police will come at around 10:00 PM and warn the Sim hosting the party about the consequences of holding a party too late. If the party still hasn't been wrapped up by 11:00 PM, the police will come and fine the Sim for noise disturbance, even if there is no music playing. Also, any attempt to throw a party between 11:00 PM and 8:00 AM will fail. 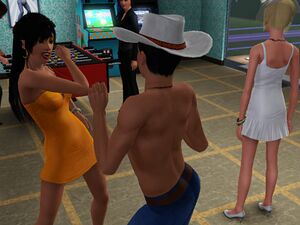 Sims having fun at a bachelorette party.

The party system in The Sims 3 is more advanced than in previous games in the series. Party is the main element of Sims with party animal trait. Sims can invite up to 12 Sims to the party, but sometimes the guests may invite their household members too. The party guests may or may not bring along a food platter when they arrive. If the host of the party is a party animal, the chance guests will bring food is increased by 25%.

With the game being expanded to an open world, inactive households may also throw a party. Depending of the relationship, the host may invite an Sim from the active household to come. The invitation is received through a phone call, with the prompt asking the player whether their Sim will be attending it at the noticed time. Sims that hadn't been invited can be directed to crash the party. The house where the party occurs has a map tag of a purple icon with balloons and confetti on it.

Unlike The Sims 2, parties in The Sims 3 don't have a meter or moniker that displays whether the guests are having fun or not. Instead, the party will be evaluated once the guests are leaving the party one by one. Sims will then receive a moodlet depending on how well the party was going. However, having a bad bachelor/bachelorette party will give a worse moodlet.[TS3:G] Also, unlike The Sims 2, guests will actually leave when they are scheduled to do something, such as go to work. So, try throwing parties on weekends, when most Sims have the day off, or later in the evening.

Sims can also call for services to help with the party, such as party DJ, mixologist, or performers. If Late Night is installed, Sims from other households may occasionally throw a party or seasonal party[TS3:S] and a purple map tag will be displayed from map view. If they have a good relationship with the Sims, they might be invited. Otherwise, Sims have the option to crash the party if they're not invited. Occasionally, Sims might get the wish to crash a party or invite a celebrity in a party. Also with Late Night, Sims can convince others to interact with other Sims, e.g. talk, tell joke, or even make out.

The invite guest interface for planning a party has been revamped. In the left table, the player can choose what kind of party to throw, when it will start, as well as the party attire. Players can set the party to start at time between 8 AM and 10 PM, though the start time has to be at least 1 hour later than the time the party is being planned.

The party attire depends on what kind of party is being held. Generally, Sims can set casual attire for most parties. Other than casual attire, formal and swimsuit attire can also be selected. When throwing a slumber party, sleepwear is the only available attire. Bachelor/bachelorette parties only have "Dress to Impress" as the party attire.

Once a party is set, players will be notified that the party is about to start 1 hour before the set start time. If the party is going to be on a community lot, Sims will be transported to the venue.

There are various kinds of parties available.

Throwing a party at a venue costs money. While planning a venue party, Sims can choose to make exclusive access to the party. Exclusive access enables only the guests who are invited to appear, while other Sims may not come to the venue. Giving an exclusive access adds an extra 60% to the fee. Below is the table of lot assignments that may be rented for a party.

The message given when a pregnant Sim attends a costume party. 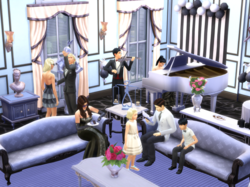 A black and white party.

Parties are featured in The Sims 4 and are referred to as a social event. There are a variety of party types, ranging from house parties to more formal dinner events. Social events can be held at any time of the day by using the phone of the would-be host Sim. Only teens or older will be able to book a social event, although they can do so on behalf of the actual celebrant(s)/host(s) in their household. Unlike previous versions of the game, the household will not get a visit from the police if the noise gets out of control or if the party still goes on late into the night (although in the City Living expansion pack, Sims from neighboring apartments may occasionally complain).

Each party will have a timer with goals specified for the party. The timer starts immediately after the social event is booked on the phone and the player will receive a bronze, silver, or gold medal and exclusive items on how the party succeeded. A party can be ended at any time by clicking on the timer but doing so prematurely will give the host Sim a negative moodlet. Like The Sims 3, Sims may rent a venue and throw a party at a community lot.

Note that all parties timers can be disabled by not checking the party timer box when arranging the social event.

Sims who are currently at school or work at the time the invite was sent will not be able to join. However, an invited Sim whose school or work hours begin in the middle of the social event may be able to stay if they do not belong to the same household as the host Sim. Sims can only invite other Sims they have personally interacted with; this is important if parents want to throw parties for their children or want their child's friends to be invited.

Retrieved from "https://www.thesimswiki.com/w/index.php?title=Party&oldid=948911"
Categories:
Cookies help us deliver our services. By using our services, you agree to our use of cookies.