From The Sims Wiki, a collaborative database for The Sims series
(Redirected from Professor)
Jump to navigation Jump to search 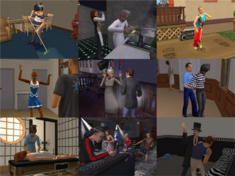 Non-playable characters (NPCs) are characters that cannot be played by the player from the game's start. They are in every Sim game: The Sims, The Sims 2, The Sims 3, and The Sims 4. (While townies are considered to be a class of NPC, they are largely outside the scope of this article.)

There are two main types of NPC; ones that through relationships and/or simple cheats will be able to be Playable Sims without any programming errors and ones that were specifically not meant to be played. In The Sims, all NPCs, other than the townies, are of this second type. Sims cannot build relationships with them, and most either can't be interacted with at all, or only have a few interactions that are related to their function. In The Sims 2 and The Sims 3, most NPCs can be interacted with, at least when they're not on the job, and Sims can build relationships with them. Also, some may appear on community lots, where they can essentially be treated as townies.

Except for the townies, NPCs in The Sims are not full-fledged Sims. They have special character files which contain their names and define their appearance, and which control what they can do and how (or whether) they can be interacted with.

These NPCs can be hired through the phone to perform specific services around the house.

These NPCs can be called through the phone and will be automatically summoned if the appropriate alarm is triggered. They will fine Sims for false alarms.

These NPCs will perform their duties automatically and cannot be interacted with by other Sims.

These NPCs will appear on the lot only during specific situations. Most cannot be interacted with beyond their limited role.

These NPCs can only appear after casting specific spells or charms or when activating certain objects. Once summoned, they will perform actions around the house for a period of time before dispersing.

All community lots in The Sims spawn a janitor, who does general clean-up and repair work on the lot. Community lots on Vacation Island, and in Studio Town and Magic Town, also spawn a "lot director" who can provide information about some aspects of gameplay. On Vacation Island lots, a costumed mascot will arrive in the morning and leave at night, and an indoors maid will appear if a hotel desk is present.

These NPCs will play instruments and other Sims can watch the performance and tip them.

The Sims 2 NPCs are much more colorful. For starters, basic NPCs can be interacted with in the same ways that other Sims can, at least when they're not on the job. They can be talked to, befriended, invited over, married, etc. They can be male or female, and each has a different face, hair color and name. They generally make more logical decisions, though there are exceptions. A neighborhood will usually have three NPCs of any given type (maid, etc.). If an NPC dies, becomes playable or gets turned into a vampire or werewolf, a new NPC will be generated to take the old NPC's place, but some NPC's death can cause corruption. An off-duty NPC can become a witch, and an NPC who becomes a witch will continue to do their job, although they may wear either their uniforms or their witch clothes. When The Sims 2: University is installed, every NPC and townie gets a memory of going to college, whether they did or not.

Some NPCs might corrupt the neighborhood, or even the entire game if they are made selectable, moved in, or changed in any way. Most of these unsafe NPCs have the [3] note.[1]

Townies form the largest class of NPC. Townies wander around the neighborhood or randomly walk by Sims' houses. There are many types of Townies in The Sims 2.[2]

Service NPCs are NPCs that help Sims around the house.

Emergency NPCs arrive immediately after Sims call them on the phone, or when summoned by an alarm.

Other than hired Service NPCs, there are also some Service NPCs who come on some occasions.

These NPCs usually wander around the town, or even walk by Sims' houses.

Special NPCs come when a special or rare occasion occurs.

Some NPCs only appear as thumbnails, cannot even be met. and never appear in the game. NPCs in this category are not included in any category above.

There are some objects that move because there's an invisible NPC that makes them do so. The names of these NPC's are visible when using the Tombstone of Life and Death.

Many NPCs in The Sims 3 can become playable, mainly through befriending them and inviting them into the active household. Since The Sims 3: Late Night the CharacterImport.xml in world files has been tuned to specify preferred NPC roles for homeless Sims.

For a full list of ways to make NPCs playable see Turning a Townie into a Playable Sim.

These Sims will normally stick around to patrol the house after their job is done allowing Sims to talk to them. 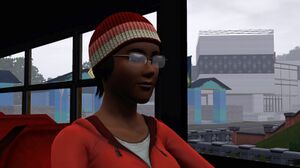 Retrieved from "https://www.thesimswiki.com/w/index.php?title=Non-playable_character&oldid=963358#Professor"
Categories:
Cookies help us deliver our services. By using our services, you agree to our use of cookies.