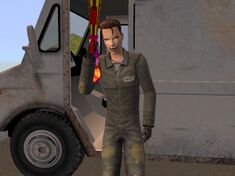 A repo-man in The Sims 2

The repo-man is an NPC that visits a Sim's residential lot when their bills have been unpaid for too long. Over time, after bills have been delivered to a house, they change color, going from white, to yellow, to orange, and finally to red; it takes approximately two days for the color to change. As they progress through the colors, the need to pay them becomes more and more urgent. Once bills stay red for more than two days, the player will be warned at 7:00am that they must be paid immediately. The player has until 6:00pm the next night to pay; otherwise, the red bills will explode and summon the repo-man. It is impossible to enter build mode or buy mode after a repo-man enters the lot without cheats.

When summoned, the repo-man will arrive and begin to confiscate household items as payment for the unpaid bills. The repo-man usually takes one or two items, but if the Sim is in a large amount of debt, he may take several. The item(s) he takes approximately add up to the amount the Sim owes. The Sims of the household get a negative memory for each of the items taken,[TS2] and may periodically cry about the lost item(s).

In most of The Sims games, he wears dark attire. He will come onto the lot and use a gun-like device on whatever he is going to repossess. The gun's special effects may vary from game to game, but the result is that the item vanishes. 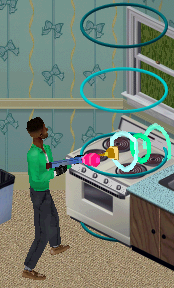 Bud the Repo-man in The Sims repossessing a stove.

In The Sims, there is only one repo-man named "Bud", who will arrive on foot when summoned. Sims cannot interact with him, and they are otherwise powerless to stop him. When finished, he will simply leave.

As The Sims had the ability to create a family that only contains children, such families are at risk of a repo-man visit, since only adults can pay bills. This can be prevented by using the move_objects on cheat and deleting the mail woman before she puts the bills into the mailbox. Later games in the series prevented this from occuring by requiring at least one adult in the household.

If the player removes the doors leading into the house, the repo-man will simply use his gun outside, and the object will still be repossessed.

The repo-man in The Urbz: Sims in the City is Harry Snivel, who is also the landlord and one of the three main villains in the game. In order to prevent him from taking the Urbz's items, players can put all their belongings into the inventory, but after a moment he will say, "You don't even have enough items to pay the rent!" 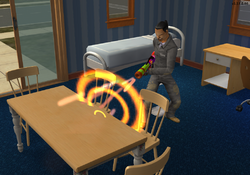 A repo-man repossessing a table in The Sims 2.

In The Sims 2, repo-men now have different appearances that vary from neighborhood to neighborhood. They, however, do not have "real" names, and cannot be interacted with. When summoned, they will arrive in a truck, wielding their gun-like device, and will laugh and cackle whilst repossessing objects. When finished, they will return to their truck and leave.

Repo-men have incomplete character files, and should therefore not be interacted with outside their designated in-game purpose. Doing so will corrupt the neighborhood that is being played, which can only be fixed by deleting the neighborhood. If a repo-man is made playable, he will have no voice and his Plumbob will be inside his body, rather than above his head.

If he arrives, the player can kick him off the lot with the use of testingcheatsenabled by shift clicking on him, selecting "Force Error", and then deleting him. This will not cause any corruption or issues, although the truck won't be automatically removed, and will need to be deleted in the same fashion. If the player removes the doors leading into the house, he will use his teleporter to gain entrance.

The message shown when the repo-man has nothing to take.

If the household does not have any objects that can be taken, the repo-man will criticize the family for wasting his time, then leave. If Nightlife or later is installed, the player can simply place all items in the inventory before he arrives, and then replace them when he's gone.

Warning
Do not attempt to add the repo-man to a household, or interact with him outside his designated in-game purpose (e.g. Turning him into a supernatural creature, such as a werewolf or vampire). Doing so will corrupt the neighborhood he is in. 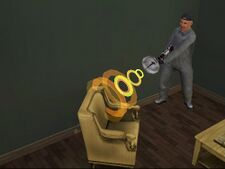 Alan Watanabe, the local repo-man of Sunset Valley repossessing a chair in The Sims 3

In The Sims 3, sinister music will indicate the repo-man's presence. If he is present in and players try to save the game, the game will ask the player if they want to save in the current situation. Build/buy modes and edit town cannot be entered while the repo-man is on the lot.

Like in The Sims 2, the repo-man can be removed from the lot with testingcheatsenabled by shift-clicking on him, selecting "Object...", and then "Delete it". However, the truck (or boat, if in Isla Paradiso) will need to be deleted manually. If the player removes the doors leading into the house, the repo-man will use his teleporter to gain entrance. Moreover, locking the doors or using the alwaysallowbuildbuy cheat[TS3:A] and building walls around the repo-man will not stop him.

If the household does not have any objects that can be taken, the repo-man will subtract household funds that are approximately of the same value as the amount owed. Additionally, if forced to come to the lot with testingcheatsenabled, the repo-man will take a large amount of items (sometimes at least twenty items) regardless of whether any debt is owed.

If the player's Sims live in a house built on an ancient burial ground, the repo-man will suck up the graves with his gun. He will then warn the Sim to pay their bills or he will be back.

One commonly experienced problem in The Sims 3 is that when a player changes their active household but then returns to the original lot after a few days, a repo-man may appear after a few Sim-hours as the Sims did not pay the bills in the player's absence.

Repo-men were initially added to The Sims 4 in the Discover University expansion, but they are also in the base game as of patch 95. Repo-men will arrive to repossess a household's furniture after their water and electricity has been shut off for neglecting their bills. This will absolve their bills. However, this will not absolve them of their debt, and they still have to pay their loans. Until they do, repo-men will keep showing up each day.

The message that appears when there is nothing to repossess.

Repo-men will also repossess a university student's furniture if they do not pay off any student loans they took out. If there is nothing to repossess, the repo-man will complain about it and leave, but they will return as soon as the household has something of value for them to take again.

If the repo-men is about to take a valuable object, Sims can ask them not to take object and hope that they'll move to another object for repossession. Sims can also try to appeal to humanity, bribe with simoleons, or fight the man. If successful the repo-men will not repossess an object and leave the household.

The message displayed in The Sims 3 when a repo-man encounters a fire.

Retrieved from "https://www.thesimswiki.com/w/index.php?title=Repo-man&oldid=955323"
Categories:
Hidden categories:
Cookies help us deliver our services. By using our services, you agree to our use of cookies.