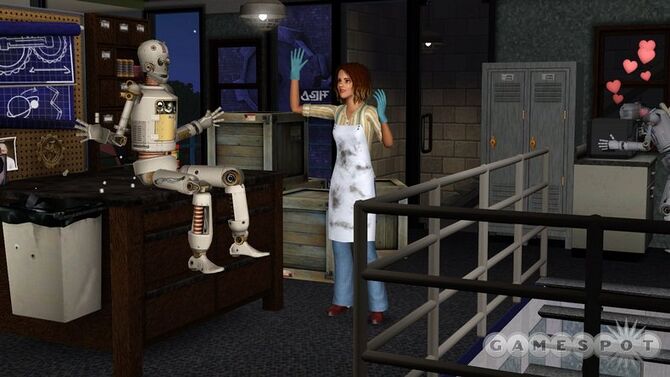 SimBot
A life state · Featured in: 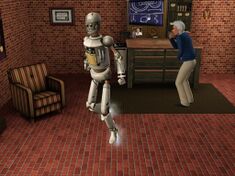 Not to be confused with Servo or Plumbot.

SimBots are a life state introduced to The Sims 3 in The Sims 3: Ambitions and The Sims 3: Pets for console. They harken back to Servos, however they differ in many important aspects. In the game code, they are identified as "FrankenSims" and "Frankensteins".

These playable creatures have two eyes instead of the single camera-like eye of Servos, and they have a more robotic, less streamlined appearance. This is consistent with the belief that The Sims 3 is set 50 years before The Sims 2 and 25 years before The Sims, and has led to speculation that SimBots are prototypes for Servos. Servos from The Sims 2 appear as golden statues in the science labs, so it appears that they are a long-term goal. SimBots can be male or female.

SimBots have most of the same needs as human Sims, except for hygiene. However, their needs are named differently and have a gray color.

Unlike the Servos of The Sims 2, SimBots possess no ability to shut down to conserve power, or use solar power to recharge, and may sleep in a bed as any other Sim does. Sleeping SimBots emit ones and zeros instead of Z symbols as a reference to binary code. Other Sims, and even other SimBots,[2] will react to SimBots with revulsion if the Simbot is close enough to the said Sim, in the same way as they might react to ghosts and mummies, although those with traits such as Party Animal or Brave will cheer instead. This will make them interrupt what they were doing and cancel the whole action queue, and they won't be able to get back to what they were doing by themselves: this is not limited to the first meeting with the SimBot: any time a SimBot leaves the Sim and return to the range of the Sim, this reaction is triggered. 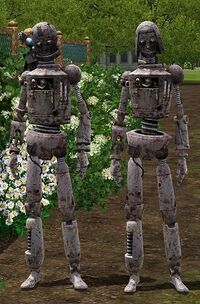 Male and female SimBots differ in the structures of their heads and torsos. Additionally, the piece which connects the torso and pelvis is longer and narrower on female SimBots.

While SimBots can eat food, they prefer scrap, and a single piece will completely restore their hunger and provide the Great Meal moodlet. SimBots also receive a variety of unique interactions, such as Show Off Features, Discuss Oil Brands, Insult Puny Human Brain, etc. They can also converse with inanimate machines such as food processors to regain their social need. Not having a Hygiene need, they don't need to shower, and will short out if they do. They can spin their arms like helicopter blades to smash objects for scrap metal, although they can be fined for doing such on public property, except in junkyards. They can also WooHoo, but cannot have children from interaction with Sims or other SimBots.[3] They can "reproduce" by inventing new SimBots, but this requires them to go through the extended process of getting this ability. They also get a special SimBot only special moodlet from Inventing. Like all summoned Mummies, SimBots are classed as elders by the game. SimBots come online with automatic ranks in both the Handiness and Inventing skills.

Tip
Instead of calling a repairman or having a Sim repair the SimBot, the player can use the testingcheatsenabled cheat to remove the "Short Out" moodlet. This can be done by pressing Shift+Ctrl+C, then entering that code, then pressing the moodlet and using Ctrl-click to get rid of it. A Sim who has a Moodlet Manager can use it on the SimBot to achieve the same outcome.

All SimBots are created with the Hydrophobic trait. If a SimBot gets wet, for example by forcing them to shower or swim, they will shut down and get a "Short Out" moodlet which lasts for four hours (it has also been reported that a SimBot may short out for no apparent reason). During this time, other Sims can repair the SimBot, or can choose to Reprogram them, which allows a reselection of their traits, including the ability to remove all of their traits. There seems to be no lasting damage from shorting out a SimBot, so it can be useful for redesigning the personality of a newly created SimBot, as the only other opportunity to select traits without using cheats is the Mid-life Crisis reward. It has been reported[2] that reprogramming a SimBot will reset its relationships. 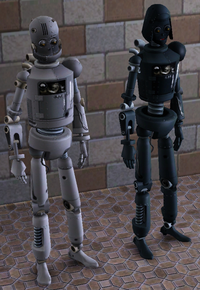 Even though SimBots are hydrophobic, they have no problem mopping up puddles of water or being sprayed by a sprinkler. However they will short circuit if commanded to play with the sprinkler. Exploring dive wells or being caught in a steam trap will also cause them to short circuit, albeit not every time. Even though they do not like swimming it is still possible to drown a SimBot.

SimBot Killed by a Meteor

SimBots cannot be singed or set on fire, allowing them to safely detonate objects without any negative effects even if they are directly caught in the explosion. SimBots are not only immune to the negative effects of electrocution, but will actually get the Energized moodlet and have their Charge need completely restored. This is most reliably reproduced by having a SimBot attempt to repair or upgrade an electrical object on top of a puddle, such as one created by turning a gardening sprinkler on indoors; but it can also occur during failed repairs or upgrades, from getting caught in an electrical trap, or other ways in which a Sim may be electrocuted.

Making a SimBot sleep in the Cursed Sarcophagus of the Kings for an extended period of time will replace one of the SimBot's traits with the Evil trait. They do not gain the Good trait from sleeping in the Blessed Sarcophagus of the Kings. It is currently impossible to create a SimBot-Mummy hybrid, although SimBot ghosts are possible. SimBots can die of old age, and can also drown, starve or be killed by a meteor[TS3:A].

Since they do not have malleable skin and (technically) do not wear clothes, SimBots are unable to receive tattoos or makeovers. They do not receive the "Completely at Ease" moodlet when opting for spa packages, though they do retain an "Energized" moodlet of the same magnitude, but not the duration.

SimBots have jets in their feet allowing them to hover from place to place. They use this mode of travel as a substitute for running, and also use it when going between nearby lots.

SimBots initialize in a small variety of colors, often with rusty textures.

On the 28th of April TheSims3.com ran a promotion for The Sims 3: Ambitions, using a YouTube video featuring a SimBot recolored in the Iron Man suit colors. This suggested that SimBots might be recolorable in either Create a Style or Create a Sim. One hands on preview states that SimBots cannot be recolored.[4] This is confirmed as partly true, as using mods, it is possible to bring a SimBot into dresser mode and recolor them.

Incidentally, it is also possible to give a normal Sim a recolorable SimBot body in Create-A-Sim mode through usage of the unlockOutfits cheat. However, doing this has no effect on the Sim's abilities or behavior.