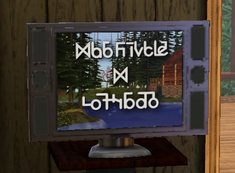 An example of Simlish text in The Sims 3.

The voice actors of The Sims 4 each have their own Simlish dictionaries, so they know all the translations. However, there is no official Simlish dictionary available for the public, but an unofficial dictionary, based on The Sims 2, can be found here. (Archived)

Simlish was created because Will Wright, creator of The Sims, knew that the game needed dialogue, but thought that using real life languages such as English would cause the dialogue to be repetitive and would be expensive translating the entire dialog Sims may say. Wright did consider experimenting with Navajo, a Native American language, but decided that it would be better to use a "nonsense language" that couldn't be translated, because the meaning could be left to the player's imagination.[1]

Some say it may be a mixture of Ukrainian, Navajo, Romanian, Irish, Tagalog, and even gibberish,[2] but this has not been confirmed.

Simlish was first used in SimCopter, a flight simulator game released in 1996.

On occasion, non-Simlish phrases are heard in the Sims games.

Appearances in The Sims[edit | edit source]

The Sims featured a lot more Simlish than SimCopter (the first Maxis game to feature Simlish), and was also a lot clearer. The phrase "sul sul", which in later games is used for both greetings and saying goodbye, is solely used for saying goodbye, and only by adults when they go to work. Some other common phrases are "wawa bralala?" "ralalalalib bubaya," "commun snanna," and "o frazinnratt," but the number of available phrases were limited, which led to some repetition. The voices were provided by Gerri Lawlor and Stephen Kearin.[citation needed]

The Sims 2 comes with more audible and newer phrases like "e wam." Common phrases are now "daj daj" and "ackabunad." Common greetings include "sul sul" and "dag dag". When there is a problem, Sims will say "shooflee" and "anaconda" often. When some female Sims walk by another Sim, their greeting varies from "Ooh, voodoo!" to "Lick a rock!" They reportedly swear sometimes. Much to the amusement of many players, pregnant Sims have been known to shout "WooHoo!" while giving birth. When female elders play at the poker table in Nightlife, they will often say "Texas Goushem" which is probably a reference to Texas HoldEm (a type of poker card game). In the Pets expansion pack, when a Sim is teaching their pet to "shake," they will say "shurb" repeatedly, as well as when they teach to "speak," they will say "sperk."

The Marco Polo from Seasons was originally named Timle Tourneau, and you can clearly hear Sims exclaiming "Timle" and "Tourneau" instead of "Marco" and "Polo". Tim LeTourneau is, in fact, one of the staff of EA. When Witches and Warlocks in Apartment Life use the cauldron, they will say the last names of EA staff members, such as Macarevich, Majekodunmi, and Parmeley. 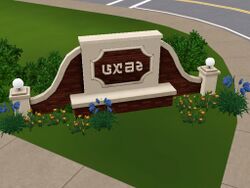 A sign written in Simlish, seen in Sunset Valley

The Sims 3 has the largest Simlish vocabulary. Common phrases are "Dag Dag," "Sul Sul," "Swebsi Madoo," "Madoof Napso," Abondandlain...En Som," "Ma bi daa," "Hubble Herbi," "Etne Condoroy," "Shawbo Glub," "Switz Zorg," "Tippaha Yooredful," "Shabow," "Sussel," "Ibny Bibzo Toy," "Ayba Miyba Mo," "Sa Dooga," "Ib Ou,", "Shamble Natzo Thorg!", "Narbo Puhzed," and "Yargbo Bay Tazzle." Sims also shout "Shamo! Jatzkey,", "Wala," or, most often, "Ugh! Chee Waga Choochoo! Ugh!" when they cannot reach a certain area (accompanied by a "No Footsteps" speech bubble). Female Sims will often use the phrase "Reddage!" (pronounced RED-IJ-AY) when they are angry about something. "Un Jandebo" is common for a flirtatious action. A Sim teaching a toddler to speak will sometimes say a phrase that sounds like "Way to go!". As a lot of music in the Sims 3 are actual songs, you can find the translations of lots of words by listening to the lyrics of both the English and Simlish versions of the song.

When a Sim is about to WooHoo (also when about to use the bathroom) and someone else besides the partner is in the room they may shoo the sims and say "Blanche, Blanche!" (White, White in French)

Also when Sims are hungry they say things like, "Ooooh DABEE DOOH!" and "Oooh saga DAH!"

The Sims 3 is also the first Sims game where players can adjust the Sims' voices to sound exactly as they want them to sound.

In University Life, a professor in the Thomas School of Art can be heard speaking Simlish with a French accent.

The Sims 4 has a wider variety of Simlish phrases, some of them varying between voice types. "Sul sul" and "Dag dag" remain as the common greetings, and Sims often say "Vadish" when saying thanks. However, Sims may say greetings in a short version, saying the word only once, not repeated once in the sentence. Other common phrases include "Yabahorne", "Awu venae", "Yim bala", "Wibbs", "Muchi pichi", "Deroi" and "Dorishi". Sims who use the Respectful Greeting or demonstrate the Proper trait, they'll often greet the other with "Wutushu, yimsimsie."

Simlish as seen on the TV in The Sims 4.

On The Sims 4 website, there is a note in Simlish, next to the newsletter subscription.

The note is known to be a code related to The Sims 4.[3] The code purpose is to introduce some of the team members who are working on The Sims 4, and each of them reveal the Simlish code one by one, with the following order:

Because you took the time to decode this message, here's why we love you:

We're making this game for you, because of you. Thank you for being the greatest fans in the world.

The Simlish note is roughly translated, because the translated note doesn't exactly match the Simlish letter-by-letter. If one tries to decode with the custom font below, they will end up with Lorem ipsum, although with some modifications in the form of keyspam-like gibberish.

It has been stated that Sims in The Sims Medieval do not speak Simlish, but rather a precursor to Simlish known as "Old Simlish." Compared to modern Simlish, Old Simlish has a more elegant sound, and more closely resembles languages such as French (in one such example, when someone kneels to a King in front of a throne, the King may say "Deboo!", which is similar to "debout", the French word for "stand up"). The difference between Old Simlish and Simlish may be similar to the differences between modern English and Middle English.

The Sims 2 features many renditions of popular songs sung by the original artists. Some have music videos created by EA, such as Natasha Bedingfield's "Pocketful of Sunshine" or Katy Perry's "Hot 'n' Cold." However, there are also other songs that don't feature music videos but can be found in the game, such as The Veronicas' "When it All Falls Apart" or Tata Young's "Zoom." These songs can be found in various radio stations in the game depending on the song's genre.

Some of these songs are only available on Sims radio when certain expansion packs are installed. Ones with music videos often give clues to which expansion pack they are found in, such as Hot 'n' Cold (Apartment Life), Pocketful of Sunshine (Freetime), Fa Fa Fa (Freetime), and Smile (Seasons).

These are a few examples of Simlish music videos.

There is a custom Simlish font available at ModTheSims. The Simlish font is based on the Simlish symbols that are commonly used in The Sims 3 and The Sims 4 such as the one that appears on TV. This custom font is not official, and therefore cannot be used to decipher Simlish texts that appear in the game. It's worth noting that there are many variations of Simlish throughout the game, and this custom font is only one of the variations. 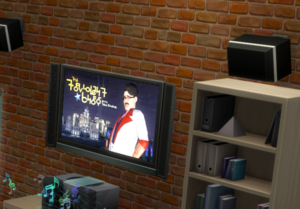 Simlish text which appears while watching the comedy channel in The Sims 4. Translates as "The Tonight Show with Tony Cliffton"

However, there is an instance where this custom font can be used to read a Simlish text. Text on the TV in The Sims 4 can sometimes be translated by using the custom Simlish font. In the image to the right, the text appears to translate to "The Tonight Show".

SimCopter was the first game to feature Simlish.

In SimGolf, Sims will speak Simlish while a translation appears above their heads.

In both SimCity 4 and SimCity Societies, citizens can be heard speaking in Simlish if the player zooms in close enough. In SimCity 5, the citizens speak Simlish when giving the player missions, and a text bubble giving a translation appears.

In non-English versions of Spore, Simlish is spoken by Steve and "the voice in the tunnel." The Simlish used is the same no matter what non-English language it is.

In the MySims series, the Sims speak Simlish when talking to each other or expressing an emotion.

Retrieved from "https://www.thesimswiki.com/w/index.php?title=Simlish&oldid=967108"
Categories:
Hidden categories:
Cookies help us deliver our services. By using our services, you agree to our use of cookies.