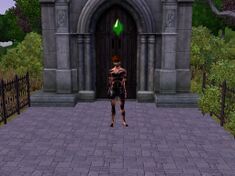 A singed Sim outside the mausoleum.

When a Sim fails certain scenarios in The Sims 3, they will become singed. This is a very common penalty throughout the game. Being singed consists of both a cosmetic penalty - Sims become sooty and black, with messy hair standing on its end and end up in just their underwear - and a negative moodlet. The cosmetic penalty will disappear when the Sim bathes, but the moodlet may not. If a Sim tries to repair an electrical item while singed, the chance of getting killed by electrocution is 100%.[1] Also if a singed Sim is set on fire, the duration of the "On Fire" moodlet will be halved, giving the Sim less time to extinguish themselves before they die.

SimBots are immune to being singed, and are also immune to fire and electrocution, while other life states such as humans and vampires are not.

Being singed also prevents humans and vampires (and ghosts of humans or vampires) from changing clothes until they take a shower/bath or use a Shower in a Can[TS3:WA]. If the player tries to have them change clothes by using Change Outfit..., the message "Can't change clothes while singed!" will appear.

The Moodlet Manager can be used to remove this moodlet, which will allow them to change outfits.[2]

Sims such as a human and vampires that are caught in a Fire Trap and singed by it will cause a warning to appear. SimBots, being immune to fire, do not get the message. Ghosts can get the message from being singed by fire, but they cannot be killed by it.

Photographing a singed Sim is one of the challenges in the Photography skill, under the Oh the Calamity! category.

How to cure being Singed[edit | edit source]

If Good Times[TS3C] or the Moodlet Manager are used to remove Singed, the Sim can change their clothes. However, the player will still not be allowed to change clothes through the dresser or use the Catalyst Chemistry Lab Station.[TS3:G]

Life States that can be singed[edit | edit source]

Tasks That Can Get a Sim Singed[edit | edit source]

Retrieved from "https://www.thesimswiki.com/w/index.php?title=Singed&oldid=948206"
Category:
Cookies help us deliver our services. By using our services, you agree to our use of cookies.