The Social Bunny is an NPC in The Sims 2 that visits teen and older Sims when their social need is too low. If a child or younger Sim's social need gets too low, they will not receive a social bunny but may be taken by the social worker. Like the Therapist, social bunnies will only be visible while the Sim who is hallucinating them is selected.

Social bunnies have incomplete Sim data, and therefore should not be made playable or interacted with outside their designated in-game purpose.

If multiple Sims are in social failure, the other bunnies will be seen when a lonely Sim is active, although they will be invisible and cannot be interacted with. The bunnies may interact with each other, however. Social bunnies come in blue, yellow, and pink. Generally, social bunnies of a different color will be friendly with each other, with blue and pink ones often going romantic. Bunnies of the same color will usually be hostile towards and even start fights with each other.

There has also been a bug where the Social Bunny can actually become a friend, and can be called over the phone and invited over. Occasionally, there is also a bug where Sims will bring the social bunny home as a friend from work, although the social bunny will not appear in this circumstance.

The Social Bunny vs. The Tragic Clown[edit | edit source]

The social bunny's predecessor is the Tragic Clown, introduced in The Sims: Livin' Large. The tragic clown came whenever a Sim's overall mood was poor and the family had a painting of him somewhere on the lot. Like the social bunny, the Tragic Clown will attempt to make Sims happier by entertaining them, but will always fail and worsen the situation. The social bunny will appear only when the social motive was critically low and always succeeds in raising it.

References in other games[edit | edit source]

Although social bunnies do not appear in The Sims 3, there are number of Easter eggs dedicated to them. For example, "Social Bunnies United" is the name of a charity Good Sims can donate to.[TS3] There are several objects containing references to the social bunny, including a poster, a music box from Ambitions, a bookshelf from Generations with a stuffed social bunny doll, and a prop statue of it in Showtime. Sims may also paint a brilliant medium painting of the social bunny or see one on the KidZ Zone station on the television (one may also be seen on the Kidztube station in The Sims 2). 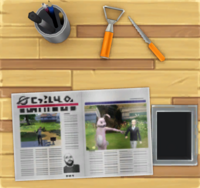 A pink social bunny costume is unlockable in MySims Agents.

In The Sims 4, Sims may also paint a picture of the social bunny. A newspaper clipping depicting the social bunny in Willow Creek can be seen on the Pumpkin Carving Station.[TS4:SS] 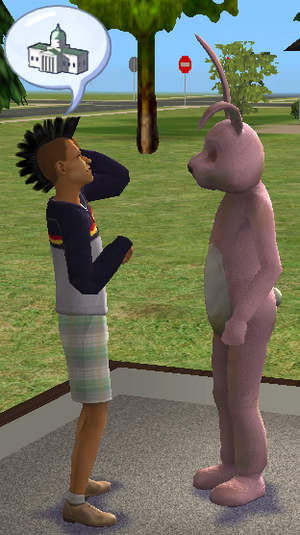 A Sim having a conversation with his Social Bunny 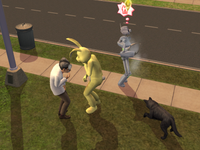 Warning
Do NOT attempt to add Social Bunnies to a household, make them selectable, or tamper with them in any way or form. Doing so will corrupt the neighborhood they are in.

Retrieved from "https://www.thesimswiki.com/w/index.php?title=Social_Bunny&oldid=299082"
Categories:
Hidden category:
Cookies help us deliver our services. By using our services, you agree to our use of cookies.