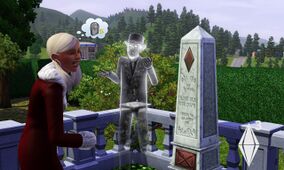 The bottom of the gravestone shows the knife, fork, and plate.
Starvation occurs when a Sim has gone too long without eating. In The Sims and The Sims 2, Sims starve when their Hunger motive has become completely depleted. In The Sims 2, this can happen from prolonged exposure to an "evil" snapdragon bouquet[TS2:OFB], after a failed wish for money from a Wishing Well[TS2:S], or when a good or evil witch sits on an opposite-alignment throne for too long[TS2:AL]. However, these things will usually not cause a Sim to starve unless their Hunger motive is already low.

In The Sims 2, the ghost of a Sim who died of starvation will be a transparent white. These ghosts will open and close the fridge, and will take food. These ghosts get angry if there is no fridge on the lot or if the fridge is empty. Babies, toddlers, and children cannot die of starvation; they will be removed by the social worker before their hunger drops low enough. Even if testingcheatsenabled is used to drag the Hunger motive down to zero, they will not starve. You will also see a Sim wave their arm in the air as a signal that it is expiring.

In The Sims 3, a Sim starves if they get the "Starving" moodlet, and it expires. Since a Sim will only get this moodlet after the "Hungry" and "Very Hungry" moodlets have expired, starvation takes longer than it does in other Sims games. In The Sims 3, the ghost of a Sim who died of starvation will be purple, and the gravestone of that Sim will have a picture of a knife, fork, and plate on it. Vampires in The Sims 3: Late Night cannot die of starvation, but can die from thirst. Due to technical limitations, a Sim can only die of starvation when on a lot, as the gravestone can only be spawned on a lot. As a result, Sims do not die in areas that are outside of lots, such as roads. Pregnant Sims cannot die from starvation. With testingcheatsenabled on, even if the player drags the hunger need of a baby, toddler, child, or pet down to zero, the Sim will not die, but will be taken away by the social worker instead.

In The Sims 4, this works the same way as The Sims 3, except that it goes through two moodlets instead of three. The hungry Sim goes through the "Hungry" moodlet. If hunger is not fulfilled after 24 hours, that changes to the "Ravenous" moodlet, which lasts for another 24 hours. The Sim dies of starvation after the "Ravenous" moodlet expires. The limitation that Sims can only die on lots has been removed, so Sims can collapse from starvation in the middle of the street.

Retrieved from "https://www.thesimswiki.com/w/index.php?title=Starvation&oldid=955202"
Category:
Cookies help us deliver our services. By using our services, you agree to our use of cookies.