From The Sims Wiki, a collaborative database for The Sims series
< User:TheTimMan‎ | Sandbox(Redirected from User:WikiBuilder1147/Sandbox/Archive 1)
Jump to navigation Jump to search

Archived page
This page is an archive. Please do not edit the contents of this page.

The Sims Wiki is a collaborative encyclopedia for everything related to The Sims series that anyone can edit! Our wiki was created in February 2005, and currently has 16,285 articles. 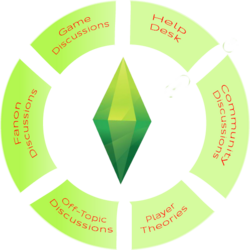 Bonehilda is an NPC that was introduced in The Sims: Makin' Magic, and later returned in The Sims 3: Supernatural and The Sims 4: Paranormal Stuff. She can be summoned from either a special upright coffin[TS:MM][TS3:SN] or by performing a seance[TS4:PS].

She mainly functions as a maid, with the ability to clean a Sim's house free of charge. However, depending on the game, she can also repair broken appliances, do laundry, tend to a garden, socialize, prepare meals, and care for children. As a walking skeleton, any human maids who see her while they are working may freak out and quit their job, and house guests will generally be tense in her presence. In haunted houses[TS4:PS], she is able to protect the residents by fighting off a vengeful spirit known as Temperance.

Bonehilda will occasionally grab a drink from a nearby bar, sink or refrigerator when she has nothing else to do, which will humorously flow right through her and leave a puddle on the floor. She also seems to be a fan of the Grim Reaper, and might stop to ask him for an autograph if he shows up[TS:MM].

Removing her skeletal appearance using cheats or mods results in a Sim that resembles the Grim Reaper[TS3:SN], or a light-skinned woman with long red hair and green eyes[TS4:PS].

Vote for the next Featured Article · Past featured articles

Today in The Sims history
2002
The Sims: Unleashed expansion pack is released.

Vote for your favorite of two selected items (Sims, neighborhoods, objects, etc.), then come back to see which one wins!

Playful vs. Flirty
Go to The Sims Wiki:Battles to vote for your favorite!

Vote for or nominate a battle 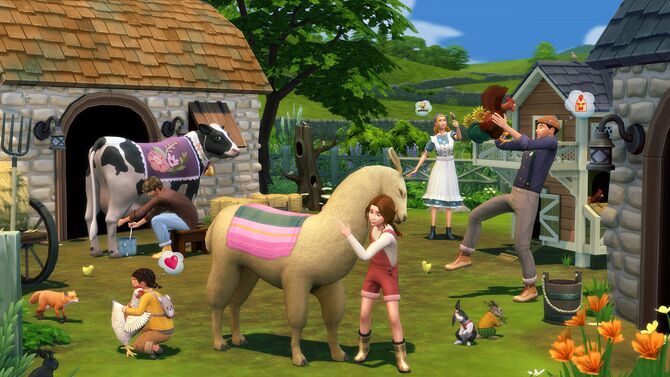 The trailer for the eleventh expansion for The Sims 4 has been released. The Sims 4: Cottage Living will release on July 22, 2021 for all platforms. The pack is focused on country life and includes cows, chickens, rabbits, llamas and foxes as well as the new world of Henford-on-Bagley. (Jun 10, 2021)

A new trailer has been released to officially announce Dream Home Decorator, the tenth game pack for The Sims 4 coming on June 1, 2021. It will feature an interior decorator active career, as well as new types of furniture, including sectional seating, counter-top stoves and built-in ovens. The pack was previously teased on May 17, as part of a "Summer of Sims" promotion by EA. (May 20, 2021)

Bunk beds coming to The Sims 4 in late March

As part of the 21st anniversary of The Sims, a new patch for The Sims 4 has been released. It adds 21 new items made by prominent custom content creators to the game, which includes clothing, furniture and food. In the official livestream for the anniversary, EA has also teased that bunk beds will be added to the game in late March, 2021. (Feb 25, 2021)

EA has released the brand new trailer for The Sims 4: Paranormal Stuff, the eighteenth stuff pack for The Sims 4. It features the return of Bonehilda, the haunted house lot assignment, a Paranormal Investigator freelancer career and seance tables. The pack is due for release on January 26, 2021 on all platforms. (Jan 12, 2021)

The new trailer for The Sims 4: Snowy Escape confirms that it will release on November 13, 2020. The pack features a snowy, Japanese-inspired world called Mt. Komorebi, with mountaintop activities including sledding, skiing, snowboarding, hot springs, and more. (Oct 20, 2020)

An announcement on the main menu of The Sims 4 reveals that the trailer for the next expansion pack will premiere on October 20, at 8 A.M. Pacific Time. Not much else is known about the pack at this time. (Oct 12, 2020)

Today's Events
There are currently no events planned for today.

Retrieved from "https://www.thesimswiki.com/w/index.php?title=User:TheTimMan/Sandbox/Archive_1&oldid=909528"
Hidden categories:
Cookies help us deliver our services. By using our services, you agree to our use of cookies.