A Gnubb Set is an object introduced in The Sims 3: Ambitions. It allows Sims to play a game, Gnubb, that is probably the Sim-version of the Swedish game, Kubb. To win the game, a Sim must knock over all the rabbit figures, on the side opposite them, using a baton. Once all the rabbits on the Sim's opposite side is knocked over, they must knock over the figure in the middle, known as the King. Sims get three chances each turn to knock over a figure. When the King is knocked over, a message appears stating: What a most exceptional game. <Sim> has knocked over the King and won!

It costs $750 and is four by eight plots of land

It is possible to color individual pieces of the game with Create a Style. 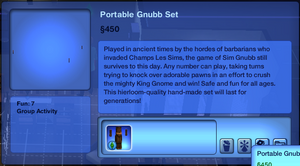 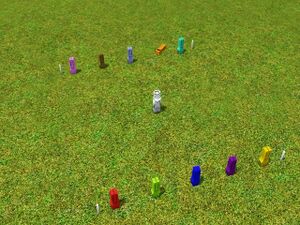 Retrieved from "https://www.thesimswiki.com/w/index.php?title=Gnubb_set&oldid=524510"
Categories:
Cookies help us deliver our services. By using our services, you agree to our use of cookies.