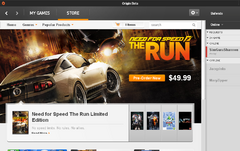 Snapshot of the Origin storefront.

Origin (formerly known as EA Download Manager or EADM) is the digital distribution service developed by EA. Origin is used to download and install digital versions of purchased games as well as their updates. Origin is the chief competitor to Valve's Steam content distribution service. Origin has been a mandatory requirement for all EA titles released since 2011. 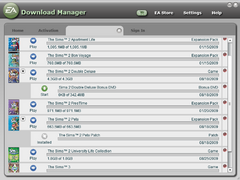 The first rendition of the EADM 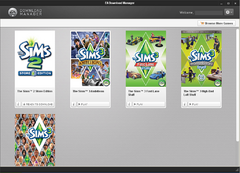 The final rendition of EADM before it was re-branded to Origin.

The EA Store and EADM client were merged and re-branded as Origin in June 2011.

Comparisons and differences between Origin and Steam[edit | edit source]

The Sims 4 is the first title in the series to require Origin for installation, although the game can be played without it afterwards.[1] The service is used for updates and distribution of downloadable content.

Origin supports Windows 7 and newer systems as well as Mac OS X 10.7 and newer. There was a legacy client for Windows XP and Vista as well as Mac Lion 10.7 and Mountain Lion 10.8 but as of January 14th, 2020, the legacy edition is no longer able to be downloaded, with players having to upgrade to Windows 7 or later in order to be able to use Origin and the games provided with it.

There is a page on Wikipedia dedicated to this real-world topic. Click here to view this article's associated Wikipedia page.

Retrieved from "https://www.thesimswiki.com/w/index.php?title=Origin&oldid=966028"
Categories:
Cookies help us deliver our services. By using our services, you agree to our use of cookies.