Body Shop is a tool that came with The Sims 2. It is formally known as 'CaSIE' (Create-A-Sim Independent Editor).

It can be used to create entire Sims as well as custom content for Sims. Custom content and Sims created in Body Shop can be placed into the game through Create a Sim. Body Shop also allowed the Sims and content created in it to be packaged and uploaded to The Sims 2 Exchange, before TheSims2.com was shut down.

With a few exceptions, Body Shop can access any content for Sims that is normally available in Create a Sim. However, it does not, as a rule, allow players to access hidden Maxis content such as NPC outfits, or the alien skin tone and eyes.

In "Build Sims" mode, Body Shop can be used to delete some types of custom content. However, this should be used with caution, as deletion may be enabled for some Maxis content. This can be a particular issue with hidden content that has been unlocked/unhidden with a mod or clothing that has been recategorized with a mod, and might be an issue with some default replacements. Players should not attempt to delete Maxis content from within Body Shop, even if it also shows the custom content "star", as that is likely to corrupt game files.

Each expansion pack and stuff pack has its own version of Body Shop, so a player with several Packs will have several versions, each with its own shortcut. Players should use the version which came with the most recent Stuff Pack or Expansion Pack they own. 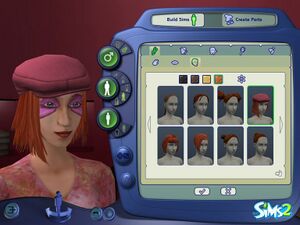 An old version of the Body Shop showing hair styles not in the final game.

An early version of CaSIE was released prior to the launch of The Sims 2, available as a free download and also distributed as a free promotional disk. This version of CaSIE features a more limited selection of assets than that of the game itself, including several hairstyles that were changed before release. These unused hairs are available in the final release, but are hidden in Create-A-Sim. One of the hairs, known as "Meg hair", uses a texture from the final release instead of its original texture. The other hairstyles all use their original assets.

Three "content packs" were released for this version of Body Shop. The Body Shop Starter Pack contains the majority of assets available to CaSIE; without it very few hair and clothing options are available for Sims. A promotional pack for GameSpot was released, containing a Fantasy Warrior Goth Chick Skin, Urban Secret Agent Skin, and a Gamer Dude with a GameSpot T-shirt & Jeans. A promotional pack for FileFront contains a Modern Urban Fighter Gal Skin, Modern Trench Agent Skin and a Gamer Dude with IGN T-shirt & Jeans. All of these outfits are in the final release of the game, but are hidden in Create-A-Sim.

Installing this version of Body Shop on a system with the game itself installed can cause multiple issues, and is not recommended.

Retrieved from "https://www.thesimswiki.com/w/index.php?title=Body_Shop&oldid=949285"
Categories:
Hidden category:
Cookies help us deliver our services. By using our services, you agree to our use of cookies.