Featured Editor
This user was selected as a Featured Editor on The Sims Wiki for August 2014, in recognition of their positive contributions to the wiki.

Featured Editor
This user was selected as a Featured Editor on The Sims Wiki for December 2015, in recognition of their positive contributions to the wiki. 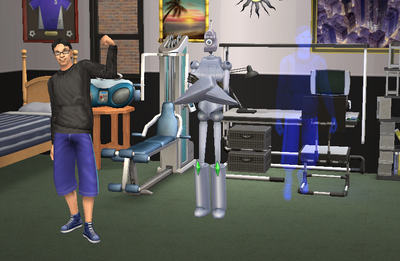 The three branches of k6ka. Human on left, Robot in the middle, Ghost on right.
Human: This is my physical body, much like any other human on earth. You failed biology class, didn't you?
Robot: This is my loyal robot, K6kaBOT. It is an autonomous robot that can think for itself. It also does a lot of the physical labor.
Ghost: This is the ghostly part of me. It can walk through walls and possess animals! Also good for making people wet themselves.
Confused? Don't worry, just remember this: the Human is k6ka, the Robot is k6ka, and the Ghost is k6ka. Got it? Good.

Well, hello there, fellow Simmers. I am k6ka  (

Who am I? I am an administrator on The Sims Wiki, and I am also an administrator at The Last Stand Wiki and on the English Wikipedia. And if you think I reference Wikipedia too much when I speak, that's because I edit too much there.

I am a fairly big WikiHolic - I think about wikis during the day and dream about them at night. I am quite fluent with Wikitext - the thing that makes up Wikipedia and Wikia. I can't stand Visual Editor except for certain circumstances, such as editing a table. I just find source editor much easier, and I get more control over the outcome of the page. It also allows me to fix stuff that VisualEditor either can't fix, won't fix, or VisualEditor causes the problem in the first place. No, I didn't take a crash course or study all night to learn about Wikitext. I find that it just comes naturally the more you edit. And I edit a lot. By now I think you want to throw a wiki-egg at me for wiki-ing too much.

I hesitated on this section since it makes me look like some sort of a bot. Note that I'm not limited to the tasks listed below. I can do more than this table can hold. I'm a human, not a bot. Bleep bloop! Oh whoops..

The majority of cases should be discussed publicly, though in rare circumstances, I allow users to email me privately. But first, read the following...

The Sims games I own[edit source]

*I do not have the Ultimate Collection.
**I have the Steam version of the game.

Retrieved from "https://www.thesimswiki.com/w/index.php?title=User:K6ka&oldid=680534"
Categories:
Cookies help us deliver our services. By using our services, you agree to our use of cookies.