For the object, see Chess table.

Merge
This article or section is being considered for merging with Chess table. Reason: Really no point of it's own devoted article, when this information is brief and useful there 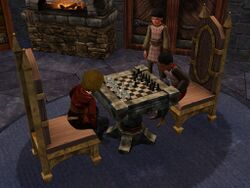 Early versions of chess were played as far back as the Middle Ages.

Chess has been in the Sims franchise from The Sims, through The Sims 2 and into The Sims 3 and The Sims 4. It also makes an appearance in The Sims Medieval.

It's one of the easiest ways for Sims to increase their logic skill. It also provides fun, and since two Sims can play, it can fulfill social needs as well. Children can play, and in The Sims 2, The Sims 3 and The Sims 4, will gain logic skill by playing. In The Sims 2: FreeTime, playing chess builds enthusiasm for the games hobby.

In The Sims 3, a Sim can play a game of chess with the Grim Reaper to save another Sim's life.

In The Sims 4, Sims can ponder moves at a chessboard in order to quickly gain the focused emotion. Sims may also gain the focused emotion during a chess game, especially with higher logic skill, and are more likely to win a chess game while focused. Some aspirations require playing games of chess. Sims seem a lot more likely to cheat at chess in The Sims 4 than in The Sims 2 , as most Sims will seemingly cheat.

Retrieved from "https://www.thesimswiki.com/w/index.php?title=Chess&oldid=386296"
Categories:
Hidden category:
Cookies help us deliver our services. By using our services, you agree to our use of cookies.