Motives, or needs, are the basic physical and mental requirements or desires of Sims and pets. In The Sims 2, The Sims 3 and The Sims 4, Sims in different life states may have different motives, and some motives will drop faster or slower depending on a Sim's life stage.

In The Sims Social and The Sims FreePlay, fulfilling motives/needs will make the Sim inspired, and inspired Sims will earn more simoleons. In FreePlay, giving a Sim a cupcake will instantly fill the Sim's motives.

Note: These numbers below are approximate as there are no numerical indication for motives.

All large pets in The Sims: Unleashed, The Sims 2: Pets, The Sims 3: Pets and The Sims 4: Cats & Dogs share these motives:

Other pet motives are: 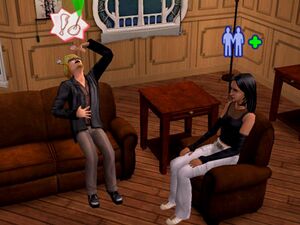 A Sim suffering from severe hunger.

A Sim will react to low motives through urgencies. When a need becomes too low, a Sim will have a thought bubble with the image of that need over their head and will make a motion, such as holding themselves if they need to use the bathroom, or by clutching their stomach and pointing at their mouths when hungry.

Sleeping Sims with low needs often have nightmares about the low motives. Sims with low needs tend to wave at the player and complain, and will not learn any new skills until their mood improves. They will also refuse to do several actions. Visiting Sims whose needs fall too low will leave in order to fulfill them.

If a motive is not fulfilled and is fully depleted, motive failure will occur. This will have major consequences to the Sim. In The Sims: Livin' Large, if most of the family members are in a bad mood and the Tragic Clown painting is on the lot, the Tragic Clown may pay a visit.

Below are the list of motive failures and their final effects.

Retrieved from "https://www.thesimswiki.com/w/index.php?title=Motive&oldid=956138"
Categories:
Hidden categories:
Cookies help us deliver our services. By using our services, you agree to our use of cookies.