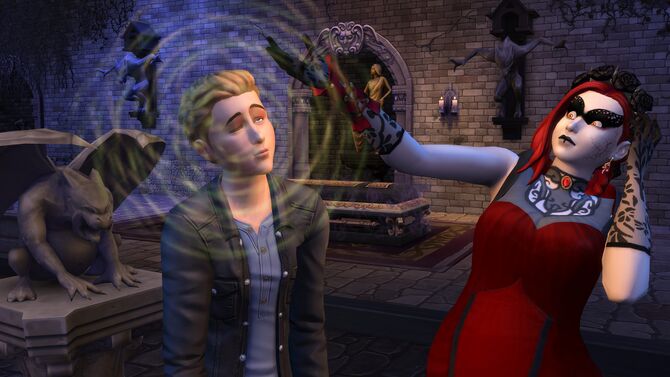 The Sims 4: Vampires
Game pack for

The Sims 4: Vampires is the fourth game pack for The Sims 4.[1] It marks the return of the vampire lifestate and adds the residential world Forgotten Hollow. Sims can now become immortal and unleash supernatural powers. It is the first game pack on the console version of The Sims 4.[2] Vampires were previously found in The Sims 2: Nightlife, The Sims 3: Late Night and The Sims 3: Supernatural.

It's Time to Live the Immortal Life
Transform your Sims into powerful vampires and live for eternity in an eerie new destination with The Sims™ 4 Vampires. Create a variety of vampires using all-new tools and unlock unique Powers that give your Sims supernatural abilities. Escape to Forgotten Hollow, build a lair and hang out with other immortals.

Create Vampires – With all-new Create A Sim options, create vampire Sims that are alluring or frightening. Choose their fangs, add mysterious glowing eyes, even customise a unique Dark Form to transform into when enraged or spooking other Sims. Baby, toddler and child Sims will not become vampires until they are teens. While they are teens vampire Sims, they develop a “strange taste for blood”.

Unleash Supernatural Powers – Earn and wield dozens of unique Powers that give vampires the ability to control Sims’ minds and conjure spiritual energy. Balance your skills by taking on weaknesses and unlock new Powers by winning epic duels to advance your rank.

Escape to Forgotten Hollow – The dark, mist-covered land of Forgotten Hollow is the perfect place for vampires to socialise and let loose. Visit the abandoned mansion to discover its secrets, collect ingredients for gruesome new recipes, or move in and build your own lair.

Live the Immortal Life – Experience the life of a vampire and choose how to live. Will you drink from Sims or eat Plasmafruit to quench your thirst? Embrace evil and stir up trouble or blend in and start a vampire family? Whatever you choose, always avoid sunlight and garlic foods.

Vampires introduces the vampire life state with a whole bunch of new supernatural powers and abilities. Vampires can alter their appearance between their regular and dark forms, and can use supernatural abilities including super speed, turning into a bat, super strength, etc. Vampires can be made straight from Create a Sim and have their own special CAS options, such as an alternative "dark" form, editing their eyes to be unnatural eye colors, pale skin tones, different fang types, and veins. Sims can also ask vampires to be turned. If they comply, the vampire will bite the Sim and then offer them their blood which the Sim will drink. Sims will not immediately transform, but will get the "Strangely Hungry" moodlet which causes their hunger need to drain.

Vampires will have their own panel to gain and upgrade new abilities that make them more powerful. They can choose certain powers as they gain more experience and become stronger. There are a total of 25 powers, divided evenly (5 per each Vampire Rank), with several powers having their own tiers (up to a maximum of 3). Also some powers conflict with certain weaknesses, preventing you from picking them.

Vampires also have different needs to normal Sims. Vampires do not need to cater to a bladder meter and their energy need is elongated and replaced with "Vampiric Energy" as well as the hunger need being replaced with a "Thirst" need for plasma. The needs panel also showcases the experience to achieve the next vampire rank and the power points.

Just like aliens from The Sims 4: Get to Work, vampires have a Sim form and an alternative form in which they can switch between to keep their vampiric presence from being revealed. They will switch into their "Dark Form" to turn into their true vampiric nature and access some of their supernatural powers, such as feeding and turning other Sims. The Dark Form can be fully customized separately from the normal form in CAS.

Retrieved from "https://www.thesimswiki.com/w/index.php?title=The_Sims_4:_Vampires&oldid=963398"
Categories:
Hidden categories:
Cookies help us deliver our services. By using our services, you agree to our use of cookies.