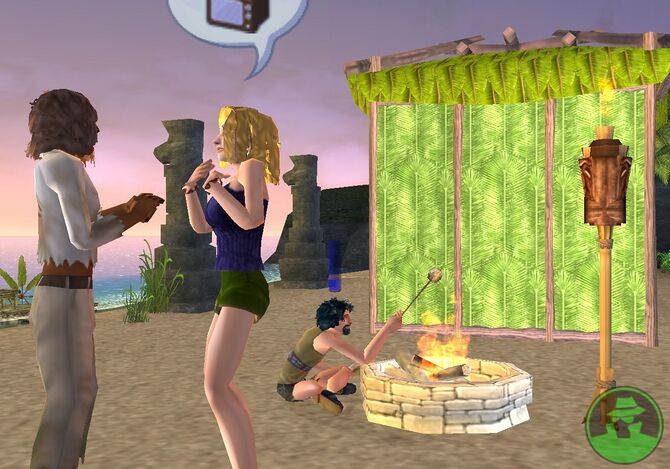 The Sims 2: Castaway
Sixth console title in The Sims series

Not to be confused with The Sims Castaway Stories.

The Sims 2: Castaway is the third console spin-off of the video game The Sims 2. It was released in the United States on October 22, 2007 and October 26, 2007 in Europe for the Nintendo DS, Wii, PlayStation 2 and PlayStation Portable. The game was not released for Windows, but an equivalent version called The Sims Castaway Stories was released on January 29, 2008.

The game is also referenced in The Sims 3, where a TV has a case for The Sims 2: Castaway inside of it.

The game begins on a boat (named Simplicity) after the player creates a crew. The crew can consist of one to six Sims. After the crew's creation, a slide-show starts of some mobile phone pictures that are taken showing the trip and also showing the storm that wrecks the ship. The player's starting Sim wakes up on First Beach, Shipwreck Island. The Sim finds books detailing the goals the Sim must follow to survive on the islands and escape. Shortly after exploring Shipwreck Island, the Sim discovers a second island, Airplane Island, and builds a raft to reach the new location. After arriving on the island, the Sim is reunited with some of his/her lost crew during the player's exploration of the island. The player then has the option to form a tribe of Sims if the relationship level is high enough. While exploring Airplane Island, the player will find radio parts that are crucial to completing a goal later in the game. A third island, Volcano Island, can be reached once the player finds the second beach on Airplane Island and builds a canoe. On Volcano Island, the player will discover the remains of the llama people. The player has the chance to return to civilization on this island. They can either build a boat or travel to the volcano's summit and use the radio parts to send an SOS to a nearby ship. Also, the player can repair a broken ceremonial forge on Volcano Island that will cause a fourth island, Crystal Island, to rise out of the sea.

The user finds many "books" along the way that give him or her various quests to follow to complete the game. These can be completed in any order. They can also befriend local chimps on the island and marry other Sims.

Sims can die if their hunger motive drops too low, much like other games in the series. The Grim Reaper will not appear when this happens; instead, their gravestone will appear a few moments after their death. The game ends when the player loses all of their playable Sims.

Unlike in the PC/Mac equivalent The Sims Castaway Stories, there is no free play mode in the console version of Castaway. However, players can still opt to keep playing the game after completing the final goal, which is to escape the island by sending an SOS message or building a boat.

Retrieved from "https://www.thesimswiki.com/w/index.php?title=The_Sims_2:_Castaway&oldid=939008"
Categories:
Hidden categories:
Cookies help us deliver our services. By using our services, you agree to our use of cookies.