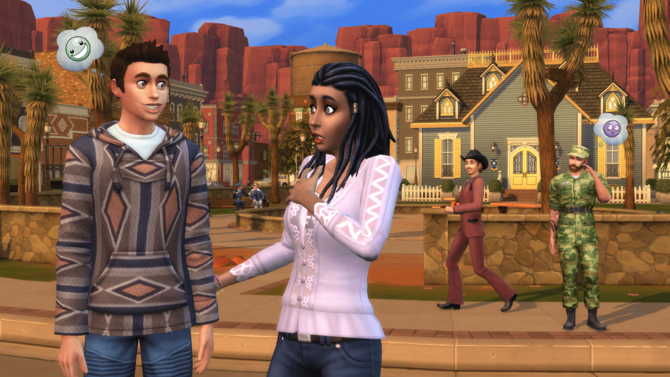 The Sims 4: StrangerVille
Game pack for

The pack is largely focused on a linear storyline, where various sims in a rural desert town named StrangerVille are all infected and the player has to find the cause and a cure. Other new features include the military career, listening device, lava lamps and the possessed emotion.

Solve the mystery of a desert town that holds a deep, dark secret.

Start your investigation and solve the mystery of a desert town that holds a deep, dark secret.

Unravel the Story – Immerse your Sim in unique and mysterious events. Unmarked vans appear in neighborhoods, government agents use secret listening devices, and scanners are key in detecting the unusual.

Crack the Code – Have your Sims investigate using their Military training, searching for clues to solve a mystery that lies within the secret lab.

Suit Up Your Sim – Get Sims in the mystery-solving mood by gearing them up in desert-inspired clothing and military fatigues, or prepare them for the end with conspiracy-themed clothes, secret agent attire, and a hazmat suit.

StrangerVille adds the desert town of StrangerVille, where Sims have to solve mysteries and puzzles in order to cure all the local residents. They can also join the military semi-active career, where they can become either a grand marshall or take the path of a covert operator.[1] The pack includes a new aspiration and trait.[2]

When the player first loads the town of StrangerVille, some town locals are clearly infected with a mysterious illness: a possessed emotion, a strange walkstyle and talking gibberish about a "Mother Plant". Strange blue alien plants also dot the town. It is up to the player to investigate by talking to locals and explore the secret lab in order to find a cure for this strange illness.

Retrieved from "https://www.thesimswiki.com/w/index.php?title=The_Sims_4:_StrangerVille&oldid=965980"
Categories:
Hidden categories:
Cookies help us deliver our services. By using our services, you agree to our use of cookies.