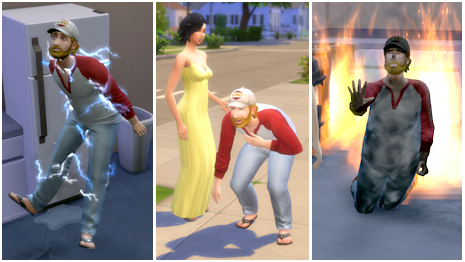 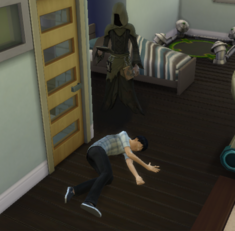 Death is the permanent state of existence in which a previously living Sim, pet, or other creature ceases to live. Causes of death range from natural causes (brought on by reaching the end of the elder life stage), accidents, player neglect, or through the deliberate player choice(s). While most causes of death are realistic, there are a few fictional causes of death as well. 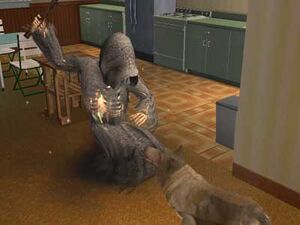 Unlike most legends of the Grim Reaper, he seems to be a kind being in The Sims series. His personality is perhaps a reference to the personified Death character in Terry Pratchett's "Discworld" novels. His nice side shows when a Sim with a gold or platinum aspiration bar dies of old age, during the animation of a pet's death, or resurrecting kids with the Resurrect-O-Nomitron.

In The Sims Livin' Large, The Sims 2, and The Sims 4, a living Sim who is on the lot can plead with the Grim Reaper, asking him not to take the newly deceased Sim. The chances of success are determined by the relationship of the pleading Sim with the newly deceased, and pure chance. In The Sims, the Grim Reaper may be in a bad mood, and bring the deceased Sim back as a zombie. In The Sims 2, it is not possible to plead for a Sim who has died of old age. Also, it may not be possible to plead for a drowned Sim, as living Sims will not be able to get to the Grim Reaper if he is out in the water. However, if The Sims 2: Apartment Life is installed, an infallibly good witch or warlock with 9 or more magic skill can use the spell "Expello Mortis", which will reach further out, though it will not be able to reach the middle of a very large pool. Also, in The Sims 2: FreeTime, Sims who have summoned a genie and successfully wished for the power to cheat death can plead for their own lives even if they are in the middle of a pool or have died of old age. In The Sims 4, Sims cannot plead for the dead Sim's life before the actual reaping begins.

In The Sims 2: Pets, the Grim Reaper plays a different animation for pets that die.

In The Sims 3, Sims can beg for their own life depending on the mood they were in when they died.

Sims will leave behind a gravestone or an urn after they die. These can be moved around the lot or sold like any other object in buy mode. In The Sims, the appearance of gravestones is randomized except for pets[TS:U] and for Sims who are famous.[TS:S] In other games, the gravestone that appears may depend on their aspiration level,[TS2] the number of lifetime happiness points,[TS3] or the life state they were in.[TS4]

In The Sims 2, a deceased Sim's closest friends and family members will inherit a small amount of money through life insurance. If a Sim is married or joined at the time of their death, any community lots or vacation homes owned are inherited by their spouse. In The Sims 4, no such monetary inheritance takes place, although items in a deceased Sim's inventory will be transferred to their offspring who live in the same lot. All Sims who witnessed the death, including those not particularly close to the deceased Sim, will receive a very sad moodlet for 48 hours (though household members who were not in the same room as the deceased Sim at the time of death will not be affected). Sims who witnessed the death of an enemy will receive a happy moodlet.[TS4]

When all Sims die in a household, or there are only children in the household (as in the case of The Sims 2 and later games), a game over occurs. In The Sims 2, any orphaned babies, toddlers, or children will be taken away by an on-screen social worker, whereas in The Sims 4, a message indicating that the orphaned Sim(s) will be cared for by social services will appear.[n 1] In addition, when all teen and older household members die, all businesses owned will be released back to the community (even if the deceased Sim has a living offspring residing somewhere else) and their prospective owners can generally only buy them as unfurnished lots.[TS4][n 2]

In The Sims 2: Open for Business, if all the visiting Sims of the owner's household die on a community lot that they own, the Grim Reaper will close up shop and send all the customers away. If there are still living Sims in the household back home, the game will transition back to the residential lot after the Grim Reaper leaves.

Although death is typically a state of absolute finality, the spirits of dead Sims are often left to roam the world as ghosts, where they can still interact with the world around them. 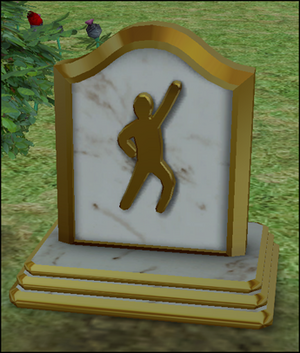 The Golden Grave of a Sim who died of old age with the Pleasure aspiration.

Death, however, isn't always permanent. With a wide range of items and/or cheats, a Sim can be given a second chance at life.

In The Sims 3, there is a special plant called a Death Flower. If a Sim is carrying this flower in their inventory at the time of their death, when the Grim Reaper shows up, the ghost will offer him the flower. Seemingly deeply moved by this gesture, the Grim Reaper will proceed to instantly resurrect the Sim. A Sim can be resurrected once for every Death Flower in their inventory. However, it seems that the Sim in question will suffer from any lowered motives, just to a lesser degree, so it is incredibly important to use this second chance to raise these motives before the Sim dies again.

Players can utilize various cheats, objects, or game features to intentionally kill a Sim. This may be done for multiple reasons. Methods include:

Prior to The Sims 2: Bon Voyage, Sims could not die on community lots. Townies may sometimes be unable to die if they are not selectable. In the initial release of The Sims 4, Sims could not die of starvation outside of their home neighborhood, although this limitation was removed in later updates.[which?] In The Sims Stories, the player's Sims cannot die during the main storyline.

In The Sims 3, due to the way gravestones are spawned, Sims cannot die in areas outside of lots. For example, when a Sim starves while standing on a road, the Sim will not die.

In addition, pregnant Sims are unable to die of most deaths, though they may still receive negative moodlets.[TS3]

Sims can be killed in a variety of ways which vary by game version. These include death by fire, shock, starvation, flies, being eaten by the cow plant and being scared to death. 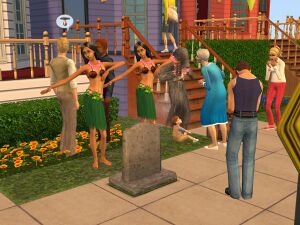 Other causes of death[edit | edit source]

Some things that can kill Sims do so by causing a death from the previous list. The following events do not directly kill the Sim, but cause death indirectly, usually by lowering a Sim's motives to the point of death.

Sims cannot permanently die in The Sims 2 (GBA). Having motives that are low will cause the Sim's performance meter to start to drain, and when the meter is completely drained, they pass out and enact a death scene, and then recover in the Manager's Suite, where the manager then informs the player that the show's ratings has gone down due to fans not liking wimpy Sims.

Sims cannot die in The Sims 2 (Nintendo DS). They will pass out when losing all their sanity, and recover in the Manager's Suite. They lose their sanity by having a low hunger or hygiene need[citation needed]. They can also lose sanity by performing poorly received actions in a social interaction, however this does not cause a Sim to pass out. This is the same with The Sims 3 (Nintendo DS). 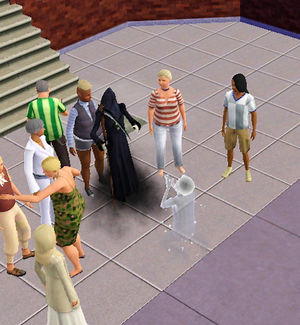 A Sim who died on the street. 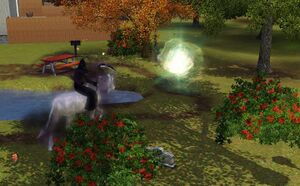 The death of a unicorn in The Sims 3: Pets. 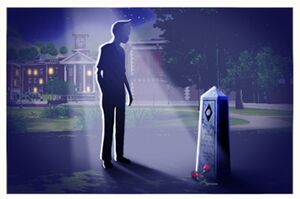 The cutscene when the Sim dies in the mobile version of The Sims 3.

There is no animation of Sims dying in the mobile version. Instead, an "In Memoriam" dialogue box appears and then shows a scene of a silhouetted Sim looking at the deceased Sim's grave with a light shining down on it. Tapping on the screen will bring the player back to the main menu. 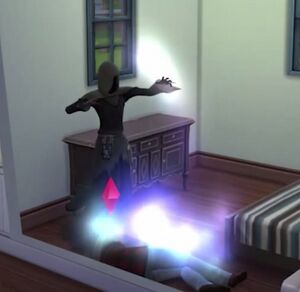 The Grim Reaper reaping the soul of a dead Sim who died of starvation.

Some of the deaths in The Sims 4 include hunger, fire, old age, electrocution, laughter, anger, and embarrassment.[4]

Games where death is not possible[edit | edit source]

Not all The Sims games have Sims dying. Below are the games where it is impossible to have Sims die.

Retrieved from "https://www.thesimswiki.com/w/index.php?title=Death&oldid=966750"
Categories:
Hidden categories:
Cookies help us deliver our services. By using our services, you agree to our use of cookies.