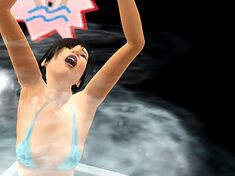 Drowning typically occurs when a Sim suffers from critical motive failure while in a swimming pool or other body of water. Drowning normally requires the player to force the Sim to drown as Sims will usually get out of a pool before they drown, if they are able to do so. A Sim will eventually drown in a pool when there is no means of getting out. In The Sims and The Sims 2, deleting a pool ladder takes away the Sim's only means of escape. However, in The Sims 3 and The Sims 4, Sims can climb out of the pool without a ladder, so players who want to keep a Sim from getting out of a pool must use a wall to block them. When Sims can't get out of a pool, they will continue swimming (and complaining of motive failure) until their energy is used up. When this happens, they will die of fatigue. Also in The Sims 3, player can use cheats to lower the hunger need of swimming Sims, thus making them starve and drown. In The Sims 4: Get Famous, Sims can also die by drowning in the Luminary's Exotic Water Garden, if they jump or fall into it while the pond is full of hungry fish.

When a Sim drowns, the Grim Reaper arrives as usual. However, players generally cannot have another Sim plead with him as with other means of death, as Sims will not be able to get to him while he is in the in the middle of the pool. Therefore, Sims who have drowned likely have no chance of regaining life unless they are resurrected.

However, two expansion packs for The Sims 2 provide exceptions to this. If The Sims 2: FreeTime is installed, a drowned Sim who had successfully wished for the power to cheat death can plead for their own life. If The Sims 2: Apartment Life is installed, an infallibly good witch or warlock with at least level 9 magic skill can use the spell "Expello Mortis", which can reach out and remove the Grim Reaper, though it will not be able to reach the middle of a very large pool.

In The Sims 2, the ghost of a Sim who has drowned will be a shade of blue and will often create puddles or flood a room while they walk about. Other Sims may have to mop this up. Sometimes they will leap into bathtubs and start the bath water. Afterwards, they will jump out.

Sometimes, in The Sims 3, the first time the player attempts to send a Sim who had drowned and has recently been resurrected via the Science Lab, that Sim will either refuse, or get the "Drowning" moodlet. Also, if a Sim dies while in a pool, it still may be counted as drowning even if the Sim dies from another cause, such as starvation.

In The Sims 3: Pets, if a pet runs out of energy in a pool, they will teleport out of the pool. Pets can actually get the "Drowning" Moodlet. However, there is a bug where they will still have the "Drowning" moodlet after teleporting out. When it runs out, they will drown, but the game treats the animation as death by old age (pets). Instead of being red or blue depending on their lifetime happiness, the ghost will have the same blue texture as the drowning ghost for Sims, minus any ghost effects or noises.

In The Sims 4, the ghost of a Sim who has drowned has hydrophobia (fear of water) and leaves puddles around, similar to The Sims 2.