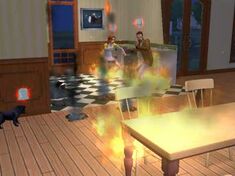 Fire spreads rapidly. This is a very serious problem in The Sims.

Fires can break out in Sims' homes, burning furniture and objects. In general, fires can start from cooking accidents, using objects that use fire, machinery malfunctioning, or magic. Fires cannot start on community lots, but can start in owned businesses.

A fire can spread from its original tile and will eventually burn objects, but if it is extinguished early enough, the objects can be saved. Urns or tombstones cannot be burned. Fire makes the build and buy modes unavailable, so Sims or objects cannot be moved out of the way, and fire alarms can't be bought.[n 1]

A fire can be extinguished by any Sim, but Sims can also die in a fire. It is therefore better to call a firefighter. If a fire alarm is in the same room as the fire, the fire department will automatically be called. In most games, the Sim extinguishing the fire will "generate" a fire extinguisher to put out the flames. However, in The Sims 2 for consoles, a fire extinguisher must be bought before a Sim can put out a fire and is offered for purchase in buy mode. The player can also go to Classic Mode and put out the fire using the action.

The fire message in The Sims 3.

The most common way for a fire to start is through a cooking accident. A Sim is more likely to start a fire when cooking a meal for the first time, or one that they have just enough cooking points to be able to make. Even a Sim with 10 cooking points may start a fire when cooking a very difficult meal like lobster thermidor or Baked Alaska. Also, Sims can set themselves on fire when lighting the flambé on a Baked Alaska or Crêpes Suzette.

Fires can happen in a few different situations:

A fire caused by a Sim launching fireworks indoors. 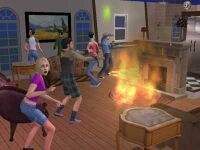 Placing a rug in front of a fireplace is not a good idea.

A low cooking skill will result in this.

NOTE: In The Sims 3, fires are much more likely to start when using cheap fireplaces, grills, or stoves. Leaving a fireplace burning for more than a couple Sim days is not advised, as it increases the chance of the object catching fire, unless they standardly have or have been upgraded to no longer catch fires. 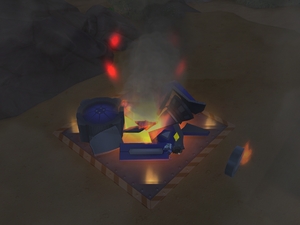 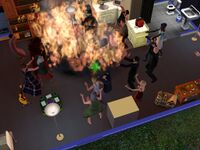 Fire in the room causes a Sim's needs to drop quickly, and Sims will panic, stopping all actions to run towards the fire and complain, becoming completely useless. While the player can cancel the "Fire!" action and tell the Sims to move away from the fire, they are likely to ignore that command and go back to the fire. Sims who have learned Fire Prevention[TS2:AL] or have the brave trait[TS3] can be partially immune to this. In The Sims 3, Sims are smarter and give the player more time to choose an action, although choices are limited as many interactions are disabled. In The Sims 2: Apartment Life, The Sims 3: Supernatural and The Sims 4: Realm of Magic, evil witches, warlocks and spellcasters will not react to fires that they start.

In The Sims 2, Sims observing a fire will lose hygiene rapidly, and if they catch on fire, all of their needs will begin to drop very quickly, eventually resulting in death. Other Sims can extinguish a Sim who is on fire, but it is impossible to tell a Sim that is on fire to do anything else. However, in The Sims 2, Sims who have not realized that they are on fire can be told to extinguish the fire, though they will eventually realize they are on fire, and panic.

In The Sims 3, fire will no longer cause Sims' needs to decline, though a burning Sim will receive the "On Fire!" moodlet. If not extinguished within 1 game hour (30 minutes if the Sim was already singed) the Sim will die. The Sim will have the "Singed" moodlet for a while after being put out. The singed Sim's hair will also be very messed up. In The Sims 3, Sims can walk around while on fire; burning Sims can use a pool, shower, or dive well[World Adventures] to extinguish themselves.

In The Sims 4, Sims that catch on fire will receive a tense "I'm on Fire!" moodlet. If the Sim isn't extinguished in time, they will die. The Sim will have a tense "Singed" moodlet for 18 hours after being put out. When a sim puts out a fire by themselves, they will gain the Confident Moodlet.

Sims will receive a negative memory if they witness a fire.[TS2][TS3] If the fire occurred at home, they will get a memory for that, even if they were not home at the time of the blaze.[TS3] 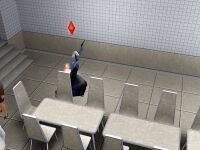 A Sim on fire, in The Sims 3.
Many Sims will have a fear of fire, and lose aspiration points if they see one.[TS2][TS2C] Sims with the daredevil trait may wish to be involved in a fire whereas coward Sims will faint if they see a fire.[TS3][TS3C]

In The Sims 3, if the house of the family that is being played catches fire, neighbors may take notice and will stand outside of the house acting worried. Additionally, if a house next door catches fire and a firefighter[Ambitions] goes to put it out, the other playable Sims on the active lot will run outside and panic as though the fire is on the home lot, and basically do nothing else aside from panicking. This can be considered as an annoyance to some players.

Teenage Sims or older can be directed to extinguish fire by themselves, but it's often difficult because Sims will generally panic around fire, and will not obey to extinguish properly. This will also put the Sims at risk of catching on fire when the fire spreads. In The Sims 3, Sims who have brave, daredevil, or immune to fire trait, or work in firefighter profession can extinguish fire more quickly.

In The Sims 4, as of patch 95 Sims can wear firefighter uniform in CAS, which will give them protection to fire and make them more efficient at putting out fire.

In most games, Sims will spawn a fire extinguisher when directed to put out fire; they don't require to own one to extinguish fires. 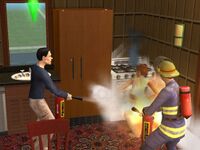 A firefighter and a Sim putting out a fire.

If a smoke detector is present in a room where fire breaks, firefighters will appear immediately. Otherwise, Sims can attempt to call the fire department providing they're not panicking. Firefighters can safely extinguish fire, unless they cannot reach to the fire.

In The Sims 2: University, players can buy a fire sprinkler and place it in front of a stove or fireplace. The fire sprinkler will immediately extinguish fire in a 5x5 area, but will leave watery mess.

In The Sims 4, players can purchase a fire sprinkler panel. Instead of placing a sprinkler on top of a hazardous objects, this panel can be placed anywhere on the lot. When fire breaks, a sprinkler will automatically appear above it and extinguish the fire. The sprinkler will only appear if there is ceiling above the fire, and will not leave puddles.

In The Sims 2: Seasons, rain will eventually put out exposed fire.

In The Sims 3: Pets, unicorns can extinguish fire without using magical energy.

In The Sims 2: Open for Business, Sims can construct a HydroBot with bronze robotics talent badge. A working HydroBot will put out fires it can reach.

In The Sims 4: Get to Work, Sims can invent a SimRay with invention constructor to extinguish a fire.

In The Sims 3: Supernatural, Bonehilda will awaken or stop what she is doing and attempt to extinguish a fire.

In The Sims 3 Pets for consoles, casting the "Bless the Mess" karma power can extinguish fires and replace burnt objects for free. The power takes about ten seconds to extinguish these flames. Sims will stop panicking and will begin to cheer when the fire disappears.

This Sim will die if not put out soon.

If a Sim catches on fire they can die. Catching on fire causes a Sim's needs to drop very quickly. In The Sims, Sims who catch on fire are destined to die and cannot be saved. In The Sims 2, Sims have a short period of time to be extinguished, and if still on fire at the end of the period, they will die.[2] In The Sims 3, Sims will get the "On Fire" moodlet for an hour, and will die when the moodlet expires. In The Sims 4, Sims will get the "I'm on Fire!" tense moodlet, and will die if not extinguished in time. It is not possible for a Sim who is on fire to leave the fire behind by teleporting. They will still be on fire at their new location.

The Grim Reaper will come when they die. The Grim Reaper may pass through another Sim who is also on fire, extinguishing the flames from that Sim. It is not known whether this is a bug or a feature.

Sims who die by fire will have a flame as their grave symbol.[TS3] Death by fire has its own ghost type. In The Sims 2, the Sim appears red and smoking; in The Sims 3, they appear orange with an animated flame and smoke "texture"; and in The Sims 4, they will emit smoke from their body. They will sometimes swim in pools or in the sea.[TS2:BV] While these ghosts are not always angry or violent, they are more likely to be unquiet, causing them to sometimes get easily angry at anybody. In The Sims 4, ghosts who died by fire will also set off continuous fires when they're angry. 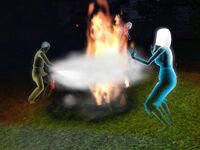 SimBots and ghosts can still freak out when fire breaks.

Servos,[TS2:OFB] SimBots,[TS3:A] and plumbots[TS3:ITF] are naturally immune to fire, but will still panic at the sight of one. Ghosts are not affected by fire, although ghosts in The Sims 3 will still react to them. Genies have the hidden Immune to Fire trait, but do not appear to be naturally immune, meaning that genies may burn to death if the hidden trait is removed.[confirmation needed]

Objects that have been completely burned and destroyed will leave behind a pile of ash that must be swept up. These ash piles cannot be removed in build or buy modes without the use of the moveobjects cheat. Maids, butlers, Servos, and Bonehilda can be tasked to sweep up ashes. In The Sims 2: Open for Business, Sims can craft a CleanBot to clean up ash piles.

In The Sims 3 and The Sims 4, the insurance company will reimburse the active household for any objects destroyed by the fire. Clicking on a burned object provides an option to replace the object for its original price. In The Sims 3: Supernatural, witches can cast a fire blast spell and put it out (or aim it in range of an active sprinkler), and will still be reimbursed for the fire, even if nothing is damaged and the fire was intentional. This can be a way to gain easy money.

Sims can only get this trait if they are the offspring of a firefighter Sim. The trait allows them to set fire to random objects and they get positive moodlets for doing so!

Fire Fighters are able to survive countless fires; not because of their natural immunity to fire. It's a trait that they pass on to their children.

Sims that are Naturalists don't need to fear fire; it won't touch them, and they can extinguish it with ease.

This Sim died in a fire, and flames haunt them still.

Retrieved from "https://www.thesimswiki.com/w/index.php?title=Fire&oldid=966687"
Categories:
Hidden categories:
Cookies help us deliver our services. By using our services, you agree to our use of cookies.