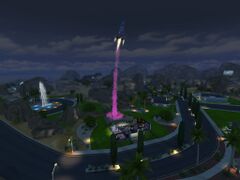 Rocket ships are objects introduced in The Sims 4. They allow Sims to explore space and bring alien pets and rare collectibles. It is also a place where Sims can WooHoo.

There is only one rocket ship that can be bought normally, called Steampunk Flyamajig. The other two rockets can be accessed by leveling in the astronaut career. When the base plate of the rocket ship has been placed outside, Sims can start building it. When building, the rocket has three stages to build through: the bottom part, the middle part and the top part, with each of them taking a long time to be built. When building a rocket ship, Sims gain the rocket science skill.

When in space, various missions that are similar to chance cards from The Sims 2 and The Sims 3 will appear. Depending on the choices the player makes and the upgrades installed on the rocket, Sims may receive good outcomes, such as obtaining collectible aliens and positive moodlets. If things go awry, Sims may crash the ship (with a possibility of dying) or receive negative moodlets.

Fun: 10
+ Rocket Science Skill
Notes: Unlock by reaching level 10 of the Astronaut career while in the Space Ranger branch.

Fun: 10
+ Rocket Science Skill
Notes: Unlock by reaching level 10 of the Astronaut career while in the Interstellar Smuggler branch.

Retrieved from "https://www.thesimswiki.com/w/index.php?title=Rocket_ship&oldid=959189"
Categories:
Cookies help us deliver our services. By using our services, you agree to our use of cookies.