From The Sims Wiki, a collaborative database for The Sims series
(Redirected from The Sims 2 Pets (console))
Jump to navigation Jump to search 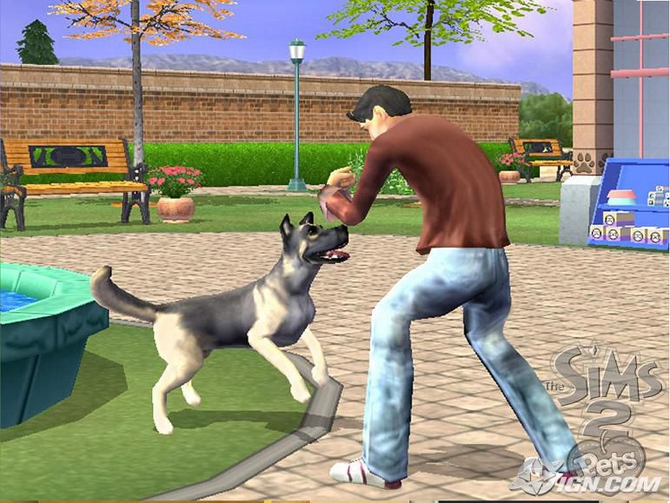 For other uses, see Pet (disambiguation).

The Sims 2: Pets (referred as The Sims 2 Pets in-game) or simply Pets for consoles is the fourth installment in The Sims console series. Based on the PC expansion pack, it features a much less goal-oriented system, and is more like the free mode of previous games. The main element in this game is that the Sims can own pets which can be customized and looked after.

The console version of The Sims 2: Pets plays similarly to the PC version. It is available on GBA, GameCube, Nintendo DS, PlayStation 2, PSP, Wii, and N-Gage platforms. It was released for the Wii on June 13, 2007. It was also the first console Sims game not to be released on the Xbox.

This game is different from the previous Sims console games as the player isn't forced to accomplish goals which wasn't the main idea of the original Sims. The player creates and controls the Sims they make. In this game there are pets which you are supposed to look after.

As with all Sims games, Sims must get jobs to earn money and live a successful life. There are many different choices of jobs, each with a group of separate jobs to move through as you progress, one promotion at a time. Sims earn promotions by checking the requirements of the next promotion available in their job in the career section of their personal info. They will need to raise certain skills, which will not only get your Sim to start climbing up the career ladder, but will also make your Sims faster and better at everything they do in their day-to-day life. They will also need to build relationships with their neighbors as interpersonal skills. Sims will start out their job with a low pay, a simple outfit, and a cheap cab as transportation, but as relationships and skills build, they will improve their levels and eventually, everything will be first class.

When a Sim reaches a certain level of friendship with another Sim, as in all games, it unlocks a series of romantic actions, which are not limited by gender. Sims can get married, cheat on other Sims (this happens when one lover catches the other lover attempting a romantic action on another Sim; they will usually sigh, argue with your Sim, move out, and your relationship will be dragged down to either 0 or -100), attack each other, break up, date (this is just shown by getting lots of calls and kissing whenever they meet up), move in with other Sims, ask other Sims to move in with them, and once they are married, they will be able to go to the bathroom, shower, and take baths with no problem even when the other Sim is in the room, and they will be able to sleep in the same bed without one of the Sims getting up and lowering the relationship. They can also lower their relationship with another Sim to the enemy status, in which instead of romantic, mean actions appear, including things like push, shove, poke, and attack. Sims cannot, however, WooHoo or have a baby. The level classifications of Sim relationships from lowest to highest are arch nemesis, enemy, acquaintance, friend, and best friend. For pets, the highest level with Sims is "master" in the case of dogs, or "mine" in the case of cats.

Differences between the console and computer versions[edit | edit source]

Sims can also be just as creative with different foods in this game as with any other Sims game. They can choose from various different ingredients from lots of different categories (the foods available depend on the quality of the fridge), and they can even harvest their own foods like fruits and vegetables from home-grown plants and bushes and fish from aquariums. Sims can make freestyle food or follow recipes, each with its own effect on your Sim, not just in bladder, hunger, and energy, but emotionally, too. Sims can then create various different meals with their stoves, energy drinks with their blender, and even homemade pet food with their food processor. Sims may also make group meals if they have enough of everything, get a snack in the form of a crisp packet, or simply get a basic pre-made generic meal. Sims can also purchase a grill, which will give them a nice barbecue at $25 apiece. If they are lucky, whilst searching the couch, Sims may also find an old half sub sandwich. It may be disgusting, but Sims will eat it, and it will cure the hunger motive after a while. Sims may also find money hidden in the couch occasionally.

One feature of this game and The Sims 2 (console) is the mysterious Zombie Monkey Paw, which can be found when searching a couch. When found, it will fulfill a random motive of that Sim. As would be expected, it is usually found in the more expensive couches, while it's more likely to find an old sandwich in the cheaper ones.

The main pets available in this game are of course, dogs and cats, which are highly customizable, but Sims can also buy The Piggle Puffs (a cross between a guinea pig and a hamster, in a cage), which they can feed, play with, and clean, but Piggle Puffs may escape from their cage. The player may also own a goldfish that they can get at the Pet Emporium in the Town Square which you have to feed and clean, along with the various aquariums.

Pets can be adopted at the Pet Purveyors, although they can't be customized if obtained this way.

The only keys to expanding families are pet adoption via the Pet Purveyors in the Town Square (in which pets can also be sold), marrying another Sim and asking them to move in. If a Sim asks another Sim to marry them or to move in, they will move in on their own and may take pets they had a high relationship with them, but if the rest of that Sim's family only consisted of pets, which cannot live on their own, they will take all of them, and decline the invitation or marriage proposal if there is not enough room in the family they're moving to. Also, on rare occasions, completely stray pets or pets that have run away from their homes may visit, in which case the player will be able to check the microchip, and if the pet doesn't have one, the stray can be taken in.

If the player would like to decrease the number of occupants in their house, there are a few ways.

If married to a Sim and the relationship is lowered enough, there will eventually be an option to break up with them, in which case they will automatically leave the house with any pets that may have had a higher relationship with them than they did with you and some of the family's money. A Sim can also be asked to move out no matter what the relationship, and the same things will happen.

When a Sim moves out, they will become available in the Real Estate Office for move-in with the usual starting amount of money (§20,000, no matter what they took from the previous household) and the pets they took with them.

As for pets, they can be taken to the Pet Purveyors in the Town Square to be sold, or they can be neglected (remove shelter, food and play) and they will eventually run away. Groups of pets that were neglected may take longer to run away, as they will always want to stay together. Once a pet has run away, the Police Department can be called to report the missing pet, and hope that they find it. They won't always succeed. If left on their own after running away for a long amount of time, pets may become long gone, but for a while, they will usually just appear on other Sim's lawns or the Town Square as strays.

A pet's offspring usually looks like the parent of the same gender, i.e.: The mother dog is black and white, the father is brown and rust, the puppy is a female, so it will be black and white with a few rust-colored flecks. Occasionally, when mixing breeds of dog, the puppy will be the same breed as one of the parents, with no hint of the other breed, i.e.: When interbreeding a black Poodle with a russet-colored Collie, the offspring will be a dark brown Poodle, because the poodle has such a bizarre body and fur coat, and there is no way to mix it with the collie. It is also common to breed to dogs that may even be almost exactly the same and yet still get a completely unique-looking offspring. Some splashes of color including green, pink, blue, and others can also be found on puppies or kittens. 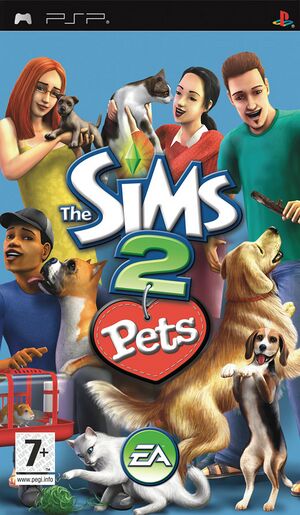 Cover art for the PSP version of The Sims 2: Pets.

The Sims 2: Pets for the PlayStation Portable is very similar to the console version, albeit with more limited gameplay options. The object limiter is much tighter, due to hardware limitations, and the player can build their Sims' homes only through special layouts, with 1, 2 or 3 bedrooms, which are unlocked by Aspiration points. Create-A-Sim is much more limited as well, and does not includes clothing styles rather than separate outfits. The entire Whiskerton is limited as well, as there are only 4 buildable lots, of which 2 are inhabited, one by the Newbie family, which also serves as a tutorial.

As the player progresses through the game by raising relationships and fulfilling wants, other Sims are unlocked. Players cannot start a game with these Sims but they can move them into already inhabited households by marrying them or simply increasing their relationship points with them enough to ask them to move in. Until a Sim is unlocked they will not appear around the Town Square or visit/be seen walking by their home. It is known that the last Townie family to unlock is the Howard family

Here are a list of the townies Unlocked and the aspiration points totals:

Changes from earlier The Sims games for consoles[edit | edit source]

Retrieved from "https://www.thesimswiki.com/w/index.php?title=The_Sims_2:_Pets_(console)&oldid=920131"
Categories:
Hidden category:
Cookies help us deliver our services. By using our services, you agree to our use of cookies.