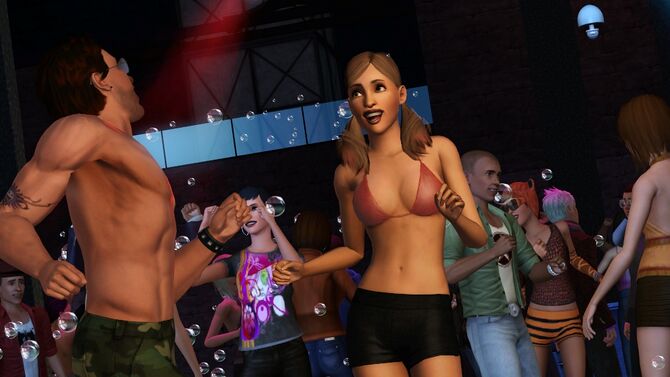 The Sims 3: Late Night is the third expansion pack for The Sims 3. Its announced features are reminiscent of features also included in The Sims: Hot Date, The Sims 2: Nightlife, The Sims: Superstar, The Sims 2: Apartment Life and The Urbz: Sims in the City. The game was released on October 26, 2010 in North America, and in Europe on October 29, 2010.[2]

For the first time ever, your Sims can experience late night fun as a VIP! Get your Sims an all-access pass to the hottest spots in town. Whether they mingle with celebrities or enjoy a casual night with friends, your Sims’ social lives are getting a boost! But keep in mind that some scenes are more exclusive than others, so make sure your Sims have the right connections to get past the bouncers at the hottest clubs. Wherever your Sims go, they’ll discover new things to become—adored celebrities, all-night partiers, rowdy bandmates, or vampires. What will your Sims get up to after dark?

The Sims 3 Late Night gives players all-access to and lets them loose on a vibrant, active downtown scene where they’ll rub elbows with celebrities at the hottest parties, hit the local bar after work, tour the scene with their Sims’ band, kick back in a plush hot tub, and discover what’s lurking as the lights go out and adventure begins after dark.

Players will be able to take their Sims into the bustling urban setting where they’ll be able to become local celebrities, members of music bands, mixologists, directors, and more. To gain entrance into the most elite clubs in town, Sims need to keep their attitude in check, otherwise they’ll be given the cold shoulder by tough bouncers -or they can find another way onto the list. If chilling is the player’s forte, their Sims can lounge at a chic club or dive bar. Or, if they like to live on the edge, they can discover the secret of becoming a vampire.

Whether embarking on a new career, painting the town red, or throwing a party on the rooftop of a penthouse, it’s always up to the player to tell their unique stories with The Sims 3. What will happen when the lights go out and Sims get all access?[3]

It was confirmed on July 20, 2010 at EA's Studio Showcase 2010.[27] According to an official sneak peek at Late Night, it would offer players a more mature, realistic and urban environment when compared to earlier similar expansions.[9] Previews of the expansion described it as being more about friend outings than dating[12][28] and to be more simulation-driven instead of opportunity-driven as the first two expansions[24] were.

Late Night has been featured at a few real-life and internet events.

EA holds an annual Studio Showcase where upcoming games are featured. This page show the Late Night segment for 2010. The video was originally available for live streaming through GameSpot at 1 PM PST (21:00 UTC) and was archived at the same address afterward.

On July 29, 2010, The Sims 3 Producer Grant Rodiek was on The Sims 3 twitter answering questions submitted by players about the Late Night expansion pack, as well as other upcoming developments.

GamesCom is the largest trade fair and event highlight for interactive games and entertainment. It is based in Cologne, Germany.

This is a list of artists and their songs that were featured in Late Night:

Retrieved from "https://www.thesimswiki.com/w/index.php?title=The_Sims_3:_Late_Night&oldid=962377"
Categories:
Hidden categories:
Cookies help us deliver our services. By using our services, you agree to our use of cookies.