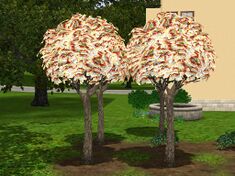 "Simoleon" trees in The Sims 3.

The Simoleon (§) is the unit of currency used in the SimCity and The Sims series. It is assumed to be the national currency of SimNation. While in The Sims, Simoleons resembled US dollar bills[confirmation needed], The Sims 2 onwards made them red, orange, and white.

Its value can vary between titles, and doesn't consistently reflect any real-life currency (such as the US dollar or British pound), as many of the more expensive items are marked down in price, while some of the cheapest may be marked up; for example, in The Sims 2 an SUV costs approx. §4000, while a pizza costs §40. Usually, items of limited duration are more expensive, while durable objects or house structures are cheaper. This reflects the fact that a Sim has less time to earn money in the series than would be available in real life. Much like the real world, better quality items are generally more expensive. Also, the simoleon has no sub-units; the only way something can cost less than §1 is for it to be free.

In SimCity, a stretch of road is §10 per segment and a Police Department §500. According to the SimCity 2000 "City Value" menu, one § unit that represents the cost of a building actually equals §1,000.

In another Maxis game, Spore, the Sporebuck symbol in both the Civilization and Space Stages (§) is the same symbol as a Simoleon (§).

In The Sims Medieval, Simoleons are known as Simoles although the § character is still used to represent them.

How much money can Sims have?[edit | edit source]

Console versions of The Sims,[1] The Sims Bustin' Out, The Urbz: Sims in the City, The Sims 2, and The Sims 2: Pets only display 6 digits.

In The Sims 2: Apartment Life, a new rule for figuring starting money has been added. The amount of starting money depends on the number of Sims in the family and their ages.

In The Sims Medieval, Hero Sims will start with either §12,000 or §1,000, depending on whether or not their house is furnished or unfurnished.

Sims need a minimum amount of money in order to buy food and pay their bills. Leaving bills unpaid for too long results in either a visit from the repo-man[TS][TS2][TS3] or in electricity and water systems being shut.[TS4] (In the handheld versions of The Sims Bustin' Out and The Urbz: Sims in the City, Sims/Urbz who skip their bills are arrested instead.)

There are several ways for Sims to receive a steady income. The usual way is to work in a career or profession[TS3:A] that gives the Sim a regular salary or stipend. Owning a business[TS2:OFB][TS4:GTW] is another way to make money, though income from a business is not as steady as the income from a regular job, as the Sim does not get paid a salary.

Some Sims can make money through creative endeavors, such as painting or writing. In The Sims 2: University, The Sims 3[3] and The Sims 4 Sims can collect tips while playing an instrument. There are a number of crafts Sims can partake in, where the objects they create can be sold. In The Sims 4: City Living, Sims can set up street tables and galleries in order to sell their collectibles and paintings with the price being freely decided from 0% to 300%.

Investments[TS3] are another way Sims can earn money. A Sim can buy a partnership in one of the rabbit holes in a neighborhood and collect weekly earnings. As of Ambitions, Investments are not limited to rabbit holes, and Sims can buy into almost every community lot, being challenged to upgrade it in order to make even more money.

Sims can make money by completing opportunities[TS3] and choosing wisely when given a career chance card[TS2].

Sometimes money is just lying on the ground. Random phone calls may be able to net Sims a few extra Simoleons.[TS] Collecting objects that are littered around the neighborhood could net a Sim some money. One Sim's trash is another Sim's Simoleons! Sims can rummage through garbage and occasionally find something worthy.[TS3] Sims in lots that have the "Penny Pixies" lot trait can find randomly money from the ground.[TS4:CL]

Money grows on trees. The money tree grows Simoleons. With some care Sims can "rake" in the cash. Money falls from the sky when Sims wish for wealth from the Genie[TS2:FT][TS3:ST] or the wishing well.[TS2:S]

Some Sims are born to steal. Kleptomaniacs can steal objects that they can then use, sell or give back to the original owner.[TS3][TS4] Fraudulent Sims can try their hand at counterfeiting. Genuine Buck's Famous Counterfeiting Machine is an aspiration reward that allows a Sim to print bills.[TS2:U] Hacking is another great and fast way for Sims to gain massive amounts of money.[TS3][TS4]

Some players also like to take the easy route. A player can move their Sim(s) into another occupied house and then move the existing members out enabling the player's Sim(s) to steal their house and money without the need of cheats.

(e.g. familyfunds Bachelor 2000 sets the Bachelor family funds to 2,000 Simoleons). For familyfunds to work in The Sims 3, testingcheatsenabled needs to be activated. Unlike The Sims 2, this cheat can only be used when a family is moved into a lot.
(e.g. money 50000 sets the current household's funds to 50,000 Simoleons). For this cheat to work, testingcheatsenabled needs to be activated.

(e.g. money 50000 sets the current household's funds to 50,000 Simoleons). Only affects the household that is currently being played. For this cheat to work, testingcheats needs to be on.

Retrieved from "https://www.thesimswiki.com/w/index.php?title=Simoleon&oldid=949900"
Categories:
Hidden category:
Cookies help us deliver our services. By using our services, you agree to our use of cookies.