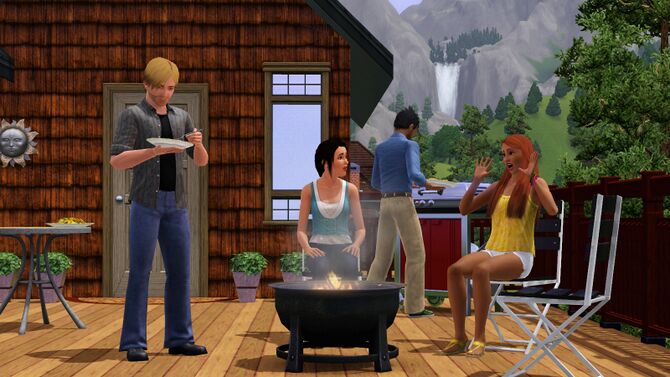 The Sims 3
Seventh console title in The Sims series

For other versions of The Sims 3, see The Sims 3 (disambiguation).

The Sims 3 is a console game, developed by Electronic Arts for the Xbox 360 and PlayStation 3[1]

For the first time ever, players could upload and download content via Xbox Live and PlayStation Network, including player creations from the Exchange for free, and new items released by EA, which costed a fee. As of July 2018, the Exchange for consoles has been shut down.

Create Sims with unique personalities, fulfill their desires, and control their lives within a living neighborhood that you can customize. Unlock all-new Karma Powers and unleash them on your Sims: help your Sim get lucky with the power of “love connector”, bless them with the power of “age defiler” or "instant beauty" or curse them with an "instant enemy". Use these powers wisely, because they may have unexpected results! As you guide your Sims through life, you can complete challenges to unlock additional items, new buildings and landmarks.

EA released downloadable content for The Sims 3, both paid and free, which were available from the PlayStation Store and Xbox Live Game Marketplace. This content is no longer available with the closure of the Exchange.

The trailer for the Sims 3 console was released on June 14, 2010. It shows many of the original features of the Sims, such as cycling around town and changing Sims' appearance. It also shows the newly added features, such as 'Karma Powers', such as when a female Sim is exposed outside a restaurant, leaving her totally nude with only the blur to cover her, presumably after doing something bad. It also shows that, unlike previous games, players are allowed to build more than one floor onto buildings. Another feature shown was the ability to have children in the game, unlike its predecessors (The Sims 2, The Sims 2: Pets, and The Sims 2 Castaway). The 2nd E3 trailer features the Kris Allen song, "Live Like We're Dying" and shows the possibility of the aging system as the trailer shows Sims life memories of when they were younger as well as one point of the trailer showing the 6 life stages from The Sims 3 as well as an elderly man with the Grim Reaper. The aging system was later confirmed by Sam Player in an interview with GameSpot.[7]

This is a list of artists and their songs that were featured in The Sims 3:

Reviews have been generally positive with Gameblog.fr giving 3 stars saying that it will "satisfy fans of the series".[9] GameSpot gave a 7/10 praising the new features given to the console version but criticized the performance and load times.[10] However, Game Informer scored the game with 9/10 on the 360 and PS3, praising The Sims Studio for the console controls and the all new features, commenting that "The console edition of Sims 3 plays just like its PC predecessor".[11][12] Currently, the PS3 version of the game is scored at 77/100 at Metacritic,[13] while the Xbox 360 version is scored at 76/100.[14]

The Sims 3 for Console has received many criticisms when it came out such as the glitches, features and pricing.

Like The Sims and The Sims 2 below it, the game has received mixed reviews from players with players comparing it to the PC/Windows Version despite features are returned that were only on Windows and Mac OS X such as Children.

The Sims 3 has a save game glitch that causes the game to freeze when saving it. On May 18, 2011, EA released an update via Xbox Live and PlayStation Network fixing this issue.

There is a glitch that has been going on for quite a while on the PS3. When downloading the DLC and Updates, it will freeze at a random percentage, then eventually will show that the download is 100% complete and freeze. This renders the game unplayable. As of now, no one has found a solution to this glitch.

Unlike The Sims 3 for PCs, there is no open world gameplay. This has attracted criticism from some players.

Sims that die will be playable as a ghost for five days. Their grave will appear during this time, but will disappear once the Sim is resurrected.

Electronic Arts confirmed that The Sims 4 would receive a console version for PlayStation 4 and Xbox One. It was released in November 2017.

Retrieved from "https://www.thesimswiki.com/w/index.php?title=The_Sims_3_(console)&oldid=958192"
Categories:
Hidden categories:
Cookies help us deliver our services. By using our services, you agree to our use of cookies.