From The Sims Wiki, a collaborative database for The Sims series
(Redirected from The Sims 2: Store Edition)
Jump to navigation Jump to search

Players were able to shop at The Sims 2 Store online using real money to purchase items from expansion and stuff packs. Exclusive store items are also released for players to purchase using SimPoints. Players can purchase SimPoints with the rate being $1 = 100 SimPoints. Items range from 25-250 SimPoints. The store closed while in Beta.

The client could be downloaded from EA officially, and was also pre-packaged with Apartment Life, Fun with Pets Collection, University Life Collection or Best of Business Collection. Although being worthless now, it is still packaged with all new copies of these expansions.

It is possible to run it in Windows 98 SE,[2] Windows 2000, Windows Me and Windows 7. It does not work on Mac OS X, but Boot Camp can be used to run it. Although The Sims 2 Store Edition is only available in the US and Canada, it is possible to run the game outside of North America in regions such as Europe and Latin America.

The Sims 2 Store Edition can no longer be downloaded from EA. However, players purchasing certain The Sims 2 expansions on Origin, such as Seasons or Pets, will see Store Edition appear in the download list, although it is still useless.

Before the closing of The Sims 2's official site, players were greeted with a screen saying that the Store had closed whenever attempting to access it. 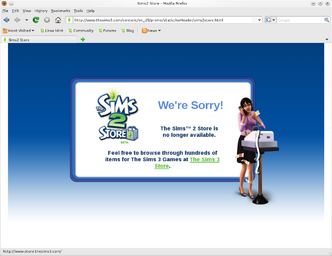 The screen that was displayed when players tried to access The Sims 2 Store after its closing.
This is similar to how The Sims Carnival told users to visit The Sims 3.

The Sims 2 Store Edition requires the user to have The Sims 2, any expansion from Pets onward and the EA Download Manager installed.

Retrieved from "https://www.thesimswiki.com/w/index.php?title=The_Sims_2_Store_Edition&oldid=955445"
Categories:
Hidden categories:
Cookies help us deliver our services. By using our services, you agree to our use of cookies.